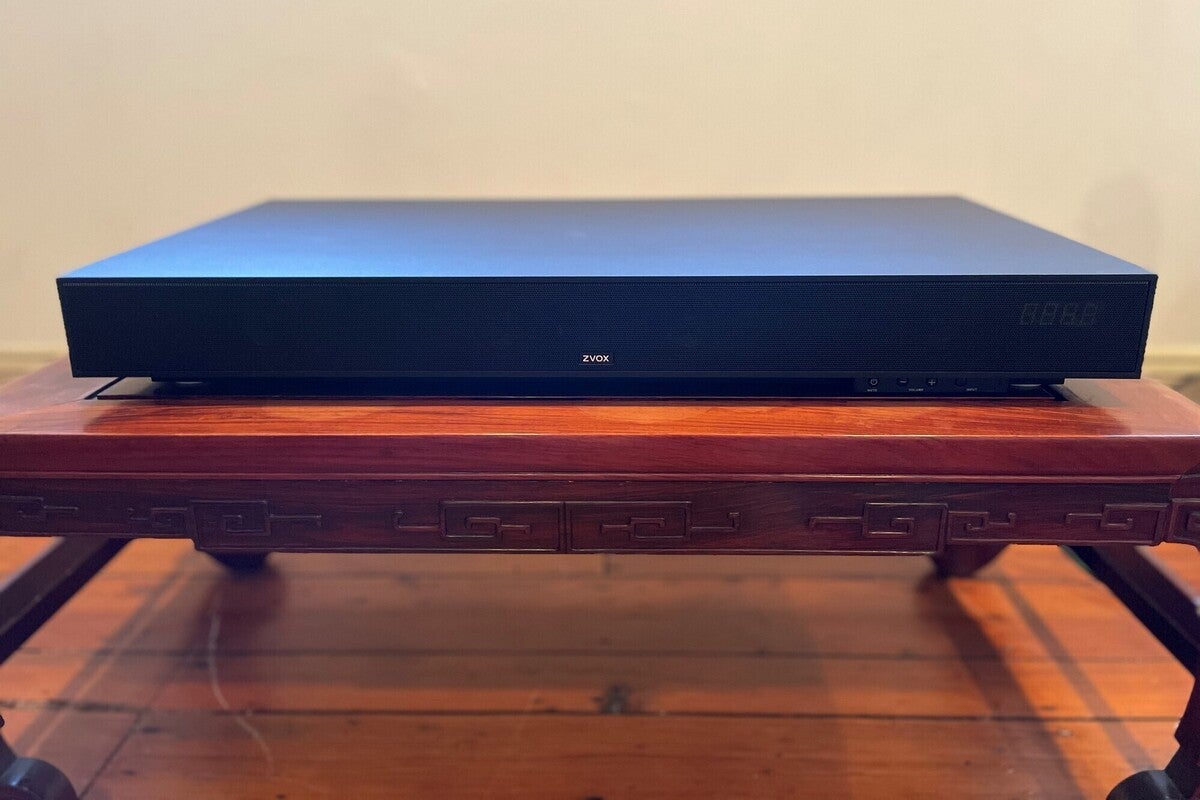 Zvox pioneered the soundbase, an all-in-one speaker system that sits beneath a TV, as an alternative to the more common soundbar that sits in front of a TV (or mounted on the wall beneath a TV likewise installed). Today, the Zvox SoundBase 440 is one of the few speakers of its type still on the market.

Packaged in a plain black enclosure that lights up its hidden display only when you switch settings, the SB440 is a good representative of this tech-without-clutter species. Self-starting without any fuss when it detects an incoming audio signal, this amplified speaker system is far more capable of pumping up the dynamics and fidelity of TV sound than the speakers stashed inside the typical flat-panel television. And it does its handiwork in a tidier fashion than a soundbar with a discrete subwoofer cluttering up the floor.

This review is part of TechHive’s coverage of the best soundbars, where you’ll find reviews of competing products, plus a buyer’s guide to the features you should consider when shopping for this type of product.

This thing plays loud and proud, doesn’t miss much, and articulates trebly details especially well. Zvox quotes a frequency response of 50Hz-20kHz (+/- who-knows-what dB), with 45 watts of Class D amplification apportioned amongst five full-range 2-inch drivers and a 5.25-inch subwoofer, all of which fire downward in a ported enclosure. The step-up and step-down bass and treble settings are subtle, not aggressive even at the extremes. But that independently amplified sub will kick decent butt with soundtrack kabooms and music that really thumps.

The SB440’s other audible allures might be even more compelling for some. An especially effective voice clarification process called AccuVoice is Zvox’s ace in the hole—it might even be reason to upgrade to this product instead of a competitive soundbar or a 5.1-channel home theater system. Switchable output leveling is helpful for taming loud commercials, too. A sense-tricking, quasi-surround process called PhaseCue sends signals flying across a much wider sound field than you’d expect from a box measuring 28 x 14.5 x 3.5 inches (WxDxH). Lastly, its $249 list price (on sale for $199 at press time) won’t burn a major hole in your wallet.

From one of many, to one of a kind

But industry trackers knew the soundbase party was pretty much over when Sonos stopped manufacturing its Playbase—one of the best-reviewed of the species—just three years after its debut. (You’ll still find them at some retailers and online from Amazon, but the model is no longer touted or sold on Sonos’ own website.) Beside this Zvox, the only soundbases we’re now spotting “in stock” are cheap knockoffs from the likes of Magnasonic, Pyle, Seiki, and TimoLabs.

Who popped the balloon? Blame set makers. Starting around 2014, TV manufacturers got it into their heads to rethink the flat-screen stand—replacing the weighty and pricey pedestal base in most models with lighter, much smaller, and far less expensive support feet. The little things remind me of bird talons, but they ruined things for most soundbases because—depending on the size of the TV—they were positioned farther apart than the width of the speaker, and the speaker was usually too tall to fit beneath the TV between the feet.

We’ve all heard questionable claims about products that can be “up and running in 10 minutes.” I think I got this thing going in five: Make an audio cable connection (analog or digital) from the TV to the Zvox box. Plug in the power line. Flip the rear-panel power switch. Tap a button on the credit-card sized remote. Done!

That said, there is some heavy lifting to be done. The SoundBase SB440 itself weighs a hefty 15.3 pounds, its enclosure being crafted from MDF to both reduce cabinet resonance and to support the weight of a 55-inch or smaller TV weighing up to 70 pounds (you’ll need to lift that, too, of course). I paired the speaker with a 32-inch Vizio plasma first, and then a 55-inch Panasonic plasma.

I used a Toslink optical cable in both cases, but a coaxial input is also available. You can use both to connect the speaker to independent sources, but one of those sources must be powered off for the other to function properly. You’ll also find two sets of analog stereo inputs (RCA), but that’s it—there’s no HDMI, headphone jack, or Bluetooth for wireless connections. But the jack pack is sufficient if your important A/V products are plugged directly into the TV’s HDMI inputs. And honestly, the core users of this rig probably have simple, straightforward needs—they just want to enjoy the dialogue, scoring, and sound effects better. They want a more theatrical movie experience, and this speaker will deliver.

The Zvox paired well with both of my TVs, but my experience with the bigger screen was best. Positioned halfway along the long wall in my 21 x 13-foot family room, Zvox’s PhaseCue virtual-surround processing directed the audio outwards, almost to both ends of the room, whilst also pushed the sonic commotion forward a bit into the living space during moments with serious surround effects on the soundtrack. Zvox does deploy licensed Dolby Digital processing with its PhaseCue. The latter works a timing/location number on the brain by blending opposite channel info, out-of-phase, into the left and right speaker presentations while also delivering blended left-plus-right channel info to the center speaker array. The trickery is best appreciated sitting dead center in the sweet spot.

I’ve mostly gravitated to level two for TV shows and music. But I switched to Sd 3 for season four of Netflix’s The Crown to bathe in its big-budget musical scoring (orchestral pomp and circumstance by Martin Phipps, plus Rock of the 80s) and serious sound effects: Flyovers of private planes, the rumblings of tony British automobiles, and rain drops tapping on British-tiled rooftops and hunting grounds.

The curled-tongue royal accents on the show’s soundtrack (especially that of the Prince Philip character, played by Tobias Menzies) provided an apt test of Zvox’s AccuVoice processing as well. There are just two settings for that on this speaker—on or off—but I found the dialogue hard to fathom without it.

Listeners suffering from extreme hearing loss, however, will want to consider the Zvox AV157 soundbar I reviewed earlier, since that speaker’s AccuVoice implementation was fine-tuned by hearing-aid specialists and offers 12 levels of dialogue enhancement. Zvox tells me AccuVoice on the SB440 is on par with AccuVoice level one in some of its other speakers.

While listening to music, I found myself wishing for some way to shut off all the SoundBase 440’s TV/film-centric sound processing. I brought in the tunes by Chromecasting from the Napster and Qobuz streaming services on my iPhone 12 Pro to a TiVo Stream 4K media dongle plugged into the TV. The audio signal then passed out of the telly to the optical Toslink port on the SB440.

Opting for a selection of all things UK music, too, I got reasonable satisfaction from rhythm-minded folk/pop superstar Ed Sheeran (showcasing well on “Castle on the Hill”), the jazz-tronica hipsters Go Go Penguin, and the eternal kings of the British Invasion—still hitting the mark with remastered renderings of “Come Together” and “Hey Jude.”

On the downside, I sometimes felt the urge to fuss with tone controls when shifting from artist to artist and even track-to-track, because the music kept getting thrown off balance, either by the phase shifting or the AccuVoice frequency emphasis. Sheeran’s Afro-beat “Photography” sounded liveliest with Sd 3, bass at plus-3, and treble at plus-1. But on a remastered take of the Beatles’ “In My Life,” those settings corroded the track’s lilting charm, it made the music too hard-edged and brittle. I had to downshift to Sd2, kick up the bass to plus-4, and drop the treble to minus-1 to make it better, better, better.

Perhaps I protest too much. The clock is running out on the soundbase species, and Zvox isn’t about to overhaul its SoundBase 440. If its form factor fits your needs and its audio performance floats your boat, be grateful it’s still being made.