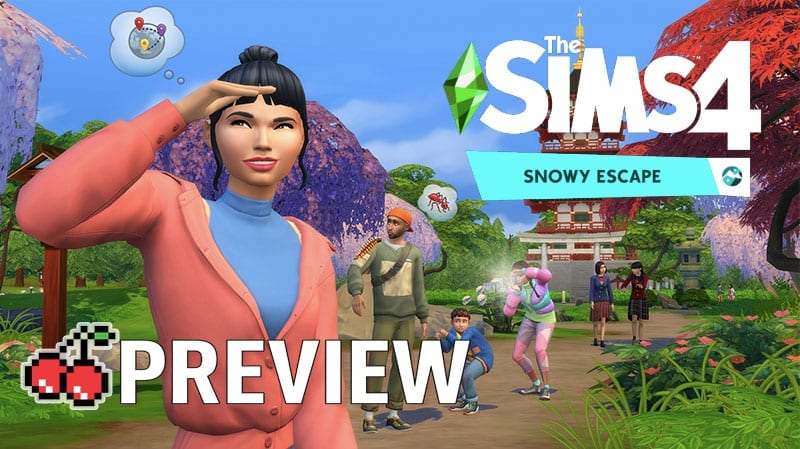 If you’re a Simmer then you know just how much the fandom has been crying out for more gameplay. Sure, the point of The Sims is creative freedom, but it’s easy to list off all the differences between The Sims 3 and The Sims 4 in terms of gameplay (and it’s easy to see the clear winner).

Players often criticise TS4 for giving us some of the gameplay tools without the ability to craft a story out of them. It’s the reason why YouTube Sims challenges like the 100 Baby Challenge are so darn popular.

Enter The Sims 4 Snowy Escape. Does it give you TS3-levels of gameplay we all pray for? No, but it does improve on what we have, with new gameplay elements abound.

Not only does Snowy Escape introduce a proper vacation world for your Sims back in Windenburg to enjoy, but Mt. Komorebi is also an entirely liveable world should they want to permanently move there. That’s a big green tick from me!

New gameplay mechanics will change-up how you play The Sims 4 thanks to the introduction of Sentiments and the new Lifestyles Panel. Sentiments aim to make your Sims more three-dimensional by giving them memories of a sort. Sims will remember bad interactions, or think fondly of their loved ones. It’s minor, it’s nothing new, but it’s definitely welcome in TS4 – especially if you love your storytelling!

The Lifestyles panel is also a fantastic addition to the game. Here we get an additional level of gameplay, as there’s new unlockables for you to achieve. Lifestyles are simply an “expression of a Sim’s behaviours and habits over time,” and include titles like “Workaholic” or “Adrenaline Seeker.” Achieving these Lifestyles can be done through activities relevant to the one you’re aiming for, and you have a daily allowance of earnings on your way to your goal. Once unlocked, you’ll get several perks for your Sims, including new interactions and performance boosts. Again, it’s not groundbreaking, but it’s starting to look like the community is being heard.

So Much New Stuff!

Our preview time with The Sims 4 Snowy Escape revealed that’s there’s a lot more than just cosmetic changes thanks to many new items which encourage togetherness and sharing.

Along with new activities like snowboarding, skiing and sledding, the Pack also introduces a whole heap of new items (including new animations!), such as the Hot Pot meal-sharing around the Toasty Kotatsu Table, along with Japanese-inspired decor that’s truly magical. (There’s even cable cars! Even though you can’t see your Sim use them, they’re a nice addition in the background, and somehow give the appearance of the game being more dynamic).

There’s not just new items though as we also get some new adventure-like gameplay. Taking a meditative walk about the greenery of Mt. Komorebi can lead you to shrines, memorial sites, waterfalls and more. You can encounter forest spirits who transform into items in your inventory, or you can get frazzled by a demon (which, sadly, it just a pop-up notification, but hey, at least the process of a hike itself isn’t just a rabbit hole). Visit one of the local festivals, collect gashapon capsules from vending machines and generally live your best Japanese-inspired life with a whole host of exciting new foods to taste.

The Japanese influence on this Pack makes it stand out from previous Sims 4 offerings (something which is very much welcome). The focus on meditation, family traditions and even the little touches, like Sims removing their shoes when entering their home, make this a stand-out Pack for me. Attention to detail is rife with all the Japanese-inspired elements, from the world design to the new ways in which Sims can interact with each other to show respect.

While the snow sports are fun they’re by no means my favourite thing about this Pack by a country mile.

It’s actually a little odd to see this Pack being marketed as a snow sports pack, when the stand-out features come from the Japanese-like world; the delicious foods, hanging out at the onsen and treating your Elders with respect (yes, that’s a new interaction if your Sim has the “Proper” trait).

While the idea of a Japan x snow sports fusion might seem a little bit odd for a Pack, it’s absolutely the right move for Sims players. For too long we’ve had wholly dedicated Packs with a singular focus. Snowy Escape has its own appeals whether you’re more into the extreme sports or the new focus on mindfulness and Japanese tones.

All in all, it seems as though EA and The Sims 4 team might finally have cracked it with The Sims 4 Snowy Escape. It’s ticking boxes for gameplay, style and substance (and the pre-built residential lots were even created by Sims influencers, so no more shoddy builds!)

So far, this Expansion Pack is looking cooler than Yamachan at the top of Yukimatsu.

The Sims 4 Snowy Escape releases on November 13 for PC, Xbox One and PlayStation 4.