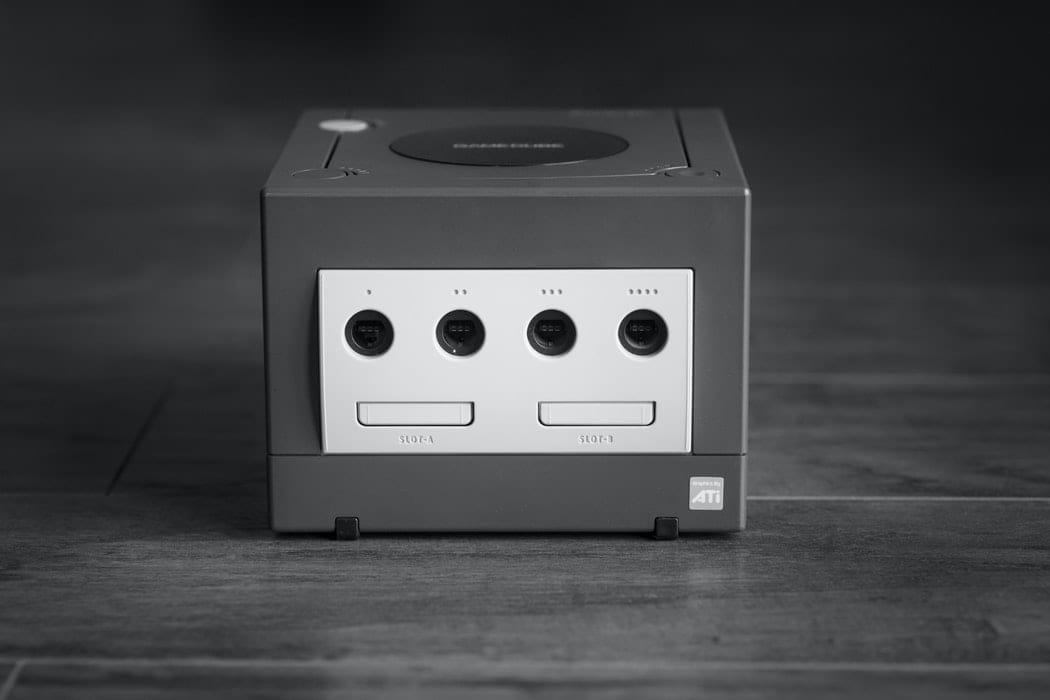 I vaguely remember when the GameCube was initially announced, it was in 1999 and it was dubbed “Project Dolphin”, later to be announced as the Nintendo GameCube in 2000. I thought it was a stupid name but I was excited to see what the N64 successor was all about. Little did I know that this quirky console would forever hold a special place in my heart.

For me, one of the GameCube’s most lovable charms was the size of the console, which was much smaller compared to the likes of the OG Xbox and the PS2. It even had cute game discs, smaller than that of the standard-sized CD. Nintendo decided to use the “GameCube Disc” to avoid paying licensing fees to DVD Forum, which ultimately only enhanced the overall charm of the GameCube.

The dimensions of this beautiful console were a mere 5.9 x 6.3 x 4.3 inches, and it only weighed 2.4kg.  However, despite having a smaller frame than the PS2, the GameCube was heavier, with the PS2 weighing in at a lighter 2.2kg.

The Nintendo GameCube’s more compact size ensured that it had more of a snug fit on the shelf or next to your TV, and it even had a handle at the rear, making it easier to carry to a friend. Okay, I know you could just plonk the GameCube in a bag, but some of us wanted to make the most out of the handle, so don’t judge us.

Stepping Up From The N64 Controller

While the face button layout still baffles me a little today, the size and shape of the controller and the two staggered analogue sticks all made for a very comfy fit in my hand. My love for the controller only increased when the wireless version, called the Wavebird, released in 2002. It became one of my favourite controllers of all time.

So let’s now talk about the main aspect of the Nintendo GameCube: the games. Pretty much as it was with any new console generation back then, the launch windows between each region were often months, rather than days or weeks. The GameCube was released in September 2001 in Japan, November 2001 in the US, and finally in May 2002 for Europe.

If I remember correctly, in terms of library depth, the GameCube lacked compared to the likes of the PS2 and OG Xbox, which perhaps ultimately resulted in its early demise. However, just because the GameCube didn’t have the quantity, it didn’t mean that it lacked in quality because this cute little console had some absolute gems. As I’ve said in previous articles of this nature: “quality over quantity”.

If you like to game across all three brands, I think many of us could appreciate that in terms of console exclusives, the Nintendo systems have often knocked it out of the park. The first-party exclusives from Nintendo often have a high level of consistency, not only with visuals but also with gameplay, and the GameCube was no exception.

This 6th generation console may have ended sooner than its rivals when it ceased production in 2007, but as cliché, as it sounds, many of its games have remained timeless. I remember at the time some were criticising the GameCube for not having many launch titles, and that may have been the case.

However in my book, when a console has the likes of Luigi’s Mansion, Star Wars: Rogue Squadron 2, and Super Monkey Ball among its launch line-up it’s hard to call it a “bad” console. I think the GameCube received an unfair crack of the whip.

Don’t get me wrong, I enjoyed the three launch titles (though there were more) that I picked up, but I was also well aware that the Resident Evil remake was going to release later in the year 2002, and that was the main reason why I had picked up the GameCube. Even long after the Resident Evil remake was released, the GameCube delivered several classics that still more than hold their own today.

The Legend of Zelda Wind Waker was heavily criticised at the time for its cel-shaded visuals, yet if you play that game today even on the original GameCube, it still looks great, and it’s a bloody good game too. The same goes for the Resident Evil remake and the prequel Resident Evil 0, both of which look fantastic to this day. This would be a common trend on this vibrant and underrated console.

For years, fans have been calling for Konami to remake Metal Gear Solid, yet the GameCube did just that back in 2004. Granted, the camera angle may feel a little awkward at times, especially when trying to press Snake against a wall, but Twin Snakes is just one of several timeless classics that I still return to every once in a while. I still enjoy playing these classic games as much as I did back in the day, perhaps more so nowadays.

So where did the GameCube go wrong? As with the SEGA Dreamcast, it’s all a numbers game.

Commercially, the Nintendo GameCube can be considered a flop. For many years I worked in video game retail, and granted you would get some Nintendo fans defending the GameCube without a second thought, but in many cases when I used to recommend this console, customers would turn their nose up. However nowadays with the power of hindsight, I think the GameCube is looked upon quite differently, and more fondly.

We Love The GameCube

I think looking back, you can see why the GameCube failed, and it was largely down to third-party support. Unlike the PS2, the GameCube’s third-party library was pretty…well… lackluster. However, by the time the console ceased production in 2007, Nintendo had released some absolutely classic first-party titles on this charming console.

Out of all the consoles that I own, the Nintendo GameCube is the one that’s stayed with me the longest; at this point, I’ve stopped counting the years. Sure I don’t play it as much as my newer consoles, but the GameCube will forever hold a special place in my heart.

You can never truly part with something that you love and that’s why my Nintendo GameCube will always be at the side of my TV, ready to go the moment when I want to fire-up one of those many timeless classics.

Have you got any fond memories to share of the Nintendo GameCube? Share your stories with us across our social media channels.