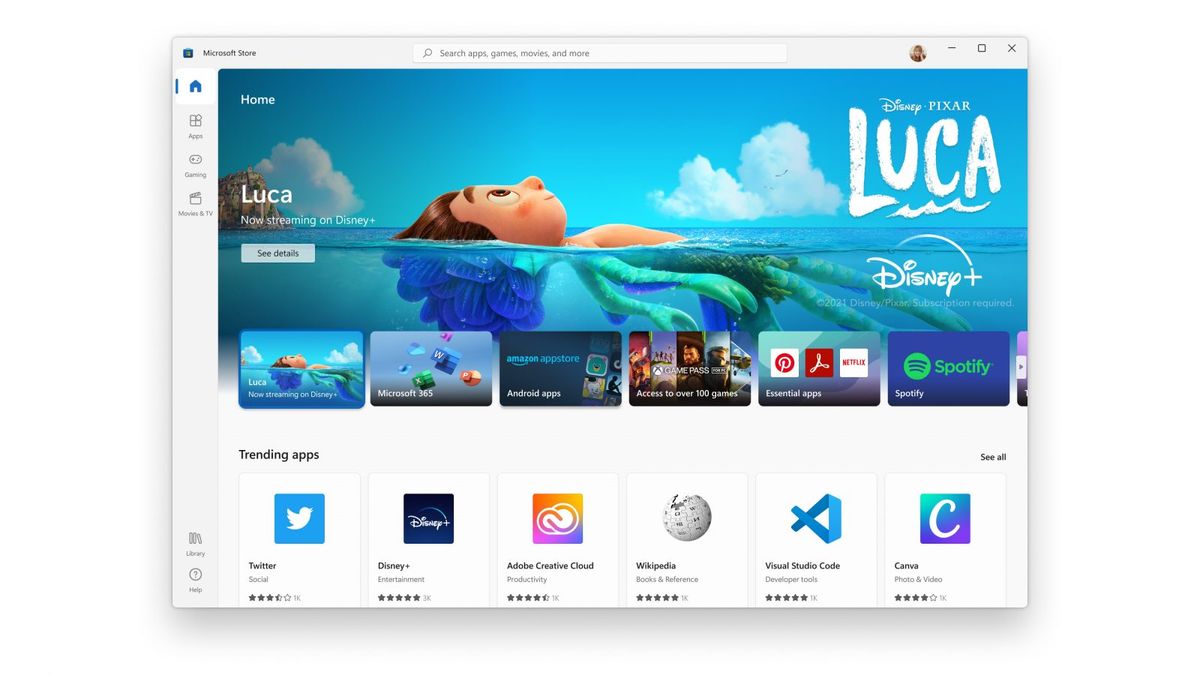 A new Microsoft Store is coming to both Windows 10 and Windows 11. During its Windows 11 presentation on Thursday, Microsoft showed off the store’s new UI and confirmed that it will support a wider variety of app types.

Chances are the only interaction you’ve had with Microsoft Store in recent years was downloading the Xbox app to use Xbox Game Pass and never have to use the store directly again. The store itself doesn’t exactly have the best user interface, and trying to track down the apps you want becomes a chore. The updated digital storefront is shooting to make browsing for new games and apps less of a nightmare.

Aside from the new sleeker look, Microsoft promises an easier-to-use and better-curated digital storefront. “We rebuilt it for speed,” said Microsoft’s chief product officer Panos Panay. “It’s beautiful. So simple to use, search is incredible, and it’s still the safest and most secure way for you to get your apps on Windows.”

Thanks to a partnership with Amazon, the Microsoft Store will include Android mobile games and apps that run seamlessly in Windows 11. Users will also be able to install apps from their browser when they click on a Microsoft Store download badge, without having to open the store directly to download things like Spotify.

The new UI is welcome, but this is probably the most important overhaul to the store: it will now support more app types including Win32, .NET, UWP, Xamarin, Electron, Java, and more.

“We’re making sure every app you need is there,” Panay said during the presentation. “For the developers out there, let me talk to you. First, you’re our heroes. What you do, what you build, it inspires us. But we also want you to be able to bring any technology, the technology you love, to the store. Whether you’ve already built it or are building it now, if it’s a PWA or a Win32 or a UWP, we just want you to be able to bring it to the store. That’s our goal.”

Microsoft clearly wants to bump up developer interest in this new store, and it’s enticing devs with a new option that looks like it will allow them to keep 100% of the revenue they make on in-app purchases.

“Starting July 28, app developers will also have an option to bring their own or a third party commerce platform in their apps, and if they do so they don’t need to pay Microsoft any fee. They can keep 100% of their revenue,” says Microsoft’s official site. Currently, apps and games sold via Microsoft’s platform operate on an 85/15 split for apps and 88/12 for games.

You can check out the new Microsoft Store in the upcoming Windows Insider build and see the differences for yourself. Expect to see Windows 11 launch later this year.