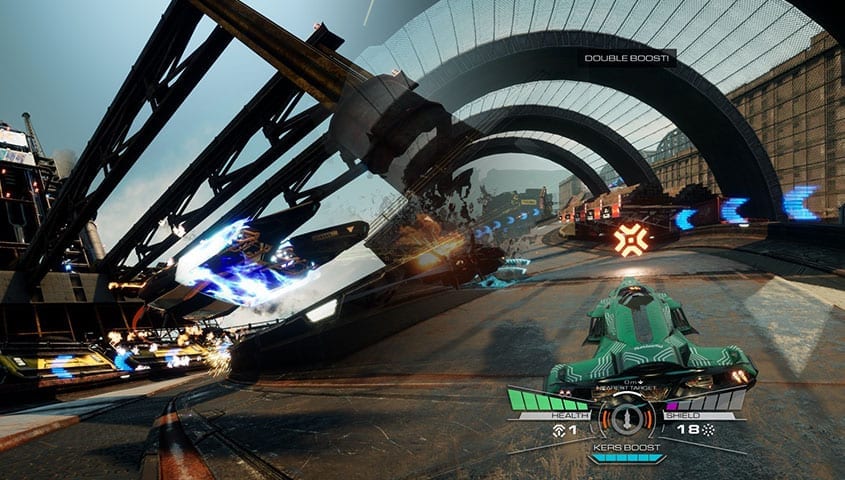 The music of video games has transformed a lot since the days of the 8-bit era. The original tones of classic retro games have given way to sweeping orchestral scores, iconic rock and adrenaline-inducing techno, giving gamers a further level of immersion in everything from RPGs to racers. One game that prides itself not only on its gameplay but its soundscape is PACER, a combat racing experience set in zero gravity. Coming to consoles and PC this October, GameByte spoke with one of PACER’s musicians, CoLD SToRAGE, discussing everything from his WipEout experience to creating music for R8 Games’ next hit.

CoLD SToRAGE (real name Tim Wright)’s lucrative career spans across everything from Shadow of the Beast II to Lemmings to WipEout, and PACER is just the latest in a long list of video game compositions for the creator.

With PACER dropping later this October, we wanted to know more about the game’s music.

“Overall [it’s] quite varied,” explains CoLD SToRAGE when asked about the style of the music. “There is a good selection of music from a number of talented artists, and there’s mine too, lol!

“Style-wise, I think there should be something to suit most anti-gravity tastes, so long as you’re not looking for Country & Western.”

As for CoLD SToRAGE’s input for PACER’s music, you can expect it to sound pretty recognisable if you’re a fan of racing games he’s previously featured on.

“I’ve tried to keep the music very much recognisable as ‘CoLD SToRAGE racing style’ with maybe the odd nod towards WipEout, but I’ve also tried to inject something very PACER into it too,” says CoLD SToRAGE.

“When I was composing the music, I was careful to watch video of someone playing the game, so that I felt it would fit nicely.

“That doesn’t mean it had to be screaming along at 160bpm, in fact many of the tracks aren’t that fast, they just need to give you a nice warm feeling and that drive to finish first!”

Video game music has evolved just as much as the games themselves, not just in terms of the capabilities of modern-day gaming, but also in terms of the development teams themselves. We wanted to know more about CoLD SToRAGE’s experience of the changes we’ve seen – and the ones we haven’t.

“I guess I can only speak from a personal perspective, and also what I’ve heard my peers discuss, but I think that in general, due to the size of modern AAA games, the teams have grown massively… hundreds of artists, dozens of programmers and maybe three or four people working on audio rather than just one person fulfilling all the audio needs,” says CoLD SToRAGE.

“So you have your foley and sound effects specialists, your audio coders, and then you have musicians.

“The latter quite often are not an in-house resource anymore, because it can be difficult to have someone who can hit all the necessary styles with ease and produce something quickly.”

For us non-game composers, it might not be too surprising to hear the scale on which game music now operates. However, it definitely hasn’t always been that way.

“In the late 80s and early 90s it was expected that as a games musician you would come to the table with your music, sound effects, and some code to play your audio that the developers could add to their codebase and call once per frame,” says CoLD SToRAGE.

“You’d be expected to understand how much processor time you had to play with, and how to deal with blending music and sound effects at the same time. Fast forward only a decade, and all that had been split-up between several people, and the jack-of-all-trades-masters-of-many were not so sought after.

“Sad? I guess, in a way. However, if your preference is one particular aspect, then it’s quite freeing, but it does put you in competition with a lot more people. As things stand now, if you’ve not already made a name for yourself and built up some contacts, then starting afresh is quite the fight.”

“I’d love to say that I sit in a darkened room, with incense burning and slip into a zen-like state, then slide my chair over to the mixing desk, fire up an assortment of exotic synthesizers… pop on a 3D headset, imbibe some mind altering substances and let my hands dance on the keys for hours until a stunning opus reveals itself,” jokes CoLD SToRAGE when asked about his creative process.

“When I came back, I decided to just let the creative juices flow, whilst watching the game on YouTube with the sound turned down – plenty of examples of people playing the game on various tracks, and slowly the music just evolved.

“I composed two of the tracks 4 years ago, when the project was called Formula Fusion, so I also revisited these after composing all the new tracks, and that was fun. In the end, I hope my music conveys the open vistas of PACER, along with a bit of a nod back to the influencers that came before it.”

As for how to create sound to invoke the best experience for the player, that all comes down to “being” the player.

“This is quite simple really,” CoLD SToRAGE explains of his creative process, which stretches from WipEout to PACER. “You have to ‘be’ the player, not just the composer or the sound effects artist. Don’t create a sound or write a tune that you want to write for the sake of it, you should develop the audio with your mindset firmly inside that of someone actually playing the game.

We still have a couple of days until PACER comes to both PC and console, but if you’re picking it up, you might want to keep an ear out for CoLD SToRAGE’s own favourite track.

“From my own contributions to the game I’d say ‘TARG’ is my favourite. I know I wrote it, but each time I listen to that track I get an adrenaline rush and tingles. Something about the melody and how the song builds – it’s an inspiring track I think?

“As for the other contributors, I’d have to go with DubFX – love his work, and any of his tracks hit the mark!”

If TARG gets your skull vibrating when PACER releases, you’ll be glad to know that – with a little luck – we might be seeing (or hearing!) more of the track in the future.

“It’s actually reasonably understated and I’d love to do an even more epic mix of ‘TARG’… who knows, maybe I will?” teases CoLD SToRAGE.

As a game series which has inspired some of the music from PACER, we had to ask: would CoLD SToRAGE like to work on a new WipEout game?

“I was approached really late with WipEout Omega, and I offered any and all of my music free of charge,” says the composer. “Sony were gobsmacked by that, but it was too late… the game was already in creative lockdown, so they couldn’t add any more music.

“In principle, of course I’d be happy to be approached if they do revive the brand!”

PACER comes to PC, Xbox One and PlayStation 4 on October 29th. Wishlist it on Steam here! For more on CoLD SToRAGE, check out his website and SoundCloud details here!