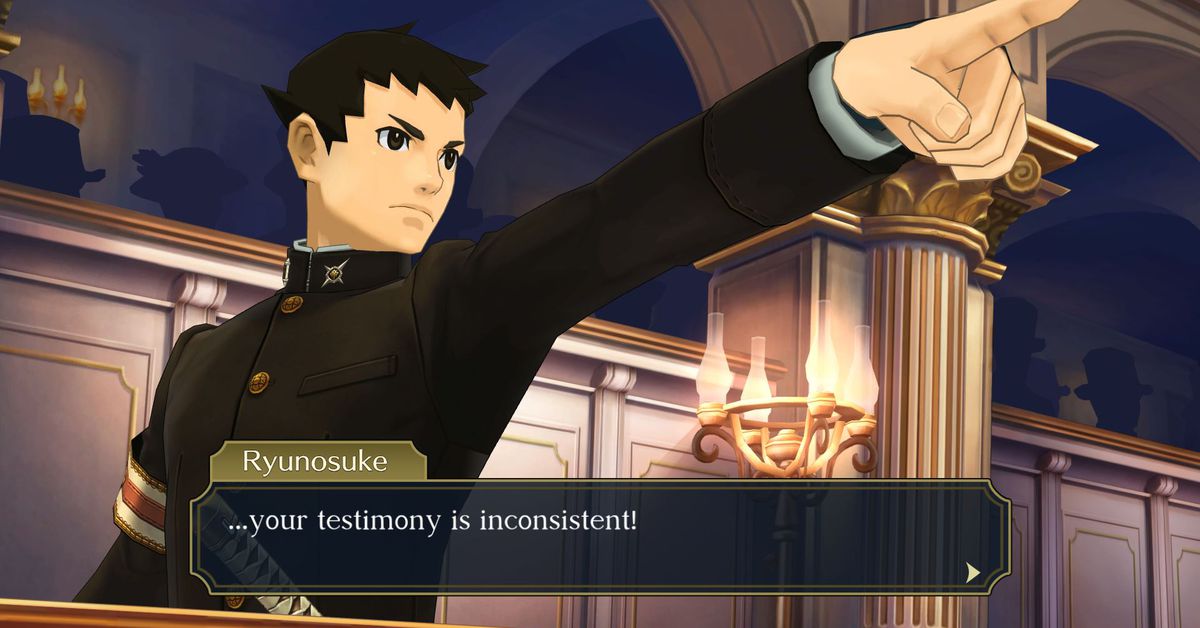 The success of the long-running Ace Attorney series hinges on great writing. Like most visual novel-style games, the quirky legal dramas involve a lot of text, with players reading dialogue and poring over clues in order to help their seemingly doomed clients. This means that localization is particularly important — as each new entry is translated from Japanese to English, localizers need to make it approachable for a new audience while retaining what makes it special in the first place.

The Great Ace Attorney Chronicles, the latest entry in the franchise, provided an extra challenge. While most titles take place in the modern day, the new game jumps back in time to near the end of the 19th century and features characters and plotlines connected to both Meiji-era Japan and Victorian England. “I think the more difficult parts of this game’s localization lie in the way the historical context compounds the cross-cultural issues,” says localization director Janet Hsu. Against this backdrop, there’s a new lead character, Ryunosuke Naruhodo who replaces mainstay Phoenix Wright, and stories full of death, surprise, and all kinds of wonderfully terrible puns.

The game — which is actually a collection of two titles that released in Japan in 2015 and 2017 — is only finally coming out for English-speaking audiences this week. Ahead of launch, I had the chance to ask Hsu a few questions about dealing with regional differences, keeping the story accessible, and the challenges of text versus voice acting.

This interview has been edited and condensed for clarity.

How do you go about making the dialogue feel period-appropriate but also accessible for a modern audience?

Making the text feel period-appropriate while remaining accessible is a real balancing act, for sure. One of the ways we’ve re-created that style of writing is by using older grammar structures for certain characters’ speaking styles, while with others, it might be by using certain words. But even with slightly older words, we only ever used ones that are still in use today; nothing should be so strange or obsolete that it requires players to look up the actual period definition in a dictionary. We also actively avoided words that are too modern or American in origin, so there might be a few places where people might think, “Isn’t there a more idiomatic way of saying this?” But it’s all part of preserving the overall style. In fact, you’d be surprised just how much of our modern style of English was only created in the last 100 years or so.

“We only ever used ones that are still in use today”

We also took care to balance each line’s accessibility with its importance in the larger scheme of the story or a puzzle to be solved. Places where it’s more flavor text than critical puzzle text might feature more flourishes. However, no matter what type it is, people should be able to work out what a word means through context.

At the end of the day, what is accessible will also somewhat depend on each player’s knowledge base and life experience. I do realize, for example, that perhaps some of our younger players might not know off the top of their heads some of the higher-level words that a university student might know through more years of schooling. However, it is my hope that this game will be something people can revisit over and over and enjoy anew each time. Just as someone might see this game in a new light culturally if they come to live or work in Japan or the UK, so too might a player more fully enjoy the text once they have had more exposure to this sort of writing, I feel.

What was it like having to localize a story that involves two very different cultures with Japan and the UK?

Luckily, it wasn’t as hard as you’d think due to a number of factors. The first is that [writer and director Shu Takumi] is very familiar with 19th century London, thanks to his love of classic British mystery novels. He and the original development team did their due diligence and researched everything they needed to know about both Meiji Japan and Victorian London to make the story work. From there, the UK-based English translators and I were able to simply take the Japanese and run with it. Naturally, for the UK-based translators, writing about their own culture was a lot easier than me as an American trying to do the same. That is actually one of the reasons I chose to work with Plus Alpha Translations to begin with, in addition to their history of stellar localizations. For the cross-cultural aspects, figuring out how to present them was a no-brainer for me since I’ve been doing it all my life. Growing up in a very Taiwanese household in America means I have a lot of experience “translating” culturally Asian concepts into something more relatable to someone with a more European background and vice versa.

“I was hesitant to over-explain things”

So more than the locations of Japan and the UK, I think the more difficult parts of this game’s localization lie in the way the historical context compounds the cross-cultural issues. Because the 19th century London setting is something quite literally foreign to Japanese players, there were some great bits of world-building written into the Japanese text to provide cultural explanations. On the other hand, however, there was significantly less information provided about Meiji Japan or it wasn’t explained in as much detail because a lot of it is assumed to be common knowledge. In fact, the opening anime’s very first line in the Japanese version simply says, “A few decades after that history-making opening of the country…” A Japanese audience wouldn’t need to be told this is referring to Japan since they use the word “kaikoku” (開国 / literally “opening the country”), which is more than enough to set up the where and when. But for a Western audience, I felt that this simply wouldn’t be enough information to go on, so we made it very clear that this was Japan and tried to strengthen the impression provided by the Japanese text of just how turbulent the times were in Japanese society through the narration’s writing.

Even still, I was hesitant to over-explain things as it would drag the tempo of the story down, so the translators and I tried to sneak in what we could to hopefully provide enough background for the game to make sense.

It seems like audiences, particularly for a series like this, understand localization much more than in the past. Is this something you’ve noticed? And how, if at all, does that influence your approach?

With art and entertainment, I believe there is a relationship of sorts between creators and their audience through a piece of work. Having come from the world of fanworks and fandom myself, I’ve always been very aware of the many differing opinions on localization in general, and what the prevailing expectations among fans of all stripes are as the years go by. It’s been amazing to watch how trends have changed as professionals and fans alike debate the merits of different localization approaches. The fact that these sorts of discussions are taking place at all is fantastic, and it is definitely not something that happened to this extent when I first started localizing games over 15 years ago.

This greater awareness of localization has led me to trust my audience to think and understand a great deal more about why something might have been changed, or why a certain approach has been taken. Of course, this also means that I am very careful not to betray that trust, so I always make sure every decision I take is necessary and justifiable. But localization is also a creative process, which means not every decision I make will please every player, so it’s also a constant learning process for me.

“I wanted to make the most of this chance”

With The Great Ace Attorney Chronicles being a standalone title that is not connected to the previous games, I wanted to make the most of this chance to make this localization something more in line with the standards of today. In the past, the complete localization philosophy worked extremely well in making foreign-made entertainment accessible to a wider audience. However, thanks in part to the internet and machine translation software such as Google Translate, it’s easier than ever to learn about other languages and cultures and enjoy foreign movies and other forms of entertainment. But that isn’t to say there is no place for complete localizations anymore, either. Just look at all of the regional remakes of TV dramas and movies that are still being produced to great popularity today. Ultimately, I think what the furtherance of understanding surrounding localization has done is it’s opened up a whole range of new avenues — new options and approaches in addition to the existing older approaches that we can consider and use in localizing pieces of entertainment.

How much did you have to worry about localization choices that were made in past games? Did they limit your options in any way?

For this game, it didn’t worry me much at all. While there were a few very small references that were lost, I think the only major issue was what to do about Phoenix Wright and Ryunosuke Naruhodo’s familial relationship. But given how I’ve localized the mainline games to be a more Japanese-influenced version of California, it made it very easy and also made a lot of sense to simply make Ryunosuke into Phoenix’s ancestor and preserve the intended relationship from the Japanese version.

Actually, I suppose there’s also the issue of Prosecutor Auchi and his relation to the Payne brothers, but we’ve had Prosecutor Flynch in Professor Layton vs. Phoenix Wright: Ace Attorney, so I figured that connection’s probably not going to be too “painful” for players to make on their own.

How big is the team? How many people are involved in localizing and translating a game like this?

For the localization of this title, we had a small team of staff here in our Japan branch along with our translators in the UK. In addition, we also had a team of linguistic QA testers who checked and tightened up our text. All in all, it was a long process. But with a story-heavy game like this, too many cooks spoil the broth, as they say, so slow and steady it was.

Does there being voiced elements change things at all? Do you localize differently depending on whether the dialogue is spoken or text?

Just so there’s no misunderstanding, this title is not fully voiced, but there are a number of anime and real-time in-game cutscenes that are fully voiced. In addition, some new gameplay systems have enabled us to employ short voice clips to give our characters more depth.

That said, there is absolutely a difference in the way we write the lines when they’re spoken versus when it is text alone. This is due to what voice acting can convey that text alone cannot. For example, the translators wrote some really funny deadpan lines, but a few of them ended up being so dry that you could mistakenly interpret them to mean something completely different. Had those lines been voiced, I’m sure an actor’s deadpan delivery would have made it unmistakable that they’re meant to be jokes. That’s why the dialogue in a text-based game can sometimes sound a little off when read out loud since it has to be written in a way to properly convey its intended tone without the help of an actor’s delivery.