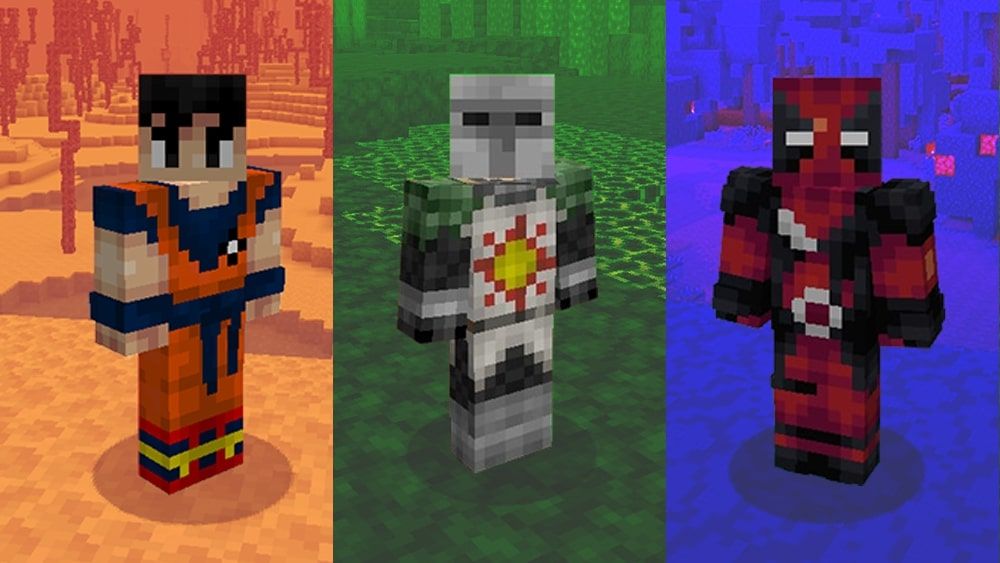 Want to find the best Minecraft skins? These character customisation options let you change your default Steve and Alex into something with a little more pizzazz. Why not dress up as Han Solo? Or Shrek? Or even as your favorite anime character? There are all sorts of cool Minecraft skins that offer a distinctive look, especially if you want to set yourself apart when playing with others.

This list of the best Minecraft skins covers a whole range of customisations. It even shows you a skin editor where you can try making your own. These options should help you get started in finding a fun look for your player, or give you a few ideas to help you craft yourself a personalised look.

While this isn’t technically a Valheim Minecraft skin, this Viking warrior may be the closest you’re going to get if you want to bring a little of Iron Gate’s survival sandbox to the blocky world of Minecraft. The two games have a lot more in common than you might initially think, though thankfully you won’t have to deal with invading trolls in Minecraft.

This Among Us Minecraft skin depicts one of the crew that you might encounter—or play as—during the casual multiplayer game. While you might not be hunting for the imposter in the blocky survival game, you can bring a little of the popular deduction game to your world. And hey, at least you’ll be easy to spot if you’re playing with friends.

With CD Projekt Red still busy with Cyberpunk 2077, it’ll be a while before we see Geralt exploring a new fantastical land, but what about the world of Minecraft? There are plenty of blocky landscapes for you to explore with this Witcher Minecraft skin.

Who didn’t want to be Han Solo when they were growing up? While it’s unlikely that you’re ever going to get your dream job as the captain of the Millennium Falcon, you can at least play as him with this Han Solo Minecraft skin as you go about your blocky adventures. Perhaps you could even tame a wolf as a poor Chewy substitute.

While you’re unlikely to be vaulting across canyons or climbing the sides of precarious mountain passes, Lara Croft seems like an ideal choice for a cool Minecraft skin. You’re technically not going to be exploring tombs but if you’re planning on spending a bit of time mining underground, who better than an archaeologist to help you find those treasures?

Completing DC’s holy trinity is Wonder Woman. There are actually a whole bunch of Wonder Woman skins available, depending on whether you want the classic Lynda Carter look, more modern Gal Gadot style, or something in between from the comics. Lasso of Truth not included.

She might not be an obvious choice when choosing a new skin, but Sylvanas Windrunner might be just what you need to bring some attitude to your blocky world. Plus she’s undead, so that means she can’t die… right? Just remember to keep her away from large trees.

Movie monsters are a bit of a boys club, so this Minecraft skin is here to address the balance. She’s Zombie Girl; a zombie that’s a girl. What else do you need to know? There are loads of zombie-style skins available, but this one with her ragged skinny jeans and flower crown is a little bit more interesting than most.

If anyone can punch trees and rocks forever without stopping to craft a pickaxe it would be Goku. He may only be able to fly in creative mode, but this Saiyan still makes for a great persona. This one’s a simple and straightforward. All the better to recognize that orange jumpsuit.

Speaking of punching, Saitama from One Punch Man is another fun skin choice for Minecraft. No Saitama Minecraft skin is complete without a shiny bald head and iconic blank expression, if only we had his single punch skills in multiplayer servers.

How about Sailor Moon for another classic caped anime hero? Her pigtails may be a bit flatter than in the show but hey, that’s Minecraft for you. The same creator has also made skins for Sailor Mercury and Sailor Mars.

We’re using Jessie and this particular skin as an example, but there are tons of Team Rocket ones available. There’s James, a whole variety of grunts, and even a few of the Pokemon themselves wearing the Team Rocket uniform.

Famous for his supremely chilled painting show, and the phrase ‘happy little trees’, Bob Ross is one of the most wholesome people to have ever existed. If you’ve never watched his shows, you should do so now. Well, after you’ve done some mining dressed as him.

Angry swamp ogre turned internet meme, Shrek is a perfect skin for funny shenanigans. Drop your Shrek avatar into a swampy world, bang on some Smash Mouth, and you’ve got yourself a party.

Alex Raising Steve Above Her Head

Yes, it’s a silly name, but it’s fitting for a pretty silly skin. This one features a torso which has been edited to look like Alex’s head, complete with an actual head which looks like a mini Steve. Therefore, it’s Alex Raising Steve Above Her Head and no other name will fit. It’s official name is ‘skin funny minecraft’, which seems amazingly unimaginative considering how creative this is.

The iconic pupper prince of the internet can now make his appearance in Minecraft. The details are what really make this a great Minecraft skin: Doge‘s arms have little claws on the end and he even has a curl in his tail. Wow. Much dog. Very good.

This famous frog could have easily gone into the horror section, honestly. Kermit‘s dead eyes and gaping mouth are, frankly, more sinister than cute. I would rather face-off against an Enderman than this dude.

We’ve all got Master Chief on the brain as more and more details about Halo Infinite are revealed. While you wait, keep him close to your heart by squeezing into his iconic suit while you play Minecraft.

Half-Life’s silent protagonist, Gordon Freeman, suits Minecraft’s avatar very well. He’s a dude that gets down to business without a hint of a sigh, now if only there were headcrabs in Minecraft…

Praise the sun. You can finally become the most grossly incandescent being in existence; it’s time to become the one true Sun Bro. Not only will this give you the form of Solaire of Astora, but if you slowly descend into madness and get taken over by a parasite, then at least it’ll be in keeping with the character.

That’s right, it’s finally Yoshi’s time in the spotlight. Remember how Mario used to let Yoshi fall to his death just to grab the final flagpole a little bit higher? Well, Mario’s not here to push him around anymore. Despite being quite differently shaped to your avatar, Yoshi‘s look seems to translate pretty well.

Here are some great websites for even more cool Minecraft skins: