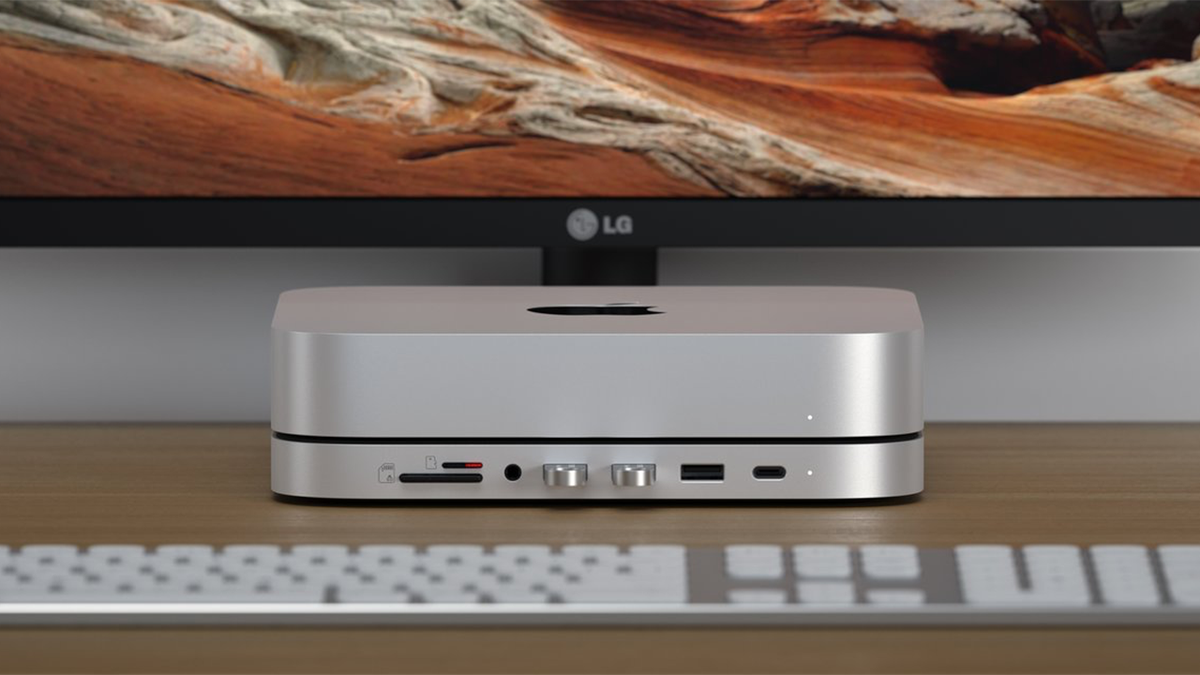 The latest Apple’s Mac mini systems with Apple’s M1 or Intel’s Core i7 processors pack quite a bit of performance and capabilities, but they lack upgradeability, card readers, and ports on the front. As spotted by Notebook Check, Satechi’s new USB Type-C dock not only adds an M.2 slot and additional ports to a Mac Mini, but it also looks like an extension of the PC, not a standalone unit. Yet, there is a catch.

Satechi’s Stand & Hub for Mac mini with SSD Enclosure docking station installs under the Mac Mini and connects to a Thunderbolt/USB-C port of the computer. The dock has an M.2 2280 slot for a SATA SSD, three USB 3.2 Gen 1 Type-A ports, one USB 3.2 Gen 1 Type-C connector, a 3.5-mm audio jack, and a microSD as well as an SD card reader.

The manufacturer has not revealed any of the Stand & Hub’s internal architecture, but we suspect that the device packs a USB-to-SATA bridge to enable the M.2-2280 slot, a USB-to-SD bridge to power card readers, and a USB hub that splits one USB port into four ports and can extract audio signal from USB-C’s DP Alt Mode signal.

Satechi’s Stand & Hub for Mac mini with SSD Enclosure definitely looks good, can add up to 4TB of extra storage, adds two card readers, and brings Mac Mini’s ports to the front. The biggest catch about the unit is that it does not actually use Thunderbolt 3’s 40 Tb/s bandwidth, but relies on a USB Type-C connection, so its aggregate bandwidth is limited to either 5 Gbps or 10 Gbps (Satechi does not disclose whether upstream connection is actually USB 3.2 Gen 1 or Gen 2).

Wasting one of Mac Mini’s two Thunderbolt 3 ports and not getting its full performance is not exactly a very good idea, but if you don’t need the second port, then it is not a problem. Meanwhile, it is unclear whether it is possible to use a USB-C-to-USB-A adapter and connect the dock to a USB-A port instead (of course, the 3.5-mm audio jack will not work this way).

Satechi’s Stand & Hub for Mac mini with SSD Enclosure docking station carries a $99 price tag, while it is not a bargain it does provide extra features while retaining the clean looks of the Mac mini.