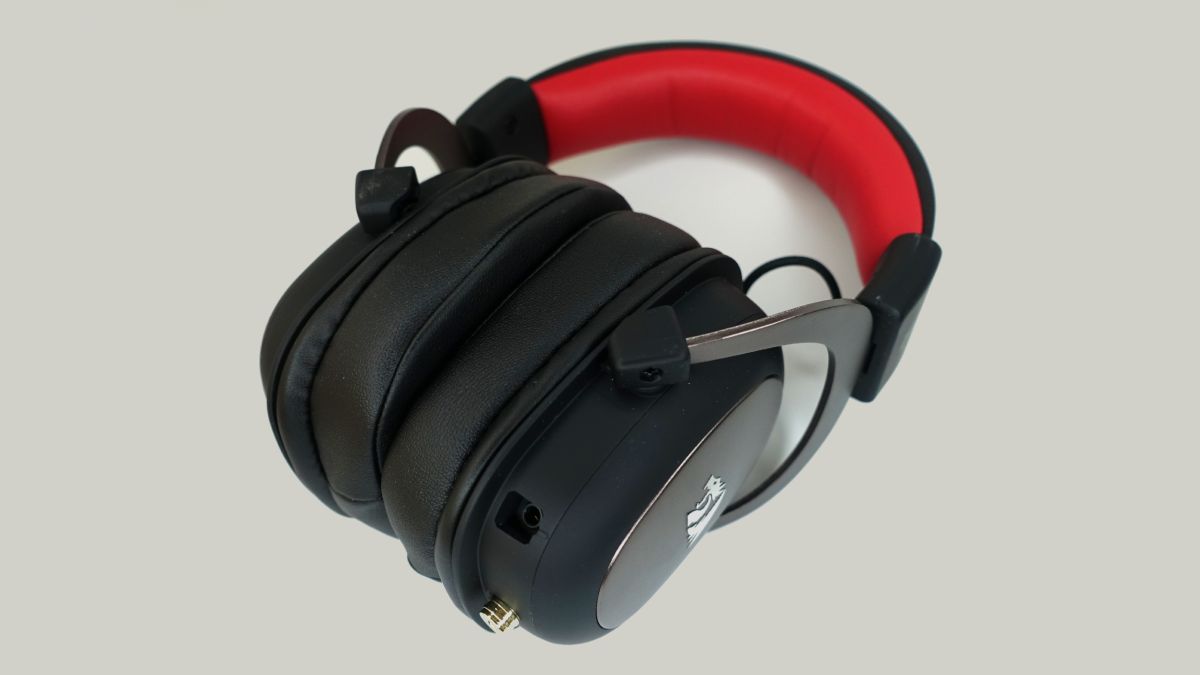 Not everyone can afford the latest Audeze or Sennheiser. Even some of the best gaming headsets from companies like Razer and Logitech are expensive when you add in features like wireless connectivity and premium surround sound. Occasionally, you just want a good, cheap gaming headset that works.

That’s where Redragon comes in. The current Redragon H510 Zeus, a follow-up to the original of the same namesake from 2019, doesn’t have wireless connectivity and has questionable virtual 7.1 surround sound. But the audio quality overall is decent, and it comes in a comfortable design with USB and 3.5mm cables that let it work with pretty much everything. And at the end of the day, you can’t argue with that $50 MSRP.

Image 1 of 4
Image 2 of 4
Image 3 of 4
Image 4 of 4
The Redragon H510 Zeus looks similar to a number of modern gaming headsets. It’s cast mostly in stark, simplistic black with a bit of red to add some contrast. The earcups are black plastic capped off by a metal plate with the Redragon logo on either side. Leatherette over memory foam covers the inside of each earcup, providing some passive sound isolation. We’re entering the summer now, so the leatherette material could be a problem for the sweatier players among us, and there’s no replacement mesh fabric. Still, I didn’t have a problem with the covers, which mostly stayed cool and dry during testing.

The earcups are attached to the headband by two extendable aluminum forks, which allow the cups to rotate slightly inward and outward. The headband itself is black leatherette on top, and the same material is in red on the bottom, covering more memory foam. The headband flexes slightly to cover different head sizes, and I didn’t have a problem with it fitting over my considerable noggin. There’s not a ton of clamping force, and combined with the rather light weight (0.58 pound), the cans always felt comfortable on my head.

There are exposed wires running from the headband to the earcups, which make me concerned about durability. However, the cables didn’t get in the way during testing and seemed sturdy enough. I admit I’m coming to terms with exposed wiring. For what it’s worth, Redragon backs the headset with a 2-year warranty.

The Redragon H510 Zeus 2 is light on additional exterior controls or features and lacks RGB lighting. There’s a keyed 3.5 mm slot for the detachable microphone and a heavy-duty 3.5mm slot for the main cables to hook the headset to your device of choice. The package comes with a 6.8-foot 3.5 mm to USB-A cable, a 4.25-foot 3.5 mm cable and a short 3.5 mm Y-adapter for older PCs. With these cables, you can hook the H510 Zeus to pretty much any device: PC, Xbox One X, Xbox Series X, PlayStation 4, PlayStation 5, Nintendo Switch, tablets, and smartphones.

The 3.5mm to USB-A cable has a set of audio controls — volume up and down, audio mute, and microphone mute. — around 2 feet into the cable’s length. A single LED lets you know which state your microphone is in: red for active and light purple for muted. A benefit of not having any audio controls on the headset is there’s no click or thump in your recordings when you try to mute your mic, so I prefer this.

Given the price tag, I didn’t expect much from the H510 Zeus in terms of audio quality, but the sound coming out of these cans is surprisingly good. The highs and mids are pretty clear, only faltering when it comes to the bass. The deeper booms and thrums, whether you’re gaming or listening to music, just aren’t as present. This can be addressed via Redragon’s software (more on that in the next section) but only to a small degree.

When it came to Assassin’s Creed Valhalla, the H510 Zeus did a great job with every crunch of Eivor’s footfalls, the general noise of civilization in big cities like Jorvik and the understated, sweeping soundtrack of the game.

I also tested the virtual 7.1 surround sound here, bringing us into ‘just okay’ territory. I was able to tell which direction the sound was coming from roughly, but there was some muddiness in the front left/right and back left/right channels. Better headsets with premium surround sound, like Dolby Atmos or THX Spatial, tend to sport noticeably more directionality compared to the H510 Zeus. Of course, they also cost multiple times the Zeus’ price tag.

In Horizon Zero Dawn, the directionality of the virtual surround sound was slightly better, but the bass issue popped up again. I could sit in one place and listen to the grass swaying around Aloy and the errant sounds of machines grazing though. Overall, I was good with the H510 Zeus here.

Again, playing around in the headset’s software improved the directionality issues mildly but not enough to compete with the likes of THX Spatial and other premium options offered by competing gaming cans.

The issue was in listening to the Tallneck walking around Aloy’s location. Once the massive beast gets close enough, there’s a deep rumble to its footfalls, and this lacked oomph on the Redragon headset.

When I tried listening to music, the first thing I loaded up was EXO’s new track, “Don’t Fight the Feeling”. The smooth tones of the group’s considerable vocals came through great, as did the keyboards and synths filling out the track. It’s got a funk bassline throughout, which came across okay on the H510 Zeus. But it doesn’t stand up to some other cans; If you’re used to some other gaming headsets that use excessive bass to paper over other weaknesses elsewhere, the deficit will be noticeable.

Once I got used to that apparent fault, the H510 Zeus generally did rather well with music. There was a great overall soundscape for Bruno Mars and Anderson Paak’s “Leave the Door Open”. The sublime sensual slow jam rolled out wonderfully, and I could hear every tickle Mars made on the piano’s ivories. Redragon puts those 53 mm drivers through their paces.

Overall, the Redragon H510 Zeus stacks up pretty well with some of its competition. The Razer BlackShark V2 X is at a similar price point, and I prefer Razer’s surround sound implementation, but the standard sound of the H510 is fuller and richer to my ears. And the H510 Zeus is USB out of the box, while the Razer needs a separate USB DAC to utilize surround sound at all. Point to Redragon.

Also, the sound isolation is pretty great here. With the H510 on my head and no audio playing, outside sound is muffled. Once I turned on any audio though, outside noise mostly went away. I had my partner talk to me directly while I had Amazon Music on and couldn’t hear her.

There’s also very little sound leakage for others in the room, so they won’t hear you fragging in Doom Eternal or jamming to The Weeknd’s “After Hours,” well, after hours.

Microphone on the Redragon H510 Zeus 2

The Redragon H510 Zeus 2 has a detachable boom arm microphone. It’s an omnidirectional model with more noise cancellation than some competitors. Redragon specs the mic with a frequency response range of 20 Hz – 20 kHz and a sensitivity of -42dB, which is pretty standard.

In testing, it picked up my voice well. The problem is in the volume, not the clarity; even with the mic volume kicked up and the “microphone boost” option on in the headset’s software, volume still sounded very low overall.

In terms of noise cancellation, the H510’s mic does an okay job. It’s an omnidirectional microphone, so it’ll pick up everything. Given the summer heat, I have my air conditioning on. The mic slightly picked up the slight hum of my AC, and background noise like my fairly heavy-handed style of typing and breathing did come through in the recording. It’ll get you through a Zoom meeting, but I wish there was a way to fix the volume issue.

In terms of presentation, the Redragon’s software lags far behind the software suites from Razer, Logitech and SteelSeries. The Redragon Audio Center looks to be a fairly old program and an ugly one to boot. It’s also somewhat unintuitive, as the options within “Speakers” and “Mic” are accessed by a right-click menu, rather than simply clicking on them.

Despite that, the app surprises somewhat by having a solid host of options. The Speaker settings include volume control, full equalizer, and speaker placement map for the virtual surround sound. There’s even a pitch shifting option and some scant environmental audio effects, like changing the size and type of your virtual room for the surround sound. The disappointing bass and poor directionality of the surround sound can also be somewhat blunted in the software.

The Mic options include a volume for the mic itself and monitoring, so you can hear what you sound like while you’re recording. There’s also the aforementioned microphone boost option, and a few useless “Magic Voice” voice-changing toggles. Sadly, nothing I did made the mic audio louder.

The Redragon Audio Center falters in look and installation, but I was impressed to find the software had the options it did. If Redragon cleaned things up and added some suite-wide profiles and app detection, this could be something sweet.

Does the Redragon H510 Zeus stumble and stagger in some areas? Of course. If price is no object, look elsewhere. The microphone volume is too low, the noise cancellation is on the weaker side, the surround sound isn’t the greatest and the bass could use a little more power.

But for $50, (and we’ve seen it go for even cheaper), you get a well-constructed headset with a pretty good overall soundscape that works on nearly every device.

The H510 Zeus doesn’t overpromise. It does what it says on the tin and does it pretty well in the final estimation. With an improved software suite, it’s probably one of my favorite headsets in this price range. It walks and feels like a Hyper Cloud II, for around $30 less. Sometimes, value is the focus.