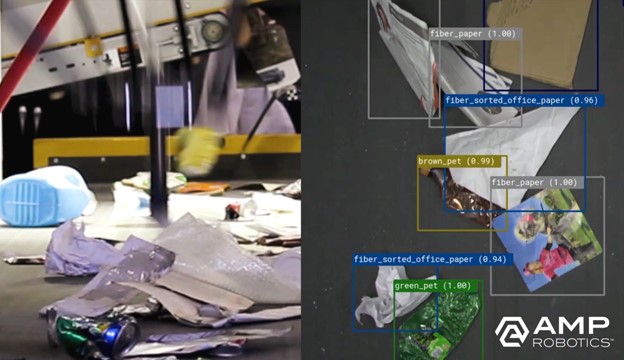 Matanya Horowitz smelled a problem in 2014.

Fresh out of CalTech with a Ph.D., he saw that recycling centers lacked robotics and computer vision to pick through heaps of garbage-contaminated recyclables.

Horowitz founded AMP Robotics that year to harness AI run on NVIDIA GPUs to turn to sort out the trash into cash.

It’s a ripe opportunity. People worldwide produce 2 billion tons of waste a year, with 37 percent going to landfills, according to the World Bank.

“Sorting by hand on conveyor belts is dirty and dangerous, and the whole place smells like rotting food. People in the recycling industry told me that robots were absolutely needed,” said Horowitz, the company’s CEO.

His startup, which has 130 employees, can double sorting output and increase purity for bales of materials. It can also sort municipal waste, electronic waste, and construction and demolition materials.

AMP has collected one of the world’s largest labeled datasets of images for recyclables with its Neuron AI platform.

That’s used in training its image recognition models, run on NVIDIA V100 Tensor Core GPUs. Training with such a massive dataset from packaging types from all over the world, different lighting conditions, and many unique recycling businesses has provided AMP as much as 99 percent accuracy on inference.

A National Science Foundation grant in 2015 helped Horowitz hatch a small team to jump on the problem early.

AMP, based outside Boulder, Colo., has scooped up business with more than 40 recyclers. Along the way, the company has attracted $75 million in funding as it’s become the rising star of AI for recycling. It recently landed on the Forbes AI 50, a list of the top AI companies to watch.

The company is a member of NVIDIA Inception, a virtual accelerator program that helps startups in AI and data science get to market faster. Direct connections to NVIDIA and training credits provided from the Inception program helped accelerate experimentation and innovation for AMP, said Horowitz.

Recyclers can’t keep up with sorting. Tighter restrictions against contamination in recycled materials sent to China have made combing through it more work, creating more landfills. Worse yet for recyclers, these new added sorting costs come amid a tight labor market.

U.S. exports of plastic scraps to China have slid nearly 90 percent, according to the Institute of Scrap Recycling Industries. Recycling processors worldwide are struggling to better sort trash to produce cleaner recyclables and stay in business.

The problem now for U.S. recyclers is that the costs of sorting domestically — if labor is even available — are close to the value of the materials on the commodities markets, said Horowitz.

AMP has changed the economics of recyclers. Its image classification models are deployed on NVIDIA GPUs to enable robot arms with suction cups to zip about conveyor belts, picking out the trash to help.

The computer vision system for the robot arms can recognize an ever-expanding number of items. It can swiftly sort everything from Starbucks cups, PET plastic bottles, and clamshell containers, to office paper, aluminum cans, hazards, and many more items. The system identifies dozens of categories simultaneously.

The company’s millions of labeled images drive its highly accurate image classification models, capable of identifying thousands of recyclables in milliseconds, so its robotic arms can sweep into action. AMP Robotics relies on NVIDIA GeForce RTX or V100 GPUs, depending on the recycling center, to run this split-second inference.

AMP uses the end-to-end NVIDIA workflow to train its Neuron AI platform. The system can train on over a billion types of garbage and recyclables and run on the network in real-time. NVIDIA TensorRT enables a doubling in speed-up on inference and a 50 percent reduction in latency.

Because AMP keeps a fixed amount of computing resources for latency and inference, anything the company can do to accelerate existing networks allows the company to reinvest that into larger networks that unlock more performance.

The startup now has more than 120 recycling robots deployed worldwide. Its customers span the U.S., Spain, Japan, Canada, and other countries that are soon to launch.

Another capability AMP Robotics provides is data collection and analytics. This way recyclers can keep track in real-time of how much revenue-generating materials are being collected and how much is being sent to landfills. Previously this was nearly impossible to track, Horowitz said.

AMP Robotics NVIDIA GPU-driven systems enable customers to bring costs down as well as sort plastics into different categories to achieve better returns. For instance, it can sort out HDPE color plastics, which are more valuable, from other plastics.

Also, the neural Recyclers network can learn new materials over time, offering a wider range of sorting capabilities and new opportunities for revenue.

“You can separate out by color, brand, or form factor, and when you start to do this, you can make the material worth a lot more,” he said.

Learn more about AMP Robotics from its GTC 2021 presentation.