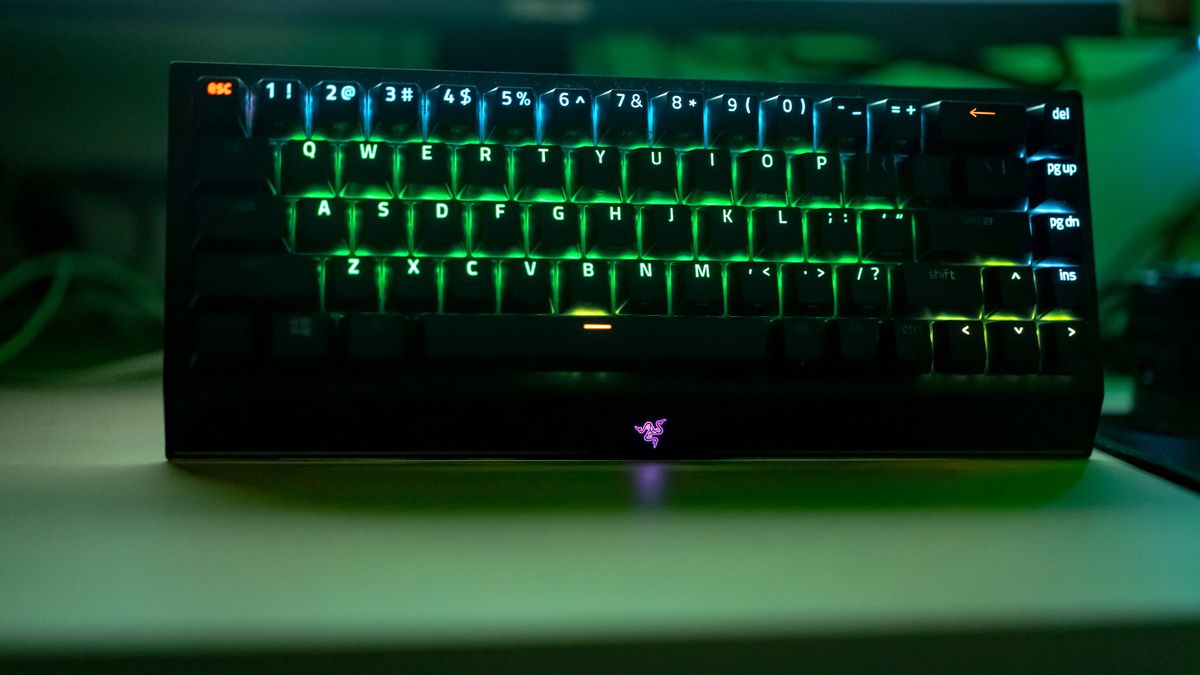 Razer just announced the brand new BlackWidow V3 Mini HyperSpeed, a 65% version of the BlackWidow V3 Pro that launched last year. As a 65% keyboard, the V3 Mini drops the entire right-hand block of keys for a much smaller footprint. Unlike the 60% Huntsman Mini, the V3 Mini includes the arrow keys and four navigation keys that can also be used as macro keys.

Like its bigger brother, the V3 Mini gives you three ways to connect—Razer HyperSpeed 2.4Ghz wireless, Bluetooth, and USB cable. Add in 200 hours battery life and blazing-fast Razer Yellow Mechanical switches and you’ve got yourself a dandy little package. But, it will cost you a whopping $180/ £180.

I was just as shocked as you probably are with that price. I only found out the final pricing days after I’d unboxed the V3 Mini and had been using it. It’s a lot, for sure.

I’d been enraptured by how small the V3 Mini was compared to every other chunky Razer keyboard I’ve ever tested. It’s still a chunky little thing with a rather tall aluminium deck that really begs for a wrist wrest. Despite that, it’s surprisingly light leading me to initially assume it was made of plastic. But nay, it’s a solid aluminium block that looks like it can take a ton of punishment, which is good as I foresee many people throwing this in a laptop backpack thanks to how compact it is.

Now you might be wondering why anyone would want a 65% keyboard over a 60% board? Simple: arrow keys. They may not be as important for gaming as they are for productivity tasks, but they’re still handy to have. However, squishing in arrow and home keys does present some muscle memory challenges as you need to relearn the position of your right Shift, Ctrl, and Backspace keys. Days later, I still need to look down at the board in order to use the arrow keys correctly.

The layout initially caused plenty of typing errors but a few days in, my fingers have learned the position of everything well enough and I’m making far fewer errors. And the Razer Yellow mechanical switches were also another learning curve. These linear switches are wicked fast with a very short actuation point that is very weird for someone like me who prefers longer travel and feedback of tactile switches.

The Yellows are incredibly fast and smooth—requiring the lightest of touches to actuate. I often activated adjoining keys accidentally. Response in games is fantastic but just be aware of how easy it is to activate the wrong thing due to their sensitivity. However, once you get used to them, you can bang out words at a brisk rate with minimal errors.

Unlike the Razer Greens, these improved Yellows have silicon sound dampeners that make them much quieter to use. This means you can use the V3 Mini in public or shared spaces without fear of annoying everyone around you. The keycaps also have an improved Doubleshot moulding process that makes them thicker and more durable. You can replace them with aftermarket ones except for the left modifier keys that are thinner than standard.

The keys are all backlit of course with Razer Chroma lighting which has freakish levels of customization in the Chroma Studio app. But be warned; running the V3 Mini with full lighting effects and HyperSpeed connection will drain the battery reserves absurdly quickly. We’re talking about 20hours or so. Turn off the lights though and use Bluetooth and the V3 will last you 200 hours.

I can’t complain about battery life since the V3 Mini also works with a USB cable connection. This has the added benefit of a completely lag-free response while the V3 also trickle charges back up. Not that input lag is a problem when the V3 Mini is using a Razer HyperSpeed 2.4Ghz connection, which is a well-proven tech at this point. But the coolest thing about HyperSpeed on the V3 Mini is the new multiple device support that lets you use different Razer gear with the one dongle.

As a frequent laptop user, I can appreciate freeing up one of the precious USB ports that this promises. I should point out that this works with a limited number of Razer devices right now—the new Orochi V2 being one of them. However, every new Razer accessory should support this tech.

For my first 65% keyboard, the BlackWidow V3 Mini HyperSpeed is impressive. The compact form factor makes for clearer desk spaces and it’s great for portability too. The layout requires a few days to adjust to and I miss having dedicated media and function keys sometimes. But if you primarily use your board for gaming, it’s fantastic; assuming you can stomach the $180 price tag.