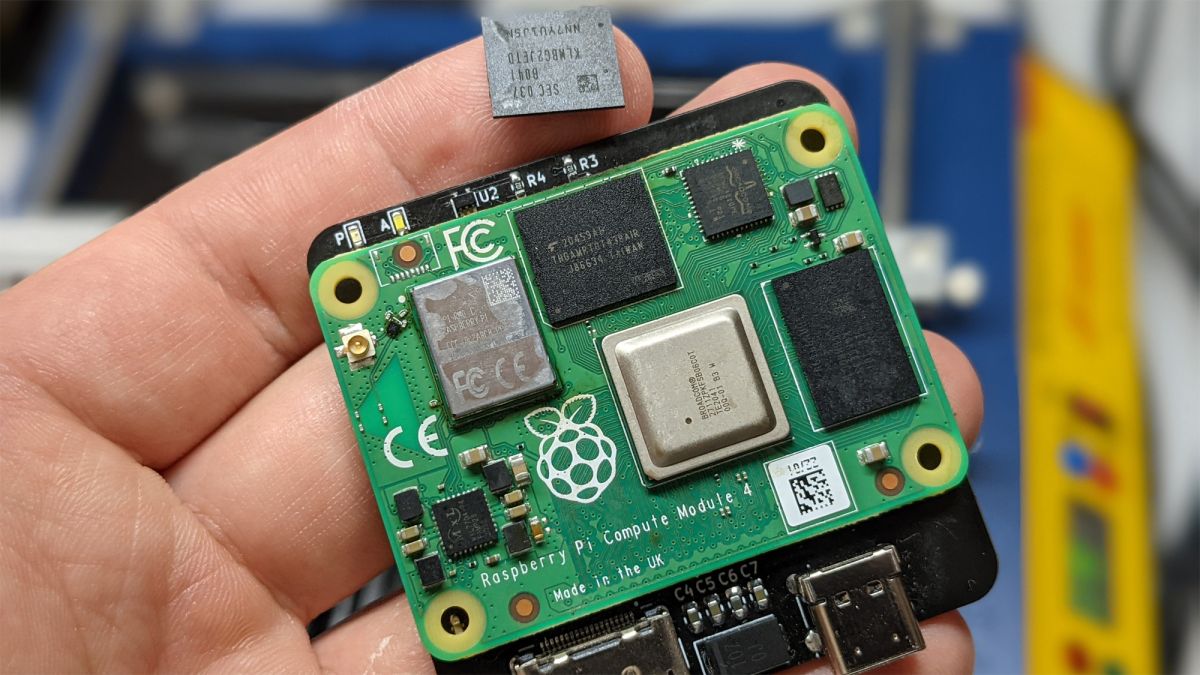 The regular Raspberry Pi 4 doesn’t come with any onboard storage, but you can put a high-capacity microSD card inside or even boot your Raspberry Pi from a USB SSD. If you get a Raspberry Pi Compute Module 4, you can opt for 8, 16 or 32GB of onboard eMMC storage, but what if you need more?

Raspberry Pi Fan Ivan Kuleshov came up with a unique and compelling answer. To get more onboard storage, the systems engineer installed a 128GB eMMC module onto his Raspberry Pi CM4.

“I did it,” Kuleshov tweeted earlier today, “Now I have Raspberry Pi CM4 with 128G[B] eMMC Onboard.”

Kuleshov didn’t say a lot about his method for adding the extra memory, apart from sharing some images on Twitter of his process, with the CM4 under a microscope. There’s no image of a soldering iron but it appears that he removed the previous eMMC memory with a heat gun and soldered on the new one.

The Toshiba 128GB eMMC module Kuleshov used offered impressive speeds. In his tweet, he shows it providing sequential reads of 80 MBps and writes of 70 MBps. Even the best Raspberry Pi microSD cards get between 30 and 40 MBps.

Kuleshov didn’t name the exact model of eMMC storage he used. But after looking at Toshiba’s eMMC product list, it seems that Kuleshov likely used the “THGBMHT0C8LBAIG,” a 128GB model that would fit the bill.

Toshiba’s product page for the eMMC NAND flash memory device states that it is a “reliable storage solution based on high-quality NAND memory and an optimized controller.”

Kuleshov didn’t mention what he might use the 128GB of on-board storage for, but one could potentially use it for a media server, a gaming machine for a  or holding a lot of machine learning data. Of course, with the right carrier board, you can easily add high-speed storage to your CM4 without this kind of hardware hacking. But what would the fun of that be?