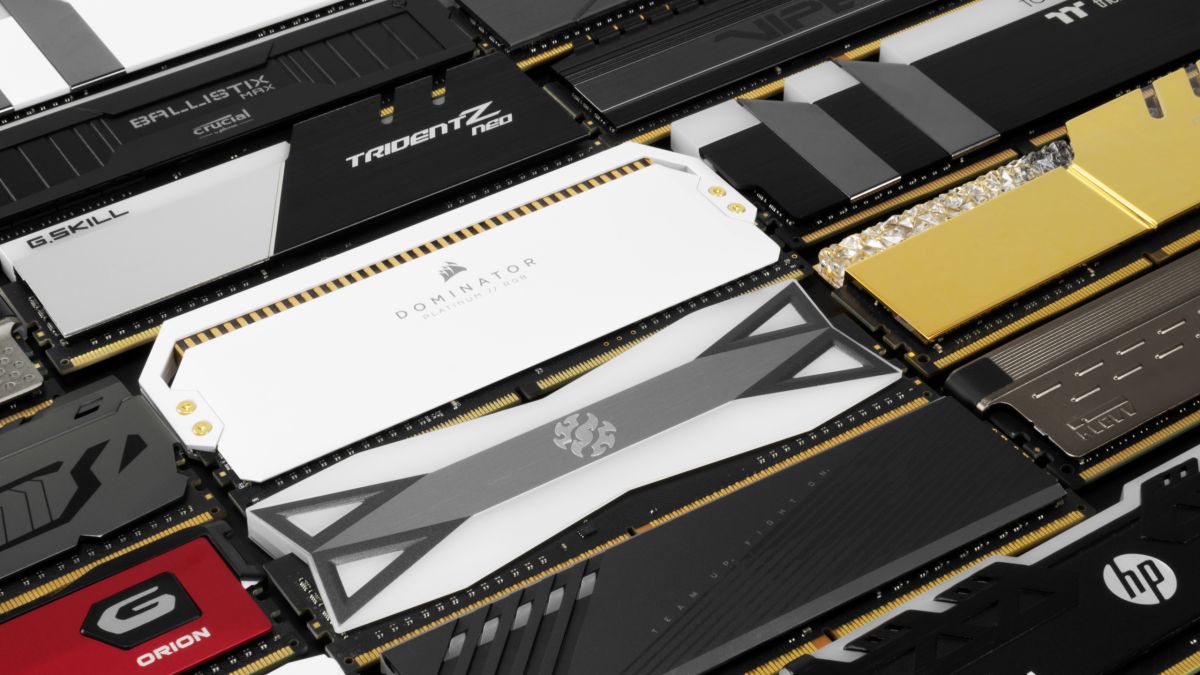 
RAM (Random Access Memory) is often overlooked, but our RAM benchmark hierarchy will help you find the fastest memory kit for your system. Memory is one of the most important pieces of hardware of any system. The right or the wrong memory kit can have a big impact on your system’s overall performance in gaming, productivity, and (if you don’t have enough of it) overall sluggishness. So it’s always best to reference our Best RAM list to find the best deals on memory.

Companies regularly release new memory kits with varying speeds, timings, capacities, and ranks, making the process of sifting through seemingly endless models surprisingly time-consuming. Our RAM benchmark hierarchy aims to provide you with a simple database that ranks the best memory kits on the market based on pure performance.

To keep the ranking as objective as possible, we use a geometric mean of our memory benchmarking results and discard the intangibles, like aesthetics and overclocking headroom. (We’ve got those details in the individual RAM reviews.) Furthermore, we suspect that many of you would value performance over anything else. However, the geometric means don’t always tell the whole story: If you’re looking for performance in a specific workload or for gaming, we recommend taking a look at the full review of the memory kit you have in mind.

The score is a result of the geometric mean from our RAM benchmark suite that includes scripted and real-world tests for Microsoft Office, Adobe Photoshop, Adobe Premiere, Cinebench R20, Corona benchmark, 7-Zip compression and decompression, Handbrake x264 and x265 conversion, LuxMark, and Y-Cruncher.

For the sake of simplicity, we’ve separated the memory kits into different categories according to their densities. We ranked the memory kits for each capacity from best to worst for both Intel and AMD systems.

The score on our hierarchy may differ slightly from the geometric mean in the individual review. The discrepancy is because we strive to provide you with results on the most recent and relevant Intel and AMD platforms. Keeping the metrics in the table as up-to-date as possible involves retesting every single memory kit on the list when there’s been a substantial change in either of our test systems, such as a new processor, motherboard, or graphics card (or even new firmware revisions), just to name a few.

Memory pricing is very volatile. We’ve restrained ourselves from providing a price-to-performance value since it would only capture the pricing for one static moment in time, and memory pricing fluctuates far too much for that. That means that while you can see up-to-date pricing listed in each table below, the performance measurements don’t take that pricing into account.

If you’re split between two particular kits, you can always evaluate your options on your own by dividing the real-time pricing by the geometric mean. Obviously, you’ll be looking for low values, as a lower number represents a better bang for your buck.

Once upon a time, the memory controller resided on the motherboard itself. As processors and motherboards evolved, chipmakers eventually moved the memory controller onto the chips. Therefore, Intel and AMD specify the official supported memory frequency that’s supported on each generation of their processors. Unless you have a very good sample, drifting far away from the supported frequency will require manual tweaking to get the memory to play nice with your processor. For the best plug-n-play experience, you should pick up a memory kit that doesn’t surpass the supported frequency.

There are two important things to take into account if you want to run memory that’s faster than the official specification for your processor. For starters, the quality of your processor’s IMC (integrated memory controller) determines if it can handle high-speed memory. Since no two processors are equal and you can’t judge a chip’s IMC until you test it, it’s down to the silicon lottery.

Secondly, you need to ensure that the motherboard supports the frequency of the memory kit that you have your eyes on. A quick trip to your motherboard’s user manual or product page should give you the information that you need. Furthermore, the motherboard’s memory QVL (Qualified Vendors List) is very helpful as it’ll tell you whether a specific memory kit has been tested and validated on the motherboard. But remember that your chip’s IMC still plays a bigger role.

In case you’re unsure of the memory frequency that your processor supports, we’ve provided the different standards for the last few generations of AMD and Intel processors.

AMD’s existing Zen 2 and Zen 3 processors arrive with native support for DDR4-3200 memory modules right out of the box. As you are well aware, Ryzen 3000 puts up the best performance when the Infinity Fabric clock (FCLK) is in sync with the memory clock (MCLK) in a 1:1 ratio. Therefore, it’s important to bear in mind that asynchronous operation introduces a latency penalty. The majority of Ryzen 3000 processors can operate with a FCLK up to 1,800 MHz or DDR4-3600.

Ryzen 5000 follows the same guidelines in regards to the FCLK and MCLK. However, the really good samples can support a 2,000 MHz FCLK, which opens the door to leverage DDR4-4000 memory without any performance hit. For more information on the impact of memory frequency, capacity and ranks on Ryzen 5000’s performance, see our latest Ryzen 5000 RAM guide.

Intel has launched its new 11th Generation Rocket Lake processors that sport Cypress Cove cores and Xe graphics. The 14nm processors debut with new microarchitectural improvements, bringing IPC gains up to 19%. With Rocket Lake, Intel has bumped the official supported memory frequency up to DDR4-3200, which is now on equal grounds as AMD’s Zen 2 and newer processors.

For the first time, Intel has enabled memory overclocking on a non-Z motherboard. Both H570 and B560 motherboards will be able to run memory that’s faster than Rocket Lake’s default baseline.

Our current Intel test platform is based of an Intel Core i9-10900K processor. The octa-core Comet Lake-S flagship chip resides on the Asus ROG Maximus XII Apex motherboard, which employs the 0901 firmware. On the other side, our AMD testbed includes the AMD Ryzen 5 3600 processor and the ASRock B550 Taichi that’s running on the 1.30 firmware. An MSI GeForce RTX 2080 Ti Gaming Trio graphics card handles the graphical duties on both test platforms.