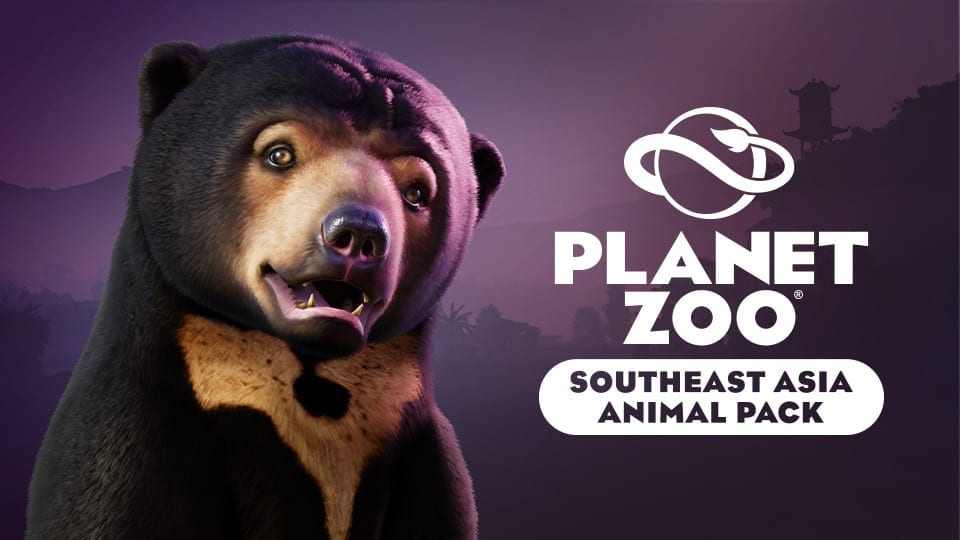 Planet Zoo never fails when it comes to introducing the best and most exciting animals to the ever-expanding game. The latest Planet Zoo pack is one fans won’t want to miss, as we’ll be saying hello to a whole host of brand new creatures with the Southeast Asia Animal Pack! Let’s have a look at some of the new faces joining Planet Zoo.

Planet Zoo lovers have been calling out for the clouded leopard for a long time now, and finally they’re here! The clouded leopard is sure to be a show-stopper in your zoo, but make sure you’re keeping yours happy with a dense forest-like enclosure – that’s where they really thrive!

Clouded leopards are known as solitary animals, with some even describing them as “rare and secretive.” Hopefully your clouded leopard won’t be hiding any secrets from your guests though, as this is definitely going to be one popular wild cat!

The sun bear is the smallest of the bear family, and it’s definitely one of most adorable! With their notably stocky bodies, huge paws and excessively long tongues, these bears could very well be the one of the cutest animals in your zoo.

The sun bear is a fantastic climber, and you’ll often see them sunbathing or (or napping!) high above the ground. Make sure you’ve got the right home for your sun bears; though they’re usually shy and reserved, they can get upset if provoked!

Seeing the sun bear in Planet Zoo is definitely going to bring a smile to your face – and to your guests’ faces too!

The proboscis monkey won’t be offended if you use its other name of “long-nosed monkey” – it’s actually a fair description! These monkeys are known for their long faces, red-brown bodies and lengthy tails.

The proboscis monkey usually lives with others of its kind, but they have been known to exist solo (though you’re likely to only see this with males).

Male proboscis monkeys aren’t just recognised by their distinct faces, but also by their voices. Males will communicate in honks, which definitely makes them a perfect – and hilarious – addition to your zoo!

If you haven’t heard of the binturong, you might know them by their other name of “bearcat.” These short and stubby animals are coated in thick black fur, and are active during both the day and night.

Binturongs rely on their tails, using them not only for balance and for clinging to tree branches, but also to communicate with others of their kind. Though shy, the binturong can become aggressive, so make sure your park guests are keeping a safe distance!

Sadly, the binturong population in the real world is declining.

Also known as the Asian tapir, the Malayan tapir is definitely an eye-catching animal!

These black and white beauties might make your zoo a little more monochromatic, but you can certainly add some flair to their tropical enclosure. The Malayan tapir is known for its terrible eyesight, but don’t worry about getting glasses for these animals – their sense of smell and hearing are heightened!

The Malayan tapir are mostly solitary animals, and they’re also herbivores. Keep yours happy in your zoo with plenty of vegetation!

While the Ussuri dhole might look like just another wolf dog, these animals are easily distinguishable thanks to their red fur.

Their natural habitats can range from grasslands and forests to alpine tundra, making them pretty versatile when it comes to making them a home in your zoo!

Despite appearances, the Ussuri dhole is no mere dog. They’ve been known to devour deer and wild boar, with some even favouring elephant calves!

These pig-like animals are native to Sulawesi, and definitely won’t be overlooked in your zoo thanks to their massive tusks!

Despite weighing up to a whopping 220lbs and being more than capable of surviving natural dangers, the North Sulawesi babirusa is a species under threat due to illegal hunting. While they’re now protected in their home of Indonesia, their tusks still make them desirable to hunters.

The North Sulawesi babirusa favours the underbrush of tropical forests, but will also be right at home beside a river or lake!

Your guests might be fooled into missing the Giant Malaysian Leaf insect, simply because they’re so good at hiding!

These insects are hard to spot due to them looking very much like – you guessed it – a leaf!

While looking for them might have some zoo guests scratching their heads in puzzlement, the Giant Leaf insects’ appearance actually protects them from predators in the wild.

Giant Leaf insects have six legs and a short antennae. These creatures are definitely unique, and they’ll make a very curious addition to your zoo, especially as they’re this pack’s exhibit animal!

It’s not just eight new creatures included with the Planet Zoo Southeast Asia Animal Pack, but a whole new timed scenario too! You’ll be tasked with transforming a struggling zoo into a slice of paradise. Thankfully, it just so happens to be based in Perak, Malaysia, which means your zoo is in a tropical rainforest biome!

Make use of Planet Zoo’s construction and landscaping tools and breathe new life into the zoo to beat this brand new timed scenario. Are you up to the challenge?

The fun doesn’t end with the Southeast Asia pack though, as the game is also getting a new update which is free for all players! The fresh update will add new content to your Planet Zoo game, including multiple zoo entrances, video billboards, new scenario rewards, customisable water colour and volume, plus the ability to save franchise zoos as sandboxes! Players will also be able to enjoy a new timed scenario called Bernie’s First Steps. Here you’ll be tasked with transforming an early version of Goodwin House into a thriving country park.

With eight brand new animals and a whole new scenario to enjoy, the Planet Zoo Southeast Asia Animal Pack is a must-have for Planet Zoo fans!

Part of a paid partnership between GameByte and Frontier Developments.