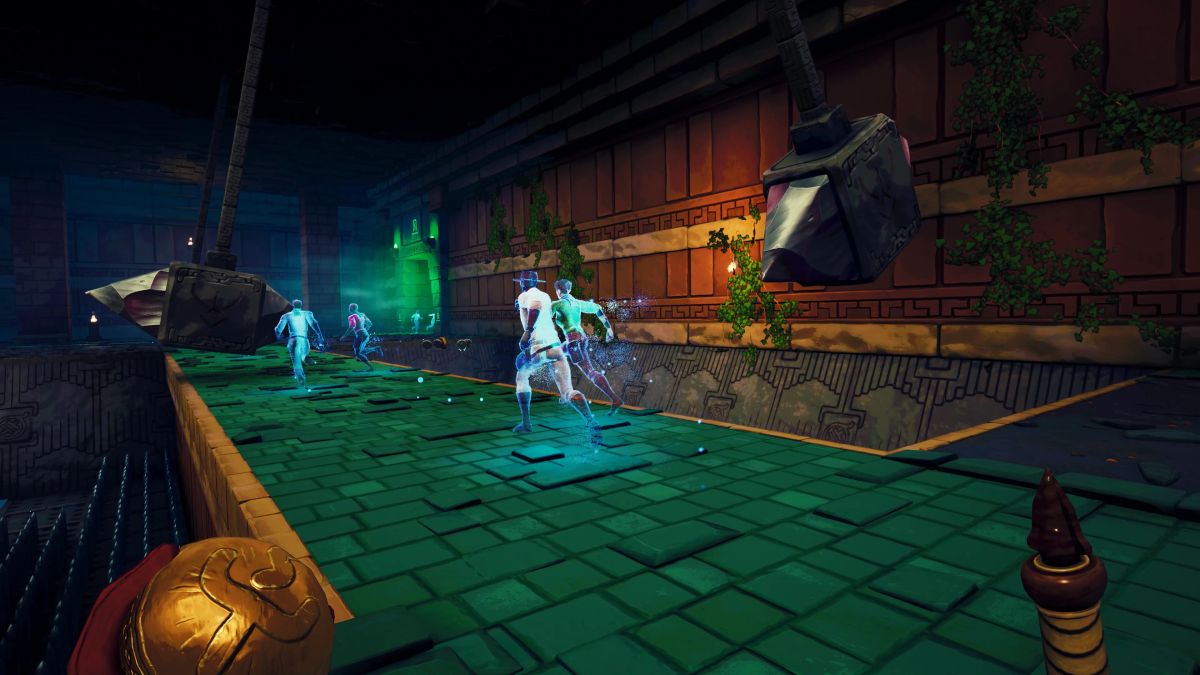 Phantom Abyss is an Indiana Jones-style platformer about escaping an underground prison, and dying a lot along the way. First shown at this year’s Devolver Digital E3 showcase, your freedom is in the hands of a god who demands sacred relics. To get your mitts on these ancient items, you’ll need to whip through four floors of a procedurally generated temple filled with deadly devices. Falling rocks, giant swinging hammers, hidden spikes, moving stone floors, bottomless chasms—all the classic temple booby traps are here and ready to take you out.

During each run, you’ll be joined by the ghosts of up to 20 other players who have all previously died in the temple you’re attempting to complete. Watching the successes and failures of each fallen phantom is key to getting deeper into the temple, and if you also meet a gruesome end you leave your own phantom in that same temple.

The ghost system is what makes Phantom Abyss super fun. Watching how other players approach each trap lets you see which route works best, and which will leave you in a bloody mess. Seeing previous players get obliterated by increasingly lethal traps is tense, but it’s also exciting to learn from their footwork. It’s good to know that all my embarrassing blunders and the times I’ve been sliced, diced, crushed, bludgeoned, and impaled will hopefully help someone else get that little bit further.

As you complete each of the temple’s floors, things begin to get more frenzied. Each run not only has traps but a guardian who is pretty pissed off that you’re scuttling around their temple. Sidestepping timed spikes is easy enough, but not when you have a giant eyeball firing red hot lasers at you.

Phantom Abyss gives you three lives per run, so there’s room for error, but there’s something about wanting to elegantly breeze through a deadly room that makes you take more risks. Sure, I could stop and wait for the incredibly large hammer to swing out of the way, but I could also slide along the floor underneath it. It’s risky, but wouldn’t it look cool as hell?

Phantom Abyss’s fluid controls get you into that cocky, daredevil mindset. Dodging and diving through the world’s most lethal obstacle course has its own thrills, but the addition of a whip takes the action to another level. It essentially acts like a grappling hook, letting you climb up high ledges, leap over big gaps, and getting you out of sticky situations. The number of times I’ve fallen into a chasm only to grab a ledge with my whip and hoist myself back up is too many to count. It’s incredibly easy to use and gives your character a certain amount of agility that never becomes tiresome or interrupts your flow.

There are several whips to choose from before each treacherous trip, each one with a fancy ability attached to it. There’s one that gives you the ability to double jump or another that grants you two extra heart containers. They certainly help you navigate the temple’s depths, but if you die down there, your whip is lost too. That is, until a player completes the temple, then everyone gets their lost loot back. If you’re skilled enough to survive each floor and grab the relic at the end, that dungeon is sealed off forever.

It’s not available in Early Access yet, but Team WIBY want players to be able to share temple codes with friends so they can attempt the same run. Watching the phantoms of friends as they perish from various fatal booby traps sounds like my kind of fun.

The Phantom Abyss Steam page says that the game will be in Early Access for at least a year, and Team WIBY will be working on adding new features and content throughout that time. I’m looking forward to these updates, as some of the temple layouts are a little repetitive. But there’s just enough variety to keep it from getting tedious, and having the whip always makes each run more interesting. Phantom Abyss is the whip-based parkour platformer we’ve all been waiting years for so Bethesda had better be taking notes for its upcoming Indiana Jones game, that’s for sure.