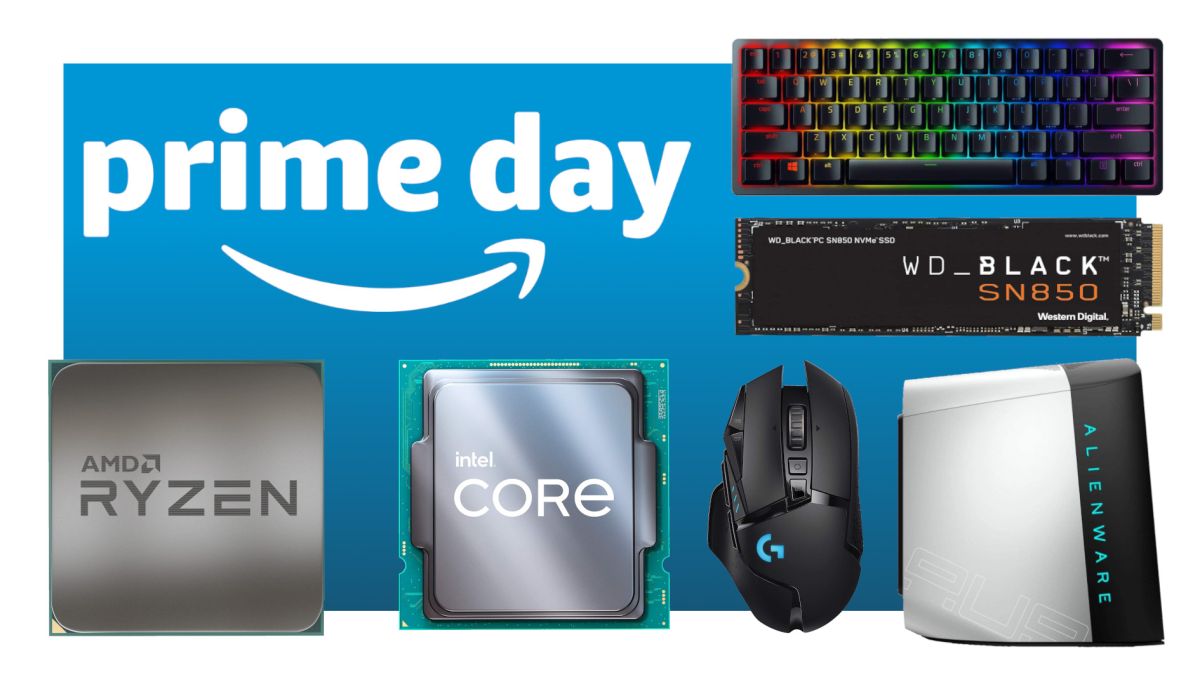 Amazon Prime day is happening a lot earlier than last year, settling back down to its traditional June spot as opposed to the Black Friday aperitif it was in 2020. It’s still running across two days though, with Monday June 21 and Tuesday June 22 being this year’s Amazon Prime Days.

As usual, we’ll been running the rule over what’s worth your time and money when it comes to Amazon Prime Day PC deals, but it’s not just going to be Bezos’s besties shipping the bargains. There will be a host of other retailers looking to cash in on the Prime-focused sales event.

But if you are after the specific Amazon deals then you are going to need to get yourself Prime membership to fully take advantage of the deep discounts we’re expecting this year.

So what is going to get its pricing slashed in the June event? With a worldwide component shortage you’d be forgiven for thinking that Amazon Prime Day will represent slim pickings for PC gamers, but while there will definitely not be any graphics cards on offer this year (are there ever?), we’re still expecting some great offers to surface.

And there are already a few early deals on Amazon devices and services out there to whet our appetites, and you can expect Amazon’s own devices to get some serious discounts over the days leading up to Prime Day.

2x Echo Dot (4th Gen) | Code: PDDOT2PK | $49.98 at Amazon (save $40)
The wee Echo Dot has got a now-traditional 2-pack discount for Prime members again this year. With a $40 discount at the checkout, with the PDDOT2PK code you’re almost getting two for the price of one. In fact, you actually would have been before the current $5 discount for everyone was added.

2x Echo (4th Gen) | Code: ECHOPRIME | $119.98 at Amazon (save $32)
The current Echo discount makes kitting out your home with a pair of Echo smart speakers mighty tempting, but with Prime membership and the ECHOPRIME checkout code you might as well buy two…View Deal

Audible | Save 53% on first 4 months | $6.95 per month at Amazon
Get your Dan Carlin and true-crime audio fix with a bargain price on Audible Premium Plus. That gets you an audiobook of your very own each month as well as a host of other content that’s freely available with a subscription.View Deal

Amazon Prime Video | Save up to 50% on shows and movies
Let’s face it, you’re probably just getting your free trial of Amazon Prime for deals and free shipping around Prime Day, but don’t forget you have access to the video side too. Sure, you still have to pay for a bunch, but with up to 50% off in the run up to Prime Day that’s not a bad deal.View Deal

With a bunch of new laptops coming from AMD and Intel in the coming months, and with the current generation only really hitting the shops now, there will be a lot of laptops around that are ripe for a good discount.

Amazon will be a good place to keep an eye out for gaming laptop deals from the usual suspects, such as Asus and Acer, but it will also be worth making sure to track what Razer and Alienware are doing on their own stores.

With the component shortage being what it is, your best chance of getting the latest GPU and CPU hardware in a gaming rig might just come from a new gaming laptop. They seem to be more readily available than even some pre-built PCs today, so there’s a good chance of getting one shipped relatively quickly.

If you want a new graphics card, and a beefy desktop one, not a weaker mobile version, then you’re going to need to grab yourself a pre-built gaming PC. System builders have a direct line to the much sought after GPU commodity, and that makes them a better source for new cards than the likes of Amazon, Best Buy, and Newegg.

There’s a chance that Amazon may still have some pre-built systems on offer this year, but realistically you’re likely to get a better deal on going straight to builders’ sites themselves. Alienware regularly runs deals on its Aurora machines during big sales events, and iBuyPower might well have some of its ready-built systems on sale and available to ship at the drop of a hat.

Gaming monitors is another space we expect to see filled with new deals on existing screens. There are new HDMI 2.1 monitors on the way later this year, but for us PC gamers we’re all about DisplayPort and so the current generation of panels are pretty darned good. And if we can get a high refresh rate gaming monitor for a good price we’re going to be happy.

Prices for 4K panels, and even ultrawides, have dropped in recent times, and we expect to see some shiny 120Hz or 144Hz gaming monitors getting the discount treatment around the web this Prime Day, whether that’s at Amazon direct or as a result of the sales event elsewhere.

Prime Day always seems to mean TV deals, and with HDMI 2.1 already filtering into the specs list of existing TVs that means we’re getting a whole load more gaming capable big screen panels. Historically the issue was that a 4K TV was often limited to 60Hz over HDMI, but the latest screens have taken the shackles off and you will often find a 120Hz 4K TV for a great price.

And a good, high refresh rate TV can be your cheapest ticket to big-screen PC gaming, and we’re confident there will be deals about to tempt us away from gaming monitors this year.

Storage is another traditional Prime Day deals hot spot. The biggest discounts will often be on eternal drives, but you’ll also likely see some decent deals on internal components too. Whether that’s an NVMe SSD to speed up boot times and game loads, or a SATA SSD for big data storage, Amazon Prime Days PC deals are likely to throw up some solid state storage bargains.

There’s also a good chance you’ll see unfeasibly large hard drives on offer too, with healthy discounts on some 10TB spinning platter for you archivists out there.

Components are potentially where we’ll see some weakness when it comes to actual deals. As we said at the start, there aren’t going to be any GPU deals as there simply aren’t any graphics to buy at MSRP, but there is a chance you might find some discounts on processors.

The CPU wars between Intel and AMD have lead to some excellent budget chips, and if stock allows there might be some deep discounts to heat things up. But, as ever when it comes to PC components in 2021, it really is all about stock levels.

System memory is another place where we might see some components deals hitting these pages, so if you’re in the need for a couple new sticks of RAM keep us bookmarked.

I can almost guarantee that headsets, keyboards, and mice are going to offer up some of the best Amazon Prime Day PC gaming deals this year. And are likely to be the most affordable too.