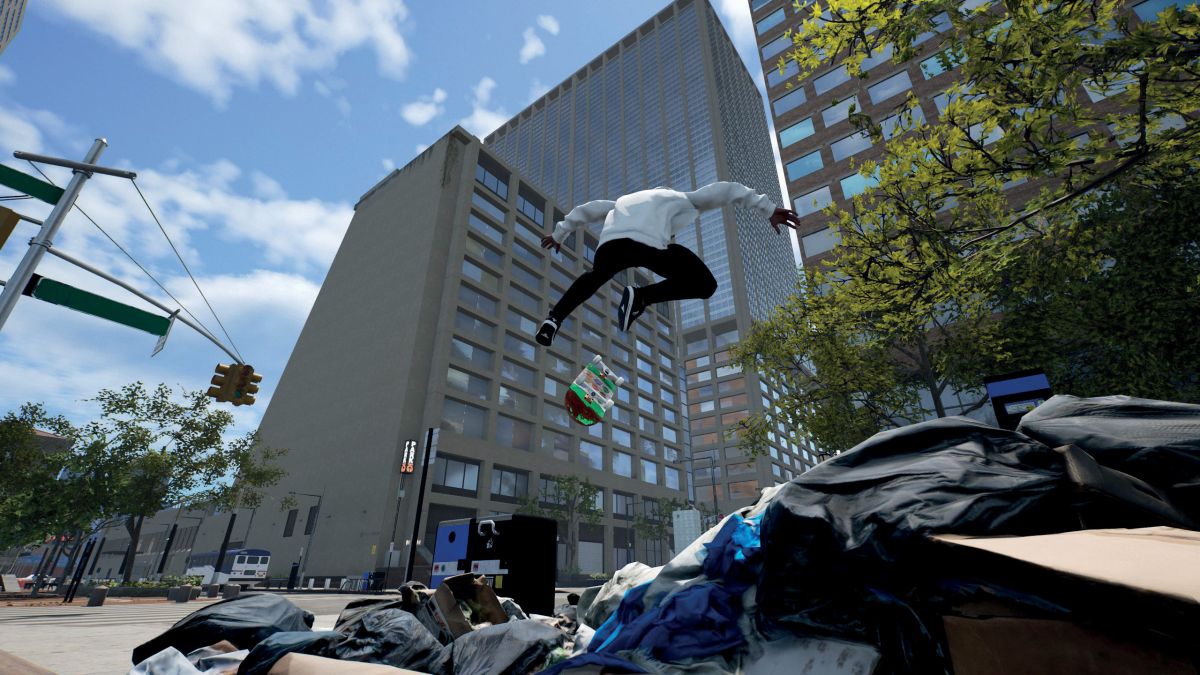 Another month has passed which means more stories about our videogame adventures, straight from the PCG magazine. Andy tells of his space empire escapades in Slipways, Robin learns about his newfound love for traps in Curse of the Dead Gods, Nat needs some medical attention after breaking both shins in Session, and Sam laments at his leaderboard rivalries in Hitman 3. Enjoy!

Building a space empire in Slipways, one trade route at a time—Andy Kelly

Every strategy game or management sim I play, the same thing happens. I love it at first, but then my city, space empire, civilisation, or whatever it is grows to a certain size, and the micromanagement becomes unbearable. The joy is sucked out of the experience and I quit, destined never to finish a game.

I’ve lost count of how many abandoned empires are sitting in my Steam cloud saves, destined never to be completed. So when I heard about Slipways, a new strategy game that lets you build a space empire without the busywork or time investment, I felt like someone had made a game specifically for me.

Start a new game and you emerge from a wormhole into an unexplored, randomised galaxy. Launch probes from the wormhole and planets are revealed, which can be colonised. Each planet, depending on its biome and available natural resources, supports a different kind of industry, such as farming, robot manufacture, water production and many more.

The key to building a successful space empire is connecting these planets with slipways—think sci-fi shipping lanes—in such a way that your planets work together. An agricultural world will be able to produce a small amount of food on its own for the factories on a nearby planet, but production will speed up dramatically, and the factories will be happier, if you supply them with a steady flow of workers.

So if you’ve settled another planet in the region that produces workers, connect it to your farming world with a slipway and you’ll create a supply chain that boosts your profits and keeps the factory workers happy.

But here’s where things get tricky: the planet producing the workers needs resources too. A clean water supply, perhaps. So you’ll need to connect their world to a planet that produces water with a slipway, otherwise they’ll experience a resource shortage and the happiness of your empire will suffer. And if people grow too unhappy, or you go bankrupt, it’s game over.

But the magic of Slipways is how much fun creating these little routes between planets is. The game’s interface is readable, snappy and simple to use, and establishing slipways is as simple as dragging a line between two planets.

Watching the slipways form, and tiny resources being beamed back and forth through them, is extremely satisfying. And not an inch of the UI is wasted, presenting all the key data in a way that allows for quick decision making.

It’s one of the best-feeling games I’ve played in ages, with a clean, presentation and a relaxing ambient soundtrack that perfectly complements its laid back vibe. I also love that there’s no combat whatsoever. This is really refreshing, and as someone who just likes building stuff, only makes me love it more. Slipways is out later this year, and it’s worth keeping an eye on.

These days it takes a lot for a roguelike to stand out, so it was a pleasant surprise for me this month to be so wowed by Curse of the Dead Gods (see our review on p82). The punchy combat, grim atmosphere, and meaningful decision-making sucked me in immediately. But one of the things that impresses me most about it is the traps.

I struggle to think of any game where I’ve found traps fun. Usually they’re anti-fun—the thing that slows you down, or punishes you for inattention. But here they’re a thrill.

As you explore the dark temples, you encounter all manner of deadly devices left behind by the architects—from electric landmines to living statues. Learning how each one operates is vital to survival.

Avoiding them is simple, in theory—each has a short animation before it goes off, giving you just enough time to dodge. But all of the game’s other systems factor in to how you approach them. You only have limited stamina for dodging, for example—which means if you run into a trap when you’re out of breath, you won’t be able to escape. Light is important, too—being in darkness causes you to take more damage from foes, but it also obscures traps, driving you to always be seeking out sources of illumination.

But they can be turned to your advantage, too. Enemies don’t set them off, but they do take damage from them—and one of the items in the game allows you to recover health every time a monster is killed by one. Kiting foes doesn’t just feel like some awkward way to cheese fights. It’s an exciting test of your evasion and timing skills.

Traps even interact with other traps. A fire launcher might set webbed ground alight, which then reaches an explosive pot and sets it off, for example. Often these interactions are woven together into cascading gauntlets, triggered by your approach. Rather than being a nasty surprise, they’re an inviting challenge, baited with gold. Can you figure out what’s going to happen when you step over the threshold? How much treasure do you think you can gather as you sprint to safety?

That’s the key to it—traps aren’t an added annoyance, they’re another layer of decisions in a game already full of them. I think for the first time ever, I don’t feel hard done by when I die to spikes underfoot.

Last September, I made the ill-considered decision to get into skateboarding as an adult—and not to brag, but I reckon I’ve gotten rather good at it. But while I got in a good few weeks of tearing through town while the weather held up, a Scottish winter predictably binned my plans to spend every free minute busting out sick moves. So, in the meantime, I’ve started popping a few ollies around Session, one of the growing number of skate-’em-ups gunning for Skate’s long-absent throne.

Let’s be real for a moment. Session is rough. After a year and a half in Early Access, the game’s still very clearly not done, with rampant physics glitches, unfinished character models, and only the most barebones structure. It’s only this year that the game stopped hilariously ragdolling you at the smallest collision. But for all its jankiness, Session actually gives me the same sort of dopamine rush I get whenever I throw down a board at the local park.

See, while there are some loose challenges and missions to take on, Session largely wants you to find your own spots—to explore its facsimile of some iconic New York streets and skateparks and figure out how you wanna shred ’em. I spot a ramp popped in front of a trash heap with a long, gentle downwards incline leading up to it, and decide I’m gonna treflip over the garbage. It takes a good dozen or so tries—I veer off course, stumble over my own feet, and send the poor skater careening into the street after clipping a bin bag. But with enough persistence, I nail it and I feel incredible.

It’s a similar sensation to when I finally landed a 50-50 grind off the steps in town after spending an afternoon battling the trick a week prior, or finally landing my first ollie after months of trying.

Obviously, my digital skater can pull off more tricks than my wobbly, untrained legs, so the lines are more complex—and more dangerous. I have a bash at chaining a grind into a nose-stall at the edge of a five-storey building, an act that breaks my skater’s neck ten times over. Twenty minutes later, I land it. Didn’t even have to call an ambulance.

Between spots, I get to hone my tricks with every passing curb or bench. Like Skate, tricks are a little more difficult to do than slamming a gamepad button, as the analogue sticks are tied to your front and back feet. It’s fiddly at first, but much like how I’ve built muscle memory for popping an ollie, I’m slowly beginning to internalise how to wrangle the sticks to form a shuvit, kickflip, or noseslide. Cruising around New York, I can see a future where I too can effortlessly flip and slide down Edinburgh’s streets.

Tony Hawk’s Pro Skater 3 pushed me to pick up a board for the first time. Now, over 20 years later, Session is motivating me to become a better skater. I’m down with that.

My friend Dave, though, is at the bottom of the leaderboard with a score that’s around a third of mine. Ha! Good old Dave. He always knows just how to cheer me up. Leaderboard rivalries are what we call friendships in 2021.

The problem is, I’ve wiped my progress in Hitman 3 and I’m starting again. I played the game before release, being in the privileged position that I am to receive review code, and I knocked through all the levels in story mode pretty quickly. By importing my Hitman 2 progress, however—where I waged a leaderboard war with Phil back in 2018—my Hitman 3 progress has been reset. And now I’m crawling back to the top, bit by bit, with every costume swap and new starting point in each level taking me closer to number one. I won’t get there. I’m too tired to be competitive in 2021.

I’m reminded of the guy in The Wire who gets out of jail after many years, tries to get back into drug dealing, then realises it’s become a game dominated by younger, hungrier entrepreneurs. Instead, he picks a different path and forms a youth club where kids can take up boxing. Maybe that’s what I should do instead of trying to beat Phil.

The levels in this game are great, and amazing in a couple of cases—Dartmoor’s immersive murder mystery is dazzling the first time, and it’s a top level to try and optimise in subsequent playthroughs. Mendoza, a giant Argentina-set stage where Agent 47 can infiltrate a Bond lair-style locale which is hidden by a vineyard, is one of the best levels of the entire trilogy. It’s so big, though, that I’m struggling to get really good at bringing my time down in that one.

That said, the magic of Hitman is that even its most sprawling levels seem to shrink in your mind the more you play through them. They slowly go from feeling intimidating to weirdly cosy, like locations in real life that you love revisiting.

I haven’t gotten this comfortable with Hitman 3’s levels yet. But I have a plan. When everyone loses interest in Agent 47 during the summer, I’ll have spent months mastering Dubai—and that’s when I’ll beat Phil’s three minutes and three seconds score, tweeting him at the dead of night with a screenshot of our times to let him know the deed has been done. How embarrassing! For me.