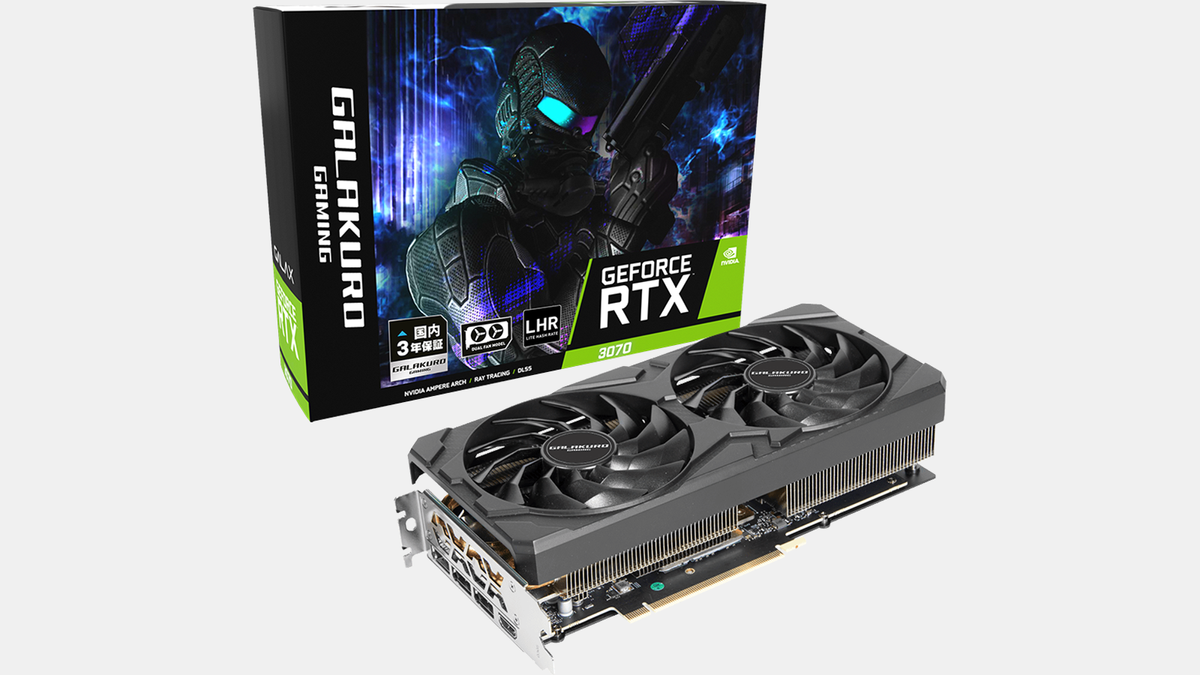 Gone are the days when add-in-board (AIBs) makers would introduce Mini-ITX graphics cards based on top-of-the-range GPUs. Today, virtually all premium graphics AIBs are large and can barely fit into many typical desktops. To address such systems, Palit’s partner in Japan this week introduced a GeForce RTX 3070 LHR graphics card that is shorter than other RTX 3070 boards on the market, including Nvidia’s own RTX 3070 Founders Edition.

Galakuro’s GeForce RTX 3070 LHR (GG-RTX3070-E8GBOC/DF/LHR) carries Nvidia’s GA104 GPU with 5888 CUDA cores clocked at up to 1725 MHz as well as 8GB of 14 GT/s GDDR6 memory that connect to the processor using a 256-bit interface. The card has four display outputs (three DisplayPort 1.4a, one HDMI 2.1) as well as one eight-pin auxiliary PCIe power connector. Like other products designed by Palit, this one is compatible with Palit’s/Galax’s XtremeTuner software.

The AIB does not feature an extreme GPU clock or an enhanced VRM to ensure superior overclocking potential of the card. Its main selling point is a 238 mm length: this is 4 mm shorter when compared to Nvidia’s own GeForce RTX 3070 Founders Edition and is about 120mm shorter when compared to typical GeForce RTX 3070 boards from AIB makers. Lower length of the card will allow its installation into PCs that cannot house a 400-mm graphics card, such as smaller ATX, Micro-ATX, or even larger Mini-ITX systems.

There is a catch though. Palit’s GeForce RTX 3070 LHR has a rather massive cooling system with two 102mm Wings fans that makes it 54 mm thick and 128mm high, which will likely make it incompatible with certain PCs.

The 238mm GeForce RTX 3070 LHR made by Palit is currently available only in Japan from its partner Galakuro Gaming. Hermitage Akihabara reports that the board has been announced, but it does not say anything about its price.

What remains to be seen is when (and if) the Palit-made 238mm GeForce RTX 3070 LHR board is set to arrive to the U.S. and Europe under KFA2 and Galax brands. There are loads of cases that cannot comfortably accommodate a full-size 400mm graphics card and many of their owners are looking forward to upgrading their graphics cards, so chances that Palit will bring the board to these markets are fairly high.