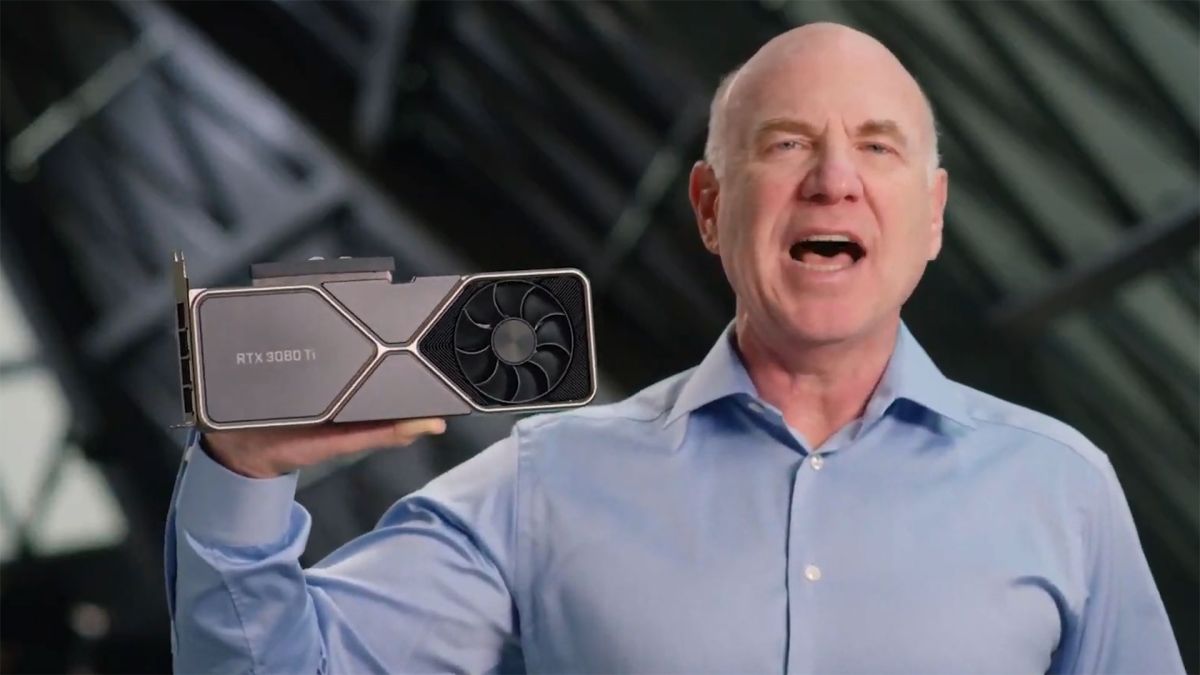 After months of rumors and speculation, Nvidia has finally revealed the GeForce RTX 3080 Ti, the long-awaited heir to the GeForce RTX 2080 Ti. Forget the earlier 20GB VRAM rumors; the 3080 Ti is basically an RTX 3090 with half the VRAM. With specifications and performance so close to the GeForce RTX 3090, the new Ampere offering will have no problems competing for a spot with the best graphics cards on the market. Here’s the quick overview:

We can also look at the more recent Ampere GPUs for comparison. The GeForce RTX 3080 Ti is only a hair behind the GeForce RTX 3090 in most areas, with the biggest difference being VRAM capacity. 3080 Ti wields 12GB of GDDR6X memory at 19 Gbps, on a 384-bit memory interface, meaning the GeForce RTX 3080 Ti lands with a maximum theoretical memory bandwidth up to 912 GBps. On paper, it’s only about 3–4% behind the 3090, except for having half the memory. Alternatively, the 3080 Ti has 14% more compute and 20% more bandwidth than the vanilla RTX 3080.

For better or worse, the 3080 Ti takes after the GeForce RTX 3080 in terms of design — if not for the “Ti” branding, we’d swear that we’re looking at a GeForce RTX 3080. The GeForce RTX 3080’s dual-slot cooling system is less robust than the GeForce RTX 3090’s triple-slot cooler, though really it’s the GDDR6X memory that gives us the most cause for concern. The 3090 and 3080 Founders Edition cards could run very hot on the memory, and the same goes for a lot of the third party designs. Adding two more GDDR6X modules isn’t going to improve the situation with the 3080 Ti.

The GeForce RTX 3080 Ti’s other attributes align with those of the non-Ti. The Founders Edition is still happily rocking Nvidia’s 12-pin PCIe power connector. Display outputs still come down to one HDMI 2.1 port and three DisplayPort 1.4a outputs.

Nvidia is set to launch the RTX 3080 Ti on June 3, with an official launch price of $1,199. Considering the rest of the graphics card market right now, not to mention what we’ve seen of previous Ampere launches, that price is likely to be meaningless throughout 2021 and into 2022. The RTX 3080 continues to immediately sell out and generally goes for over $2,000 on eBay, and the RTX 3090 lands closer to the $3,000 range right now. Unless Nvidia can produce a lot more GPUs and cards, shortages and price gouging are likely to continue.

Besides the RTX 3080 Ti, Nvidia also officially announced the RTX 3070 Ti. It didn’t reveal exact specs, but it will continue to be an 8GB card. That’s a bit unfortunate, though jumping to 16GB would have made the other cards in the RTX 30-series look a bit weak. This ends up being a moderately faster variant of the existing RTX 3070, likely still using the same GA104 chip, only this time with all 48 SMs enabled.

Given the target 22 TFLOPS of performance, we expect a GPU clock of around 1790 MHz, though rounding means it could be +/-25MHz. The memory might come clocked a bit higher as well, like the 15Gbps we saw with the RTX 3060. Either way, it represents an incremental improvement in performance over the RTX 3070, and it gives Nvidia a chance to realign prices with the current market by bumping the price up to $599.

Not that we’re likely to see cards at that price at retail in sufficient quantities, but unlike graphics cards, dreams are free. We’re looking forward to testing and reviewing both the RTX 3080 Ti and RTX 3070 Ti in the coming weeks.