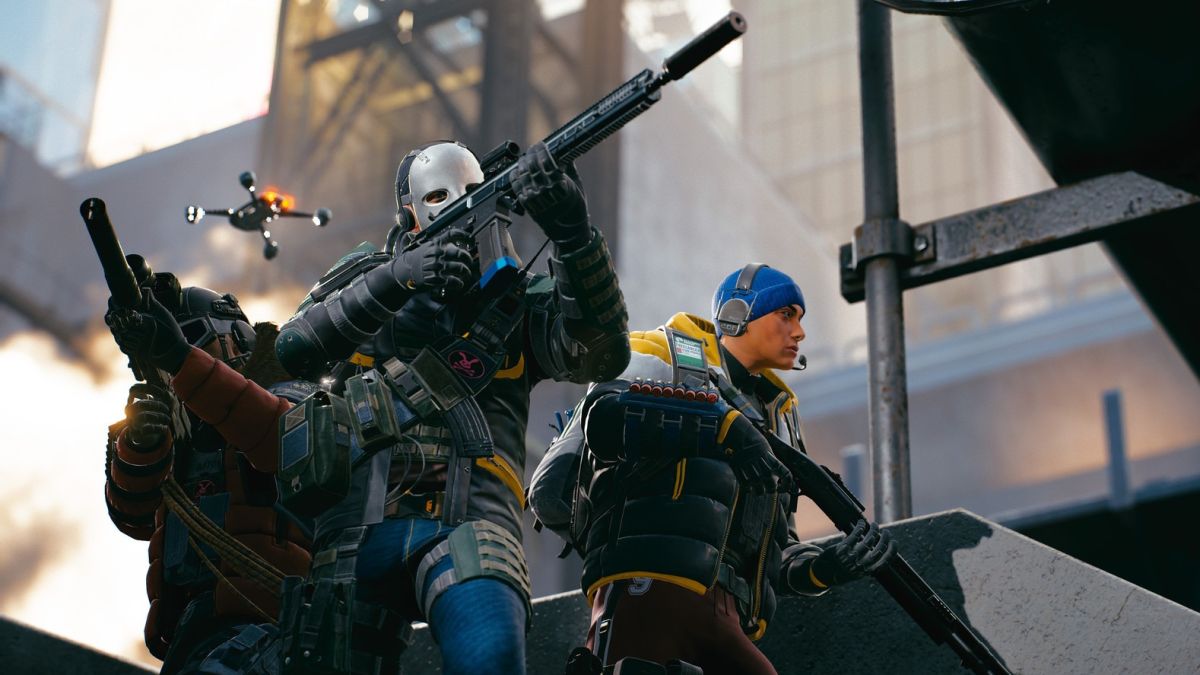 Do you remember when Rainbow Six Siege was first announced in 2014 with that fancy E3 demo? It had fake actor/players who said all sorts of tactical stuff on the mic, considered each step super carefully and treated the game like a delicate operation that could implode at any moment. It’s unrecognizable to the Siege of today, a (very fun) game that often favours twitchy gunplay and speed over tactics. The promises of that 2014 Siege video flooded back to me while playing a demo for Nine to Five, a 3v3v3 tactical FPS that wants you to take your time and actually make a plan.

Nine to Five is kind of like Siege on a larger scale. Maps can range from a city street with building interiors to one gigantic facility with four floors and tons of verticality. Despite having an extra team thrown into the mix, the 9-player total match is actually a bit smaller than the standard 5v5 FPS setup.

Because of the big maps and extra team, it’s easy to let one or two nerve-wracking minutes go by without any confrontations. It’s a lot like the final phase of a battle royale match when nobody wants to be the first team to open fire out of fear of being third-partied by another squad. That happened more than once during my matches, especially when we were the sole defending squad against the other two teams. But unlike a battle royale match where survival is all that matters, there’s always an objective to hold or capture, so sitting back and letting the other teams fight amongst themselves is risky.

That’s especially true when you rarely know where the next objective is going to be. Nine to Five matches cycle to a different mode each round (capture and hold, bomb site defense, or extraction)  with the winner of the prior round getting some sort of material advantage in the next one. The advantage is usually information that only your squad gets, like the exact location of the capture point the six other players are looking for, or the privilege of being on defense instead of attack (not really sure how advantageous that one is).

You can watch your drone’s view in the lower right, though it will disappear by default while aiming.

Since the location of an objective is random, you can’t really play the same mind games you would in Counter-Strike or Siege to anticipate which bomb site the defense will favor. I’m skeptical of this approach as a fan of mind games, but maybe a predictable pattern will emerge once I have hours of each map under my belt.

Every player can carry a drone, a few secondary gadgets, and usually a few passive abilities. Any weapon can be selected by any player, but which gadgets and abilities are available to you depends on your equipped armor set (the closest thing Nine to Five comes to specific classes or operators). The heavy “Man of Steel” armor, for instance, can carry more tactical grenades and absorb more damage while the standard body armor I used most of the time could bring more passive abilities like reduced fall damage or an automatic alert when you’ve been pinged by a drone.

It’s not quite as pure as CS:GO’s unchanging arsenal, but it’s also not the overwhelming avalanche of character-specific abilities and tools that new Siege or Valorant players have to contend with. You won’t run into too many surprises as long as you know that drones can spot you, doors can be barricaded, and auto-turrets are a thing. The absence of some of Siege’s more outlandish intel tools like footprint scanners, laser cameras, or bomb drones leaves a bigger emphasis on the core info-gathering power of the single flying drone you get each round.

I really like Nine to Five’s twist on the traditional hovering drone that I’ve flown in dozens of games. You can fly the drone around like normal, but you can also leave it to monitor an area and watch its live feed from a picture-in-picture window on your HUD. At one point, I used the picture-in-picture view to literally watch an enemy approach the wall I was hiding behind and easily take them down as they entered my view. The same maneuver isn’t quite possible in Siege (you’d have to watch them on camera and then exit that view to control your character).

It’s a neat system that Siege fans have requested for years, but has never happened because the performance cost of rendering two viewports at the same time is too high. That tracks with Nine to Five: the developers I played with told me the picture-in-picture mode could hinder performance.

I didn’t notice any difference when using picture-in-picture, but that’s only because my performance was already inconsistent on an RTX 2060. It was a pretty bumpy ride with the biggest fps dips happening whenever the action ramped up. I got by fine most of the time, but it kept me from winning one particularly painful 1v2 scenario that I almost clutched with a sniper rifle. Ah well. I watched a few other people play it during its Steam Next Fest demo period and it seemed to run alright for them, so maybe I’m an outlier.

The inconsistency also made it hard to get a good grasp on Nine to Five’s weapons, but they mostly feel fine. I saw a standard lineup of assault rifles, LMGs, SMGs, and sniper rifles. Gun sounds are a little generic and the longer time-to-kill compared to many shooters makes firefights a little less lethal than I prefer. Survivability feels a bit closer to CS:GO with added opportunities to heal yourself with syringes or deployable health packs. When I think of tactical shooters, I think of unforgiving one-shot-kills in Siege or Escape From Tarkov. Nine to Five is decidedly more forgiving and firefights are blander for it.

A more accessible take on the hardcore FPSes I’m used to is appealing as a way to get friends involved in my favorite genre. That said, I have serious doubts about Nine to Five’s longevity. Its unique hooks, like the 3v3v3 setup and mode switching, feel like minor variations on more established games and its pre-release jank is very noticeable. Placing traps was cumbersome, animations were awkward, and the drone was the only interesting piece of kit I encountered.

Nine To Five does deliver on the intensity of that original Siege E3 demo, but by the end of my matches, I was looking for more complexity. I already get my tactical FPS fix in more robust and fun games like Siege, Squad, or Tarkov. In its current state, I can’t see Nine To Five becoming a mainstay. What it has over all of these games is a plan to launch free-to-play, though it’s unclear when that’ll be. The release window is simply listed as “TBA’ on its Steam page.