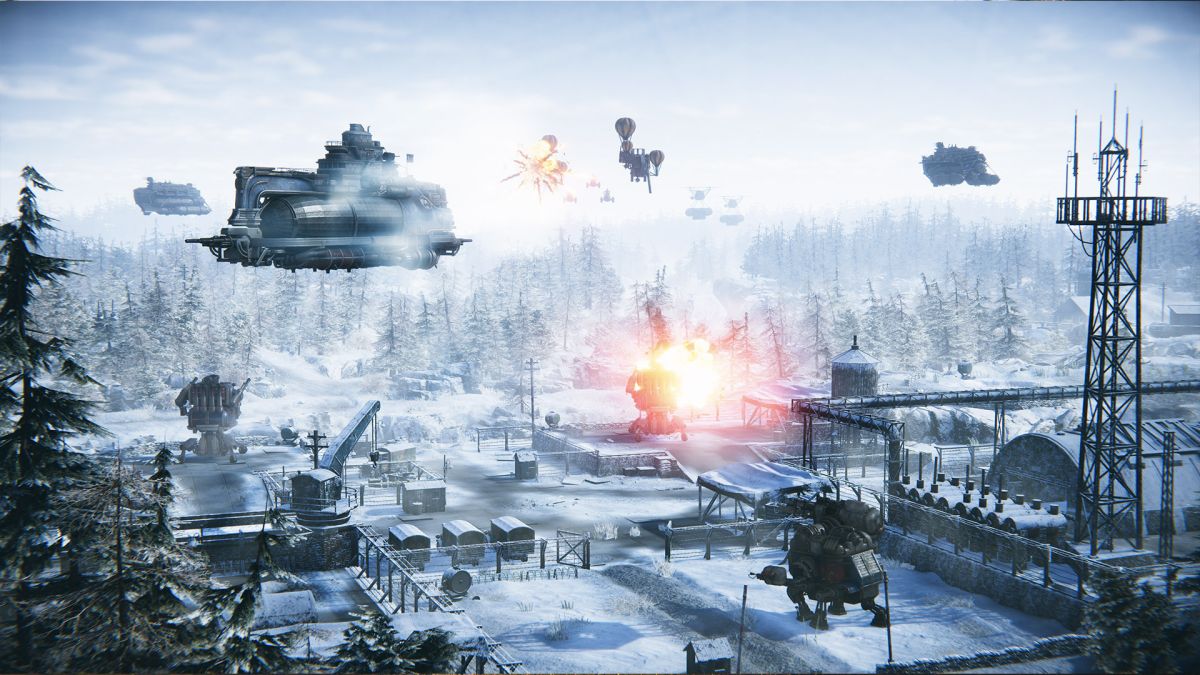 I mostly enjoyed Iron Harvest when I reviewed it last year. The Company of Heroes-style RTS matched Relic’s eye for spectacle, while its thrumming, diesel-powered mechs were as imaginative as they were awesome. But I had one major complaint, which was that the end of a match always turned into a tedious slog thanks to a combination of agonisingly slow late-game units and AI that’s uncannily good at producing reinforcements.

I’d hoped the recently released Operation Eagle DLC might have fixed this issue, but instead the expansion makes the problem far worse. What was once a flaw that affected only the latter-stages of a mission now affects the whole campaign, turning matches into a ceaseless and unpleasant struggle that never give you a second to breathe.

It’s unfortunate because, on paper, the expansion sounds great. Operation Eagle introduces a new faction called Usonia, which, if you know anything about architecture, was a term coined by the architect Frank Lloyd Wright for his idealised vision of an American lifestyle. No doubt you can surmise from that where Iron Harvest’s new faction is based geographically, although I doubt Lloyd Wright’s philosophy included hulking ferrous death-machines smashing the shit out of one another.

In any case, Usonia becomes embroiled in Iron Harvest’s previously Eurocentric war after the Rusviets invade Alaska. The campaign’s story follows captain William Mason as he fights first in Alaska and then in Arabia, where he’s tasked with helping a guerrilla force of Bedouin tribespeople oust their Saxon colonisers. It’s a story that delves surprisingly deep into America’s shift from being an insular country into a highly interventionist one although, as with Iron Harvest, Operation Eagle’s storytelling is let down by iffy writing and acting that doesn’t so much chew the scenery as swallow it whole.

A new faction obviously means new units, and Usonia’s mechs are an eclectic bunch. They include a walking machine-gun nest ideal for mowing down squads of infantry, and a weird, beetle-like mobile artillery unit that has the unique ability to cloak. The star of Usonia’s armour is undoubtedly the Knox. A walking arsenal armed with just about every kind of gun and missile-launcher you can imagine, the Knox is the second amendment in mech form, ripping through enemies with its overwhelming firepower.

But Operation Eagle does more than provide a suite of all-American mechs. It also adds several unique Arabian units, such as sword-wielding Hashashins and machinegun-toting camel riders. Most notable, however, is the addition of a new vehicle type to Operation Eagle—Airships. As with mechs, airships come in multiple classes, ranging from what is basically an inflated sack with a machine-gun tied to it, to a propeller-powered capital-ship that deploys swarms of drones to carpet-bomb enemy positions.

These airships look every bit as cool as the giant mechs that make Iron Harvest such a visually distinctive RTS. But like the walking buildings of the first game, the airships are also the source of trouble for Operation Eagle. You’d think airships would be the perfect solution to Iron Harvest’s attritional endgame, a comparatively nippy vehicle that helps punch through a stubborn yet futile defence. But Iron Harvest’s airships are just as slow as the mechs, while also being more fragile than their terrestrial equivalents. They also make fights more confusing, obscuring other units from view and having an annoying tendency to float off after retreating enemies.

Operation Eagle’s main problem, however, is that so many of the missions are tedious exercises in grinding out victory. Problems begin in the second mission, where you’re tasked with re-taking an Alaskan oil-refinery from the Rusviets. Capturing the refinery feels like a natural conclusion for the mission, but then Operation Eagle springs a massive Rusviet counterattack on you, assaulting your positions both at the refinery itself and at the base you built on the other side of the map. There’s no warning this might happen, and the game gives you one measly minute to prepare your defence. Later missions see you constantly harried and harassed by enemy forces from the moment the mission starts, with the enemy able to spew out an endless torrent of mechs while you can barely get a tent up without it being shot full of holes.

Operation Eagle is designed to be completed after Iron Harvest, so it’s reasonable for it to be more challenging. But at one point I switched the difficulty down to easy and it made no discernible difference to the experience, suggesting Operation Eagle is not particularly well-balanced. Moreover, the way missions start at 11 exacerbates the problem of the main game, which is that lost ground takes ages to recover because the mechs are so darned slow. Indeed, despite being designed to push Iron Harvest’s mech-on-mech action to the limit, I ended up enjoying Operation Eagle’s smaller, infantry-focussed missions more, because I could actually think about the tactics of each encounter and wasn’t constantly rebuilding my defences or fighting fires across the map.

These problems aren’t impossible to fix. A better graded opening to missions and more time to process their various twists and turns would help Operation Eagle considerably, while the airships would have a bigger impact if they were more durable and reliable. But as it currently stands, the concoction of gases that keeps Operation Eagle afloat also makes it too volatile to enjoy.