Just a day after Intel stated that its Xe-HPG DG2 GPU powered graphics card lineup is right around the corner, a new leak has unveiled specifications of several laptop and desktop SKUs which will be launching later this year.

Published by Igor’s Lab, the latest details show a block diagram that suggests that Intel had initially planned Xe-HPG DG2 GPUs for its high-end Tiger Lake-H chips which are launching next week but it looks like the lineup didn’t align with the 11th Gen CPU launch hence they will now be introduced in the 12th Gen Alder Lake-P laptops that launch in the second half of 2021.

Looking at the block diagram, we can see that the Tiger Lake-H and the Intel Xe-HPG DG2 mobility GPU will be connected through a PCIe Gen 4.0 x12 interface. The GPU has its own subsystems that are connected to it as represented below: 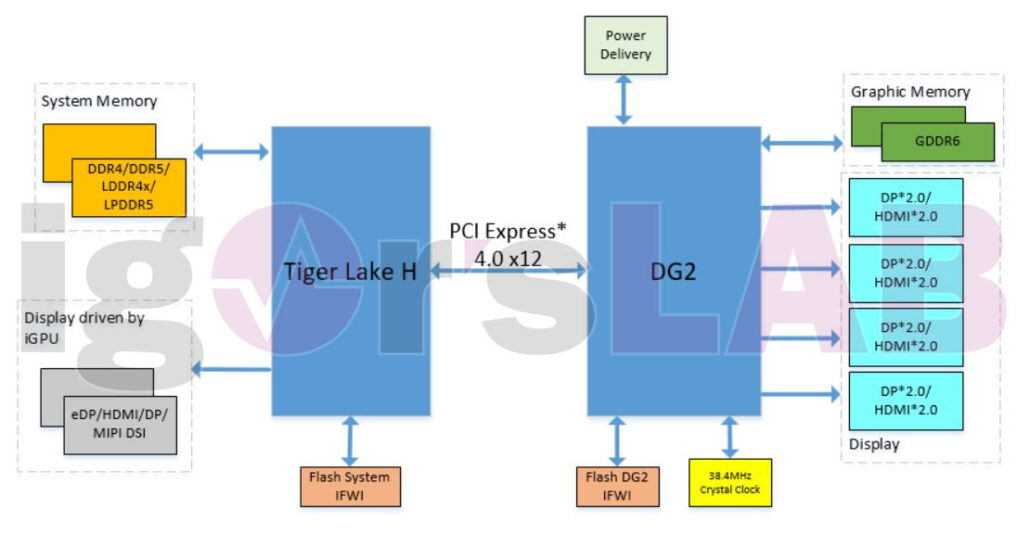 Interestingly, TUM_APISAK confirms that this was the case as he spotted an Intel Xe-HPG 416 EU part clocked at 1100 MHz on the Tiger Lake-H platform back in March.

Moving to the specific SKUs, the Intel Xe-HPG DG2 GPU lineup for desktop and mobility platforms will feature at least 5 SKUs. The first three SKUs are based on the BGA2660 package & feature up to 512 EUs (Execution Units) or 4096 cores. It looks like the rest of the BGA2660 SKUs but will end up with different die sizes based on the configuration.

Each Xe-HPG based DG2 GPU SKU will come in various configurations which will range from the full-fat chip to several cut-down variants. This is similar to NVIDIA’s Ampere GA102-400, GA102-200 naming schemes, or AMD’s Navi 21 XTX, Navi 21 XT, Navi 21 XL naming conventions. The top DG2 512 EU variant has just one configuration listed so far and that utilizes the full die with 4096 cores, 256-bit bus interface, and up to 16 GB GDDR6 memory (8 GB GDDR6 listed too). Based on demand and yields, Intel could produce more variants of this flagship chip but we can’t say for sure right now.

The 512 EU part is suggested to feature an 1100 MHz base and 1800 MHz turbo clock speed on the mobile platform. The chip will carry 16 MB of smart cache and will come in a 100W TDP package.

What’s interesting is that

The Xe HPG GPUs based on the Gen 12 graphics architecture is a brand new design hence it is expected of them to feature brand new shading techniques such as these. Other than that, Intel discrete graphics cards will fully support ray tracing and a range of other capabilities.

We have seen the Intel Xe-HPG DG2 GPU-based discrete graphics card engineering sample leak out last month along with some rumored performance and pricing figures, you can read more on that here. All we know for sure is that Intel will be launching its DG2 lineup later this year for desktops & mobility PC platforms.