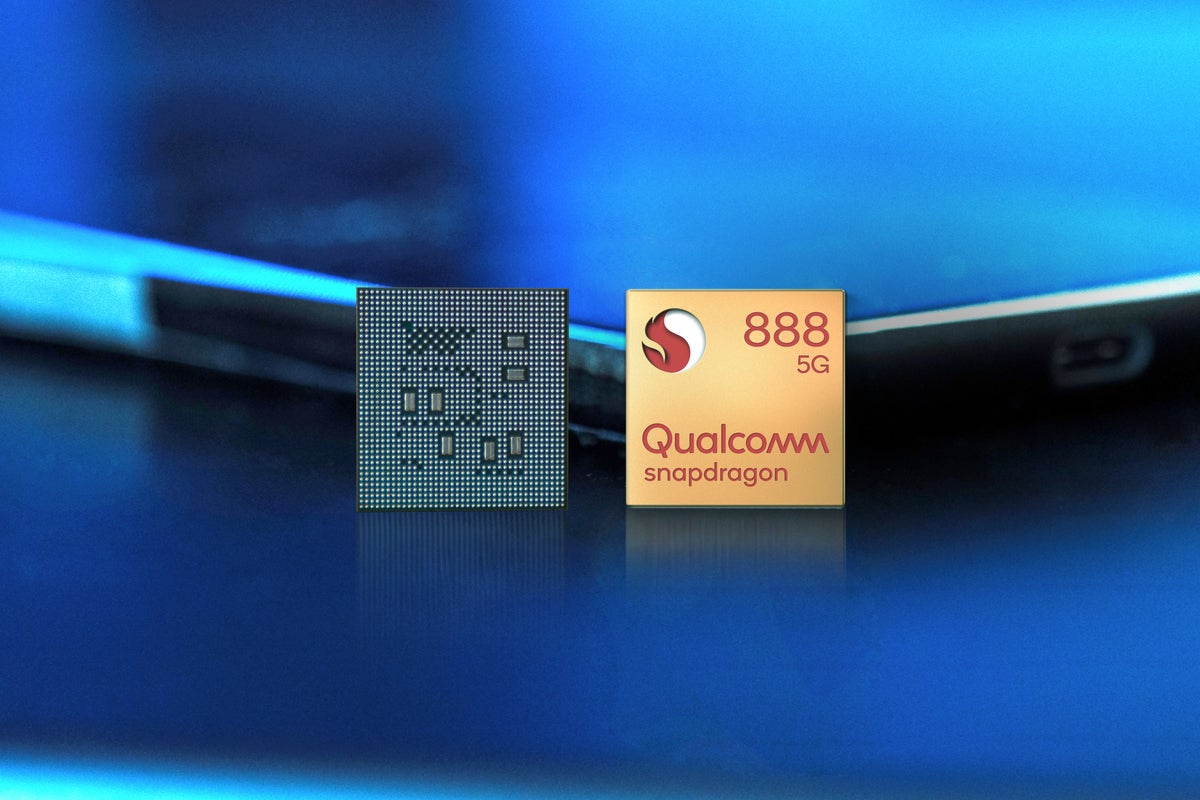 Smartphones built upon Qualcomm’s upcoming Snapdragon 888 processor will be able to take advantage of concurrent recording and HDR using three different cameras, a creative feature that will allow consumers and content creators additional options for crafting the perfect photo and video. It’s one of many new features inside the new mobile chip, including integrated 5G.

The Snapdragon series represents the chief opposition to the Apple iPhone and its A-series processors, powering rivals like the Samsung Galaxy S20 and the OnePlus 8 series. The new Snapdragon 888 will ship inside flagship smartphones beginning in the first quarter of 2021.

Qualcomm introduced the Snapdragon 888 and its basic capabilities at its virtual Snapdragon Technology Summit opening keynote on Tuesday. The company spent Wednesday diving deeper into the chip’s capabilities.

The Snapdragon 888 will continue expanding on its various axes: computational performance, graphics performance, AI, and more. Qualcomm says the chip will be manufactured on a new 5nm process, helping its new Kryo 680 CPU core achieve 25 percent faster performance than its predecessor, and the new Adreno 660 core perform 35 percent faster than before. The 888 also includes the Hexagon 780, the new Spectra 580 ISP, and the integrated X60 5G modem—the first time an 8-series Snapdragon has had an integrated 5G modem.

What’s inside the Snapdragon 888

Below is a high-level overview of the Snapdragon 888. Feel free to use our table of contents to jump ahead about what this all means in terms of real-world features, or refer back to our coverage of the prior Qualcomm Snapdragon 865 for more granular comparisons.

Unlike with the Snapdragon Compute chips for Windows on Arm, the Kryo 680 CPU at the heart of the Snapdragon series has never been top-of-mind for smartphone buyers, mobile gamers excluded. With the Snapdragon 888, however, there are two key features: a new ability to sandbox apps within virtualization, and a CAI-qualified camera.

Virtualization allows your smartphone to function as both a work device and as a personal device, with specific versions of the Android OS for both. (Samsung’s Knox has something like this already.) It also allows micro-OSes for specific apps like wireless payments, explained Ziad Asghar, vice president of product management for Qualcomm.

Snapdragon 888 smartphones have also been qualified as the first CAI-compliant smartphone camera. The Content Authenticity Initiative and TruePic, plus Adobe, Twitter and the New York Times, worry that photos are being stolen and altered without the photographer’s consent or knowledge. CAI will allow CAI-qualified cameras to create a cryptographic “seal” around an image, Asghar said.

The Kryo 680 is 25 percent faster than the Kryo core within the Snapdragon 865, and 25 percent more power efficient, too.

Qualcomm isn’t disclosing the total power draw of its Snapdragon 888 yet, but the new 5nm process, plus the modem integration, typically means lower power consumption and therefore longer battery life. Available throughput, however, remains the same as the X55: a theoretical peak bandwidth of 7.5Gbps downstream and 3 Gbps upstream.

More significantly, Qualcomm’s third-generation X60 modem offers an olive branch of sorts between the 5G mmWave and sub-6GHz technologies. Essentially, mmWave offers blazing-fast throughput, but clustered around “hotspots” with ranges limited to something like yards, rather than miles. (Qualcomm and Ericsson have showed off 5G mmWave-NR technology at over 100Mbits at 5 km, though it hasn’t been commercially deployed.) So-called “sub-6” 5G has been deployed by carriers like T-Mobile; it offers somewhat comparable coverage as 4G LTE, but with higher bandwidth.

The X60 allows what’s known as sub-6 carrier aggregation, which combines several sub-6GHz channels, increasing the available throughout without the need for mmWave coverage. Carriers in the United States are currently adding that capability, according to Qualcomm. The X60 also supports mmWave-sub6 aggregation for even more bandwidth, but that’s due to be rolled out by U.S. carriers late in 2021.

Don’t forget about Wi-Fi 6E. The FastConnect 6900 now supports the 6GHz channel that Wi-Fi 6E added. WiFi 6E’s 6GHz channel has been scooped up by mesh routers as a dedicated backchannel to the home gateway, uninterrupted by the mishmash of 2.4GHz and 5GHz communications on Wi-Fi 6 routers. Smartphones using the Snapdragon 888 will be able to tap into it, too.

Other noteworthy features include Bluetooth 5.2 with not one but two antennas. Bluetooth 5.2, launched this past January, lowers the power draw, improves audio quality, and most importantly, adds multi-stream audio, which could allow you to stream music to a public speaker while still taking a private call on your Bluetooth earbuds.

The Spectra 580 will be able to capture three 28 MP still images from three smartphone cameras, simultaneously. Both 4K/120-fps video capture and playback are supported (at 12 MP @ 20 fps), or, a user will be able to shoot 120 still images in a second. All told, Qualcomm claims that the Spectra 580 is 35 percent faster than its predecessor, capable of handling 2.7 gigapixels per second.

It’s the triple-engine capability that Qualcomm really believes makes a difference, however. Previous Spectra ISPs allowed a phone to capture images and video from two of three camera simultaneously: the wide, ultrawide, and telephoto lenses. The Spectra 580 allows all three cameras to capture at once, meaning you’ll be able to switch among them on the fly. Video using a Snapdragon 888-powered phone will also be able to be captured and played back at 120 fps, a capability that the previous Snapdragon 865 lacked.

Recording three different images at once also means that the smartphone camera can create a composite of those three different images, the basis of HDR. So-called “staggered HDR” sensors have been used in other cameras but are making their way to mobile. When they do, smartphones using the Snapdragon 888 will be able to record video using the three different cameras, take their light and dark image detail, and composite them together quickly enough to allow for 4K video with computational HDR applied to each frame, rather than just a still image.

Last year, Qualcomm began signaling that it would begin adapting its AI expertise to its camera functions, and we’re seeing more evidence of that. This is the first time that its so-called 3A functions (autofocus, auto-exposure, and auto white balance) will be powered by AI. Qualcomm said it had trained its autofocusing capabilities using neural nets and VR. That part of an image that a human naturally focused upon first will be used as a model for your smartphone camera’s focus.

Qualcomm also said that it had worked with Arcsoft, a developer of both embedded firmware and imaging apps, to automatically zoom, too, narrowing in on what the camera thinks is the most important element of the photo. Imagine a camera tracking a bride as she walks down the aisle, with the smartphone using the three cameras to automatically keep the bride’s face in the same proportions as she draws closer.

You’ll see improved still images with the Spectra 580, too: richer 10-bit photo capture using the HEIF file format (with 1 billion shades of color) is now available. Last but not least, Qualcomm has also promised that it will be able to adapt its AI and image-processing capabilities to capture images in as little as 0.1 lux—that’s going to equate to much better “Night Sight” and similar low-light functions in Snapdragon-powered phones.

The Snapdragon 888 uses the Adreno 660 GPU, a chip Qualcomm describes as both 35 percent faster in terms of rendering, and 20 percent more power efficient than its predecessor, inside the Snapdragon 865.

The Snapdragon 888 is the first Snapdragon processor to implement variable rate shading (VRS), a technique Nvidia helped introduce with its RTX 2xxx (Turing) GPUs. VRS works something like foveated rendering in VR; in either case, processing power is concentrated in an area where the game knows your eye is looking, and uses far less rendering where your eye isn’t. (This 3DMark video explains the VRS technology in more detail.) Qualcomm says that can reduce the number of pixels that need to be shaded by about 40 percent, allowing the 888 to render a scene more quickly than otherwise, resulting in faster frame rates. (Within the 865, Qualcomm claimed it could reach up to 144 fps.)

Qualcomm Game Quick Touch is a new feature that greatly reduces touch latency, syncing the refresh rate of the game to the touch input to keep “delayed frames” from slowing down the corresponding touch input as well. Touch latency can be reduced up to 20 percent at games running at 60 fps, Dave Durnil, Qualcomm’s senior director of engineering and head of gaming, explained. It’s all geared to the mobile e-sports community, and the estimated 2.6 billion mobile gamers around the world.

AI continues to be one of the more abstract functions within a desktop and a mobile processor, and the 6th-gen AI Engine’s improvements within the Snapdragon 888’s Hexagon 780 processor seem abstract as well. Qualcomm claims that the engine now supplies up to 26 trillion operations per second (TOPS). “That is more than any other product out there, and it is basically the biggest leap for Snapdragon year over year from an AI capability perspective,” Asghar said.

By placing the scalar, tensor, and vector accelerators next to one another, the workloads can be shared among them. This helps the 888’s scalar performance improve by 50 percent, Asghar said. AI-powered functions, such as those processed by the Adreno 660 GPU, are accelerated by 43 percent. The Hexagon DSP also works in concert with what Qualcomm calls the 2nd generation Qualcomm Sensing Hub,
which integrates a dedicated low-power AI processor to enable use cases like screen
wake, and senses whether your fingers are truly interacting with the smartphone and its display, or are just idly brushing them.

Last year, Qualcomm announced the 765G and 765, too, providing a reduced subset of features for a lower price. Qualcomm hasn’t announced these lower-powered processors for more affordable smartphones. We’d expect to see those soon.

Updated at 7:15 AM with additional details on Quick Charge 5.