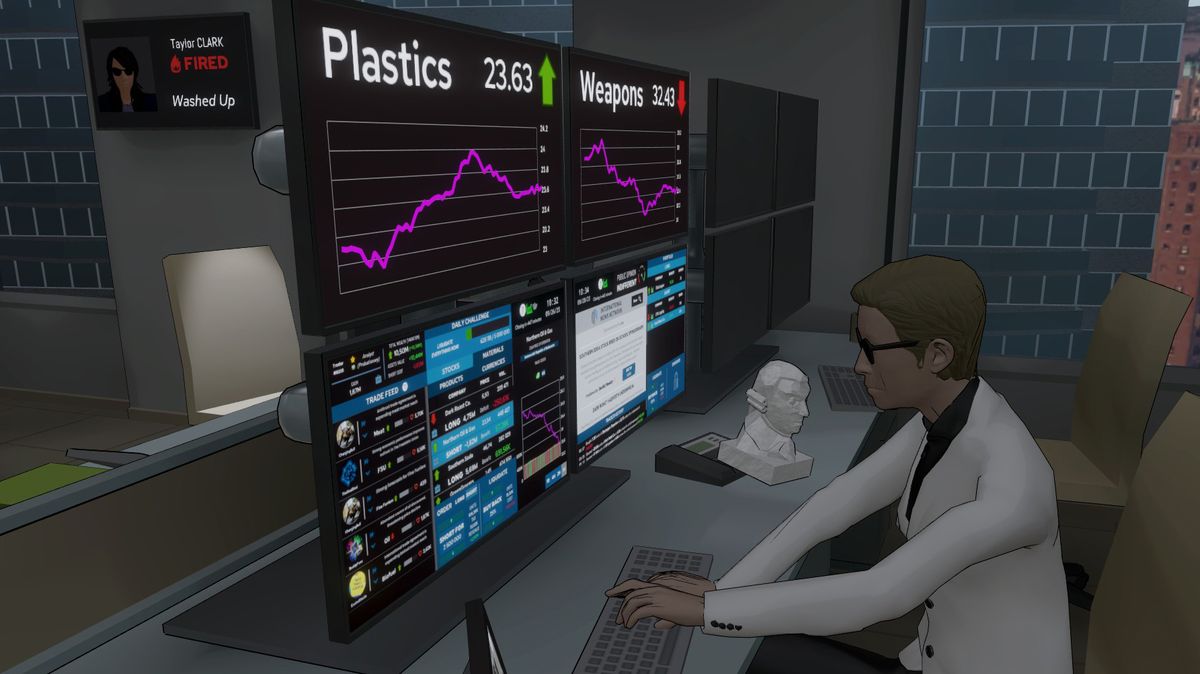 My boss is furious with me. All week long at the stock trading firm I work for, I’ve been illegally paying lobbyists to sink the value of currency in a foreign country, which makes the stock value of that country’s companies plummet. And I’ve shorted those stocks, which means I’ve borrowed and sold them, watched them nosedive, bought the shares back at a bargain when they’ve reached rock bottom, and returned them to the lender. Along the way I’ve made my firm a tidy profit.

It’s important to note that manipulating currencies and plunging companies into ruin isn’t the reason my boss is furious at me. She told me to do it. She taught me to do it. It’s just that I’ve been doing it so much that the public has caught wind and the reputation of our firm is now on the questionable side, so my boss has to spend money on public relations specialists to improve the company’s image.

And that’s what she’s mad about: me putting a strain on the PR budget to cover up my malfeasance. Anything that makes money, even if it’s illegal and immoral, is good. Anything that costs money is bad.

Welcome to The Invisible Hand, a stock trading simulation game where you can go ahead and feed your morals directly into the shredder before you sit down to work. It’s a satirical sim about maximizing profits ahead of all other concerns. And as gross as it sounds, it’s also extremely engrossing. Even making fake millions on a fake stock market is pretty exciting.

There’s a narrative running through The Invisible Hand. You begin as a new hire, given a desk in the trading room, and you’ve also got a competitor, another new employee. You’re given a daily challenge, such as to make a certain amount of profit off a certain type of stock, or to raise or lower the value of a certain material used in a product, which nets you a bonus if you’ve completed it by the end of the day. As for your competition, whoever does best by the end of the week stays and gets promoted. Second prize? You’re fired.

Each day, you come into work and sit down at your workstation, learning more about which stock tips to listen to and which to ignore. Sometimes there are tips you won’t find on the news and social media: illegal insider stock trading tips, for example, accessed on one of your four computer monitors. As the minutes tick by you do your best to buy low and sell high, or borrow high and short sell. If you’ve been caught up in the recent GameStop stock drama, this game is highly relevant to your interests.

Days fly by or drag, usually depending on my stock position. Sometimes it feels like there’s not enough time to get all the trading done I’d like to. Other days I’m not sure which tips to trust, or the market seems too volatile, so I focus on a single stock and it feels like the day is passing slowly. But you can alter time by visiting the coffee and tea dispenser: A strong coffee will speed up the clock, while a tea will slow it down.

And while you’re walking around the office and can hear some small talk from the other traders. Maybe one of them will let something slip that you can use to make some money.

As you make more cash for your firm and yourself, and learn new ways to be a completely immoral and unethical trader, you can start dabbling in real estate, buying condos or houses, decorating them with expensive furniture, leasing them out for profit or throwing massive parties for your coked-up colleagues that may net you a little buff the following day, like a cash bonus or a bit of info about a particular stock. And there’s usually a daily event, too, like the time I came to work to find the office filled with federal agents, or the time activist hackers got into the computer system and changed the names of all the stocks. Water stocks became Thirst. Labor stocks became Exploitation. This is not a subtle game.

But it is a fun one. It’s extremely tense at times, like when I’ve shorted a stock and it’s not plummeting the way I’d hoped and the seconds until market closing are ticking down a bit faster than I’d like. Or when I take a stock tip and buy half a million shares in something that pretty much flatlines a few minutes later. Or when I’ve bent the rules so much our reputation is scandalous and I know my boss is going to scream at me at the end of the day. It can be a nail biting experience, just watching those little lines go up and down, by which I mean illegally making those lines go up and down. Especially when they go up when you desperately need them to go down.

I think I’m doing well, though. I own two mansions (one even has a gold toilet). I haven’t been arrested (yet). I’ve been with the firm for 18 days and was just made Vice President, which means my new weekly competitor is now my boss, my mentor, the person who trained me to do these horrible things all while screaming at me about how horrible I am at doing them.

She’s going to be tough to beat. I think I’m going to have to sell my soul to destroy her, but after a few weeks of being a stock trader there’s very little left of it anyway.