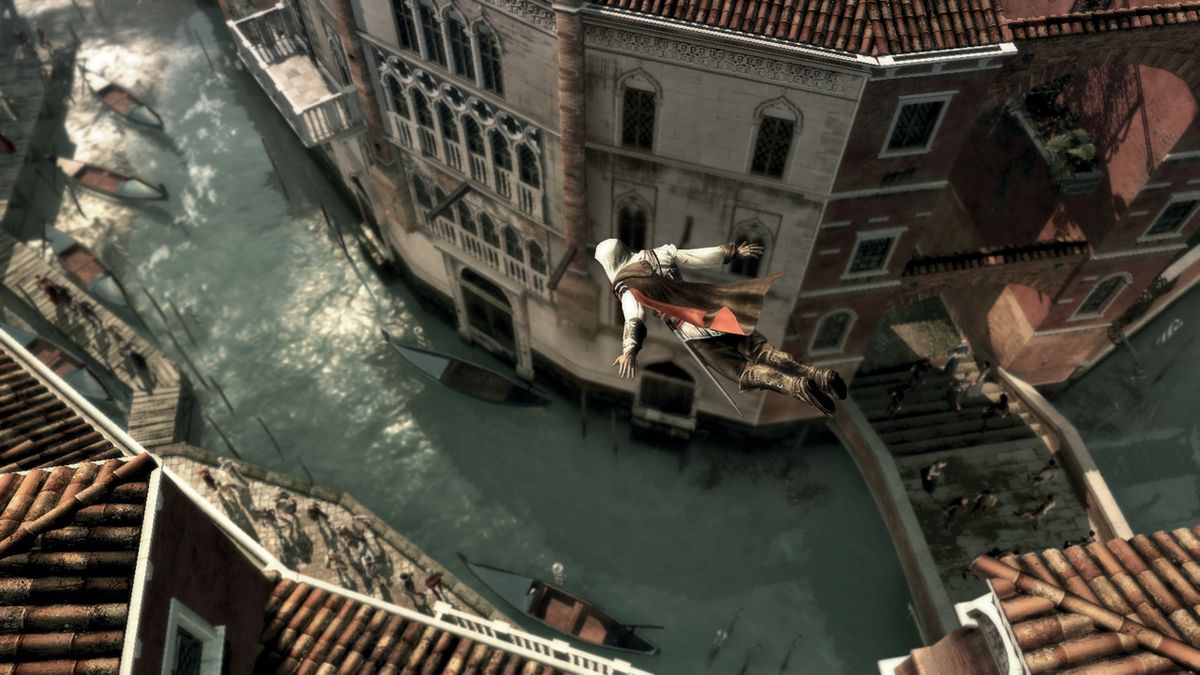 History loomed over the young Patrice Déselets. Aged three or four, he would meet his mother as she came off the boat from the French fort where she worked on the Richelieu River. The Quebec waterway had been a crucial path for French and English armies during the era of European colonisation, and the scene of several bitter battles. But for Désilets, three centuries on, these ruins represented a kind of reverse science fiction.

“The past is like a fantasy land,” he enthuses these days. “It’s so different. Where we are now, it’s as if it’s on a different planet. The 20th century just changed us, totally. But this is where I’m fascinated by us—we think we’re at the end of it. I like to look behind and let a player experience how we were.” It just so happened that, as Désilets finished up the creative direction of Prince of Persia: The Sands of Time many years later, Ubisoft’s marketing team was on the same dusty page.

“I received a mandate back then to do the sequel to Prince of Persia, for the next generation of consoles,” he says. “And I was asked to redefine the action-adventure genre. I remember having a discussion with marketing people, saying ‘OK, we just did a fantasy game, and maybe now the next big thing would be history.'”

Désilets returned to his college books and found a tome on secret societies. There he discovered the myth of the old man on the mountain, and his dreaded sect of assassins (derived from the Arabic ‘hashishin’, incidentally, meaning ‘those who use hashish’). “That’s in Iran,” Désilets realised. “That’s Persia. You could be the prince of the assassins.”

Ultimately, of course, the Prince of Persia license fell away, and the game Désilets and his team made was Assassin’s Creed. One less overt influence on the finished game was GTA. “I guess a lot of games in the beginning of the 2000s were inspired by it,” Désilets says. “Exploring GTA, my pleasure was just to be in this game world and see the sun rise. So it was like ‘Can we replace the car with the main character? In GTA I can go anywhere with the car, can I go anywhere with the character?’ That’s why we had the parkour.”

Ironically, by the time the series reached the colonial era that had so inspired Désilets as a young boy, he was no longer at Ubisoft and found himself unable to appreciate Assassin’s Creed as a player. It felt too much like he was QA testing, rather than having fun. “I haven’t played any of them since the third one,” he says.

What Désilets carried forward from Assassin’s Creed was a fascination with DNA. His games posited that memory was passed down between generations—connecting us to our ancestral past, just as that fort did on the Richelieu River. The idea of DNA as a storage device eventually spawned a whole new game, in the form of Ancestors: The Humankind Odyssey in 2019.

A survival game set across a span of eight million years, Ancestors tasks you with guiding an ape clan from all fours in the African jungle to a bipedal, proto-human existence hunting prey with tools across grasslands. More than any other game in Désilets’ catalogue, it shows the past to be as alien as fantasy—a treetop realm of poisonous foods and oversized snakes.

Ancestors is a harsh teacher, and Désilets believes in the teaching potential of games. “Some teachers get it, and they use play, they don’t fight it,” he says. “This is homo sapiens, this is how we learn, through play. Learning is about trial and error. But it’s not something I think about that much. What I think about is doing a good job with my research and knowing my subject matter, so that if you want to know more about what you just experienced, there is a real thing out there you can go and teach yourself.”

Even now, Désilets encourages his team not to bend reality when the answer to a game design problem might be found in fact. “It’s my 30 seconds Wikipedia rule,” he says. “If information can be found in 30 seconds on Wikipedia, it’s got to be on point.”