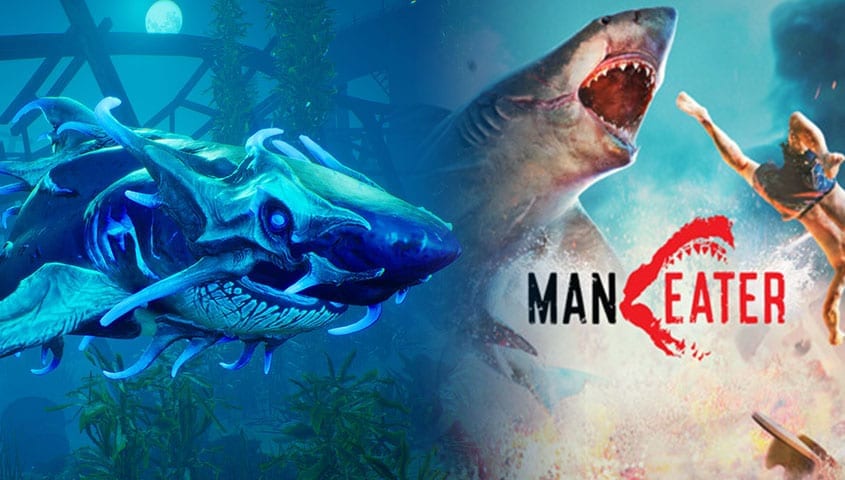 Looking for Maneater tips and tricks when it comes to evolutions? We have you covered! Levelling up and customising your character is a part of what makes an RPG great, but if you’re tired of the tried-and-tested waters of swords, helmets and boots you find in every role-playing game then you might want to strap in for Maneater. Maneater is one of the most ludicrous video games we’ve played in a while, and we can’t get enough of it. It gives players the chance to become the ocean’s most terrifying creature – a giant shark!

Explore and battle in this open-world adventure as you level up and evolve into the biggest predator of the seven seas.

Maneater is now available on PS5 and Xbox Series X|S, making the most of the new consoles to provide the best underwater experience imaginable. With its native 4K and 60 FPS, Maneater brings the oceans to your living room. If you’re looking to dip your toes into the game which is causing ripples in the RPG genre, here’s our guide to the most ridiculous evolutions available in Maneater.

Looking to get a copy of Maneater? The new GameByte Shop has all the greatest games in one easy-to-access place – including the world’s best shaRkPG on all your favourite platforms! Right now you can pick up Maneater on Xbox One, Xbox X|S, PS4 and PS5 – all from the GameByte Shop! Check out the Maneater collection right here and grab yourself one of the wildest games of the year.

Before we get into Maneater’s evolutions, let’s talk a little about the game itself. Maneater made a splash when it launched on last-gen consoles earlier this year, where it quickly amassed thousands of players thanks to its unique premise and fun-as-heck gameplay. In this open-world RPG (sorry, shaRkPG), you take on the role of a shark pup on a quest to become the biggest bad the ocean has ever seen. Eat your way through the ecosystem and evolve to become the best shark to suit your playstyle, all while killing everything you lay eyes on. It’s chaotic combat as its finest, and it’s now landed on PS5!

Maneater aims to give players the freedom to play in the way they most enjoy, and that’s where Evolution Mutations come in. Evolution Mutations allow you to improve your abilities including damage and speed, customising your shark-self into the most deadly predator possible by leaning into your preferred skills as a player.

Evolutions are earned in a variety of different ways, such as completing story events, locating landmarks and defeating predators. Most Evolutions fall into three categories: Bone, Bio-Electric and Shadow, though there’s also an Organ set too.

Now you’ve got a taste for Maneater, let’s dive into the best – and most ridiculous – evolutions!

What’s more deadly than a shark? A shark whose body is made entirely of bone, of course! The Bone Body Evolution Mutation is a must-have if you’re looking to put some power behind your attacks, as it unlocks the Bone Crusher ability. You’ll be imbued with the power to turn boats into dust with this battering ram-like power upgrade, and it looks pretty cool to boot! Upgrade to the Bone Body by defeating the Sapphire Bay Apex Hammerhead Shark.

If you want to strike fear into the hearts of your prey then the Bio-Electric Head will do just that! This shockingly good Evolution Mutation doesn’t just look the part though, as it also packs a pretty savage punch. With the Bio-Electric Head equipped you’ll give off an electric shock every time you ram a boat. Electric and water? Definitely a deadly combination – at least for your foes! Unlock the Bio-Electric Head once you’ve reached Infamy Rank 9 and defeat Commander Percy Metcalf.

Who needs regular fins when you can have SHADOW Fins?! These bad boys are sure to amp up your villainous oceanic takeover, as they don’t just look sinister, but act it too. The fins will release a poison cloud each and every time you evade, giving you more than just an edge in battle. If you prefer to attack without going head-on, this Evolution Mutation is a must-have for your shark. Unlock the Shadow Fins by locating all the landmarks in Golden Shores.

Perhaps one of the most OP Evolution Mutations in the game, the Shadow Tail is an incredibly deadly weapon just waiting to be unleashed upon your underwater world. Whipping your tail with the Shadow Tail equipped will fire off a poison ball with a 30m range, leaving nothing but destruction in its path. A poison gas cloud will also be emitted, targeting all creatures within its radius. Unlock this deadly upgrade by locating all landmarks in Prosperity Sands.

Organ Evolutions are a little bit different to your Evolution Mutations in that you can equip them to boost and improve your stats in a more tailored way. Think of your Organ Evolutions as the Maneater equivalent of your RPG weapon upgrade slots and you’ll understand just how instrumental Organs are. Here’s just three perks which you won’t want to sleep on.

Increase your resistance to damage? Who wouldn’t want that! Reinforced Cartilage is a must-have Organ Evolution if you’re looking to become the ocean’s most powerful predator, and it’ll not only help you conserve health, but also give you an edge in combat. Unlock it by locating all landmarks in The Gulf.

Finally we have one perk we’d never say no to – a swim speed increase! Brutal Muscles allows you to move faster through the water, but it also works great with a number of the tail Evolution Mutations, as it increases the damage of your tail whip. A must-have if your playstyle is more “evade” than “collide,” Brutal Muscles can be obtained by reaching Infamy Rank 10 and defeating Captain Robert Brunlett.

So there you have it, the most ridiculous – and incredible – evolutions awaiting you in Maneater. Taking full advantage of everything the PS5 has to offer (including the haptic technology of the DualSense controller), Maneater has never looked – or felt – this good! Enjoy native 4K HDR support at a silky smooth 60 FPS and lush new lighting effects whether you’re playing on PS5 or Xbox Series X!

Experience the evolutions for yourself and pick up your copy of Maneater from the GameByte Shop on PS5, PS4, Xbox One and Xbox Series X|S today! (Please note the GameByte Shop is available for UK residents only).

Part of a paid partnership between GameByte and Tripwire Interactive.