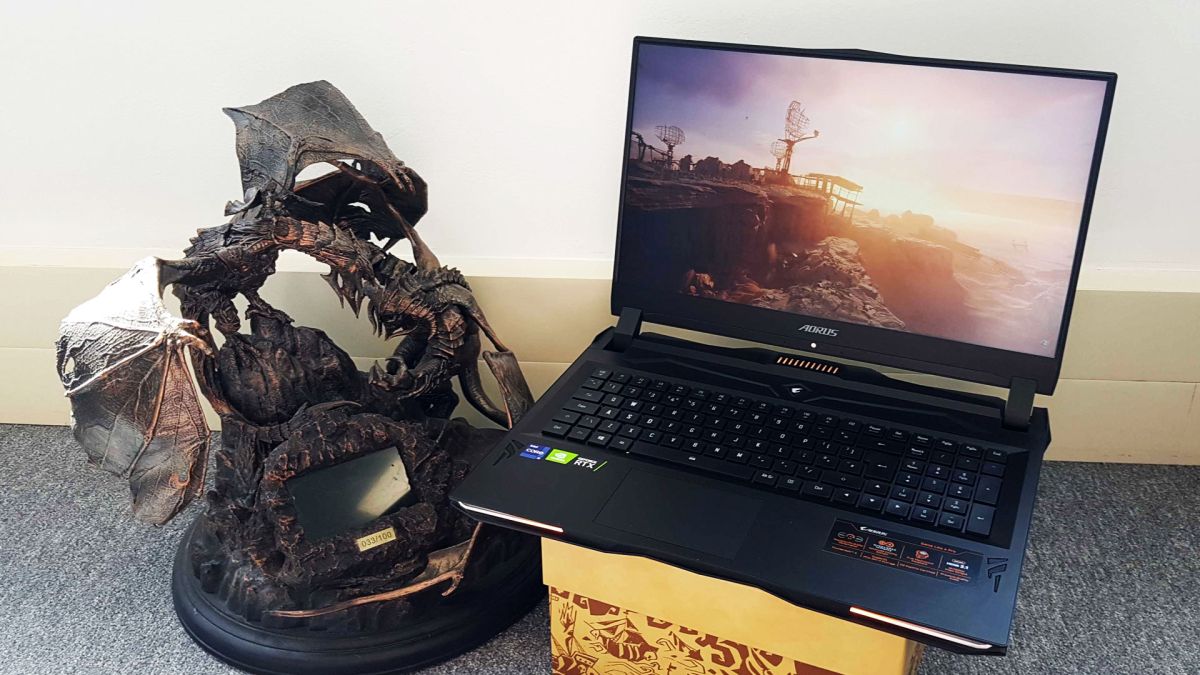 The immense hardware combination packed into the Gigabyte Aorus 17X YD makes it the most powerful we’ve reviewed to date. Not only are we looking at a whopping 165W mobile variant of the Nvidia RTX 3080 16GB GPU, but a Core i9 11980HK processor also backs it up. With this 8-core, 16-thread monster CPU that tops out at 5GHz, and a GPU with enough wellie to ace even the likes of Metro Exodus with RTX on, this flagship 30-series-powered Aorus 17X kicks some serious butt.

The closest we’ve tested in terms of raw power is the Asus ROG Flow X13 with its external 150W RTX 3080 8GB eGPU. The Ryzen 9 5980HS in that machine trumps this machine when it comes to CPU encoding (see X264 graph) and CPU rendering (Cinebench graph)—let’s face it, the red team knows how to make a processor sing—but the Aorus utterly owns it in gaming performance. Gigabyte has managed to imbue this bad boy with heaps of gaming potential with no external GPU necessary.

Of course, there are some drawbacks to jamming this much power inside a laptop. A lot of the time, this translates to bad heat dissipation, though this machine’s top CPU temps stayed below 92°C (198°F), with the GPU temp topping out at just 72°C (162°F). Safe to say the Windforce Infinity cooling is doing the trick, then. The real problem with the Aorus 17X is its portability—this laptop is weighty.

Ok, so the Aorus 17X YD doesn’t need two power adapters to work to its full potential, unlike the Aorus 17X YB model. It is actually 7 ounces lighter than its little sister at 8lbs—that’s without the cable—but it’s still a hefty machine. Gigabyte does have a habit of stretching the meaning of the word laptop; evidently, it wasn’t going for portability, as what we have here is yet another muscle-class, desktop replacement, with more brawn and gusto than a Toreador, and an equal dose of eccentric style.

To complement its tenacious performance, the Aorus 17X’s chassis is appropriately flamboyant. It’s sharp, dark, and adorned with the gorgeous Aorus phoenix motif on the bottom, should you ever muster the strength to flip the thing over. It’s a little edgy, so if you’re looking to do some covert gaming, this is not the machine for you. Even the sound of the keyboard is a dead giveaway.

A gorgeous, full-sized, low-profile Omron Mechanical Keyboard sits beneath the lid, with N-Key Rollover to thrill your fingertips. The keys are also just sturdy enough to prevent accidental presses when resting, and full key travel is just 2.5mm, so you can imagine how swift the actuation is. And of course, no keyboard is complete without completely customizable, per-key RGB LEDs. Unicorn vomit, here we come.

With the Aorus 17X YD, Gigabyte has implemented its Control Center software which, while it’s great for editing lighting, tuning fan speeds, and toggling settings, the AI profile switch feature is a bit of a hassle. It cleverly switches profiles as you move between programs, and sure, it’s optimizing the system for the intended task. Still, the little notification in the corner can get annoying if you have a lot going on. It also has a habit of turning itself back on once you hit restart. I’d recommend at least turning push notifications off.

I turned off the automatic AI profile switch for these benchmarks and left it in standard gaming mode, with Nvidia Dynamic Boost enabled. And even without the use of Turbo mode, the Aorus 17X aced all the gaming benchmarks I threw at it, no issue.

Having just a native 1080p panel attached, the 17X has no problem reaching framerates well into the hundreds in a host of AAA games. I’m convinced it could handle top games even with a 1440p or even a 4K external monitor plugged in, although keep in mind there’s only an HDMI 2.1 port, no DisplayPort. Kinda something I’d expect from a machine at the top of its class.

Still, if you’re happy sitting at FHD, the IPS screen does pack a punch with its 300Hz refresh rate. Should you manage to push your framerates up to a level at which you can appreciate it (totally possible with lower resolutions and/or less graphically intensive games), that’s a very sweet, speedy screen to see you through.

Speaking of speed, the configuration I tested had few issues when it came to loading times. FFXIV Shadowbringers loaded in just over 10 seconds, a full two seconds faster than the closest we’ve tested. And this config also came backed with 64GB DDR4 RAM. That’s the maximum available and is more than enough for quick access to all that juicy cached info.

And while you swiftly jump between programs and load your games in the blink of an eye, you can be listening to bass-filled music at full blast with the rather sensual ESS Sabre HiFi Audio. Its 2W Speakers are complemented by a 3W Subwoofer that really does have some kick when it resonates across the tabletop. Gigabyte doesn’t skimp on sound quality, that’s for sure.

There’s one issue, other than weight, with having so much awesome tech packed into a small space: battery life. We’ve still not entered the age where we can do away with power leads for more than a couple of hours, tops. The Aorus 17X only managed one and a half hours in gaming battery life tests. However, that was with the AI battery saver off because that mode did not benefit performance.

To reiterate, this is not a machine for everyday use. It’s a seriously beastly machine that can bash out hundreds of frames per second in a host of graphically intense games, but only for those who want to move short distances with it (likely from one room in the house to another, preferably with a table). At £3,999 (awaiting U.S. pricing), it’s a big investment, so you really have to be committed to using it as your main gaming machine. But you won’t be disappointed if you do—just don’t expect to be going anywhere without a power cable.