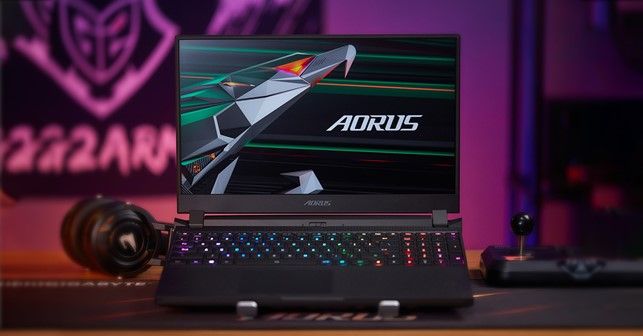 The new Gigabyte G5 and G7 are the company’s latest budget-friendly offerings for mainstream buyers. Both models are packing Intel’s 11th Gen Core processors, the eight-core i7-11800H or the hexa-core Core i5-11400H based on the Tiger Lake architecture. The G5 and G7 also use Nvidia’s newly released RTX 3050 and RTX 3050 Ti mobile GPUs.

Both notebooks feature dual DDR4-3200 slots supporting a max of 64GB (32GB per DIMM), and dual M.2 slots supporting PCIe with one allowing up to Gen 3 speeds and the other up to Gen 4. Plus, you get one 2.5-inch HDD/SSD slot that supports 7mm (or thinner) SATA drives.

The main difference between the G5 and the G7 is display size. The G5 is a 15-inch notebook while the G7 comes in a larger 17-inch form factor. Despite the changes in size, both laptops will come with the same panel specs, with a 1080p display at 144 Hz.

For connectivity the G5 and G7 come with four USB ports of different variations: You get a single USB 2.0 Type-A, dual USB 3.2 Gen 2 ports with one being type-C, and finally a USB 3.2 Gen 1 type A port.

For wireless connectivity, the G5 and G7 come with Intel’s AX200 or AX201 wireless cards which both support WiFi 6 and Bluetooth 5.2. For storage and memory, you get dual M.2 slots with one supporting Gen 3 speeds and the other supporting Gen 4.

Gigabyte is also updating its Aero line of laptops, which are targeted towards creators and gamers alike. Gigabyte is adding two upgraded models to the Aero lineup, the Aero 15 OLED and the Aero 17 HDR with new CPUs.

The main differences between the 15 and 17 will be its size and display type (as the name implies), the Aero 15 will come with a Samsung AMOLED display so you get those very crisply visuals and stunning visuals. Unfortunately, you will not be able to get an AMOLED display for the Aero 17, so Gigabyte has opted for a 4k HDR display instead.

The upgrade you’re getting on the new refreshed Aero 15 and 17 are the CPUs; both the OLED and HDR variants get upgraded to Intel’s 11th Gen Tiger Lake CPUs, specifically the i9-11980HK or the i7-11800H. Giving these laptops a big performance and efficiency boost over previous Comet Lake mobile CPUs.

Gigabyte is also refreshing the Aorus 17X, the companies flagship gaming laptop with a 17.3 display and a thick chassis with vapor chamber cooling to cool Nvidia and Intel’s top tier CPUs and GPUs.

The 17X will come with Intel’s highest-end mobile processor you can get, the i9-11980HK with 8 cores and a max turbo frequency of 5GHz. The chip has a configurable TDP up to 65W. What we don’t know is how Gigabyte configured the TDP for the Aorus 17X.

For graphics, the Aorus 17X will come with an RTX 3080, with a whopping 165W of target graphics power.

This flagship device includes some other top-end specifications, including a 300 Hz display and a mechanical keyboard with Omron gaming switches and RGB backlighting.