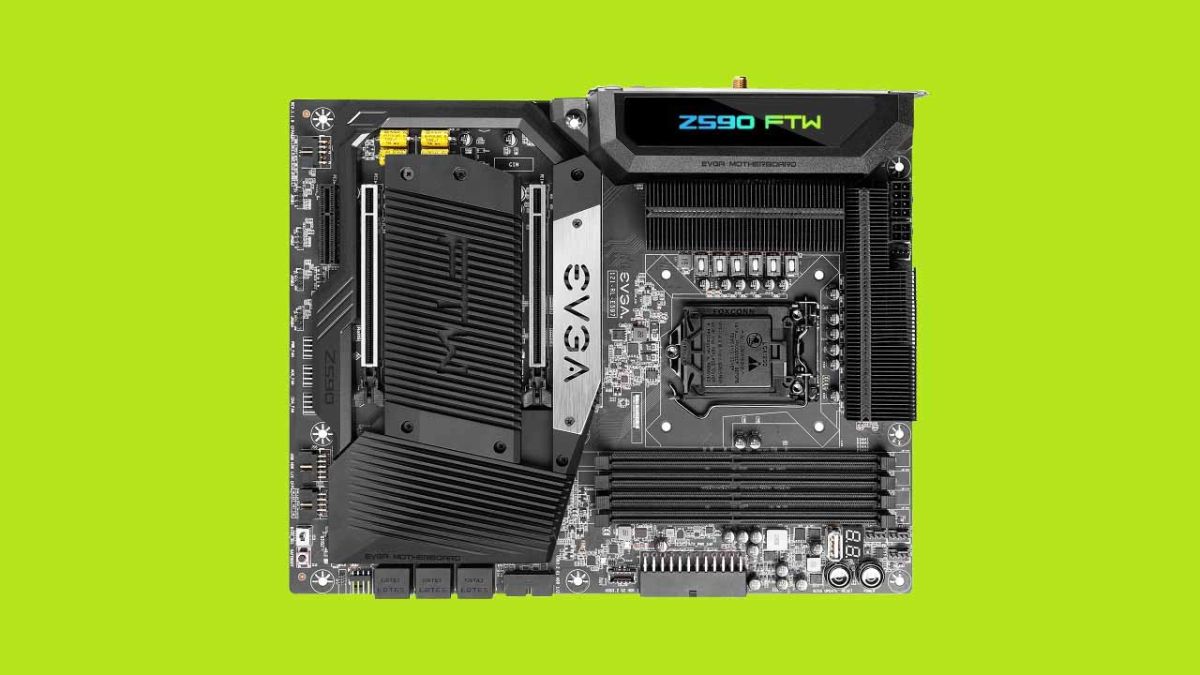 Components
June 20, 2021June 21, 2021 admin 0 Comments EVGA, Motherboard, tech, WIFI, Z590
The first Z590 board from EVGA to land on our test bench is the Z590 FTW WIFI. The latest iteration improves upon the last generation in many ways, including native PCIe 4.0 support (with a Rocket Lake CPU), upgraded power delivery and an improved appearance, for $429.99. The FTW WIFI brings a well-equipped Z590-based board to the premium segment.

EVGA’s motherboard lineup for Z590 consists of two boards, the Z590 FTW WIFI and the flagship Z590 Dark. I do miss the ITX-based Stinger motherboard from a few generations back. It would be a good SKU to have, considering most partners offer at least one ITX option. We can’t say there is something here for everyone (no mATX either). However, EVGA brings quality motherboards to the table in what they do have.

On the performance front, the EVGA Z590 FTW WIFI and its out-of-the-box settings were, on average, slower than the other results. In gaming, however, it performed well, matching the other boards. In the end, our CPU reached 5.1 GHz around 1.35V, and our RAM was running at DDR4 4000. Note, though, that the RAM defaults to 1:2 using our DDR4 3600 kit. But switching to 1:1 was just a BIOS setting — no other tweaks were needed.
Overall, I like how the FTW looks have changed over the last generation. Although I tend to equate EVGA boards more as a ‘benchmarking’ motherboard (function over form), the company has done an excellent job adding some aesthetic improvements to the bottom half of the board, as well as changing up the RGB element. The Z590 FTW comes with 1 GbE and Intel-based Wi-Fi 6, a premium (though last-generation)  Realtek audio codec, three M.2 sockets and robust power delivery. We’ll cover those features and more below. First, here are the full specifications from EVGA.

Along with the motherboard, the box includes the basics, but enough to get you started. Below is a complete list of all included extras. Including a USB stick for drivers instead of a CD is a nice touch, which we wish were more common.

After removing the board from the retail packaging, we’re greeted by much-improved aesthetics. The familiar all-black PCB gives way to black heatsinks and shrouds in critical locations. The VRM heatsink uses a finned setup, with a heatpipe to share the load between the two fin arrays. Around the PCIe area is a ribbed heatsink with ‘FTW’ cut out covering the two M.2 sockets and the chipset.

As far as RGB lighting, the FTW WIFI goes minimal again, with only the “Z590 FTW” on the IO cover lit up. The board also includes four total RGB headers (two RGB, two ARGB) at the bottom of the board if this isn’t enough for your needs. Overall I like the visual improvements. EVGA went from a purpose-built performer look on Z490 (and before) to one that looks good too, in the Z590 version.

Focusing on the top half of the board, we get a closer look at the plastic IO cover that contains the RGB lighting. A simple frosted cover lets the saturated but not terribly bright RGB elements shine through. To the right are two EPS power connectors: An 8-pin (required) and 4-pin (optional) feeds the CPU. Just to the right of that is the first (of eight) fan headers. Seven support up to 2A/24W of power, while the Pump header is 3A/36W. This should be plenty of power to support your fans and water cooling endeavors. The finned VRM heatsinks do an excellent job at keeping temperatures in order and look good in the process.

Just to the right of the socket area are four DRAM slots. The Z590 FTW supports 128 GB of RAM, with speeds listed up to DDR4 5100+(OC). As always, your mileage may vary in reaching those speeds as it depends on the CPU’s ability and the kit you choose.

Continuing right, there’s quite a bit going on this part of the board. There are three additional 4-pin fan headers, the debug LED for troubleshooting POST issues and a handy USB BIOS update port. Additionally, there are two buttons here: one for power on/off, the other for resetting the system. The last two features are great for those who use the board on an open chassis. There’s also a vertically oriented USB port that means you don’t have to reach around the back to the rear IO area to plug in a USB stick. For the extreme overclocker or someone who uses an open chassis, this is an excellent value add.

Moving to the right edge you’ll find the 24-pin ATX connector, which is oriented 90 degrees from the standard orientation, in typical EVGA fashion. This allows for a cleaner look, as the thick ATX cable wouldn’t stick straight up as it does on most other motherboards. Finally, just below the ATX connector is the front panel USB 3.2 Gen2 port.

The EVGA Z590 FTW WIFI uses a 17-phase power delivery system, in what looks to be a 14+2+1 configuration. For the CPU, power is fed from the 8-pin EPS connector(s) and sent to a Renesas ISL69269 (X+Y+Z=12) controller. Next, the controller sends power to a set of phase doublers, then on to 90A Renesas ISL99390 Smart Power Stages (SPS). The 1,260A available is more than you’ll ever need for ambient overclocking and is easily capable of extreme (read: sub-ambient) overclocking too.

Looking at the bottom half of the board, this is where we saw the most significant difference in appearance from the last-gen FTW WIFI. Z590 adds a bit of eye candy, with large heatsinks covering up the M.2 sockets and chipset. On the left, hidden under a shroud, is the Realtek ALC1220 codec and four large Rennic audio capacitors. Although the last-gen audio solution will be satisfactory for all but the most critical of listeners, I still would like to have seen the 4000 series codec used.

In the middle of the board we find three PCIe slots (two full-length, one x4) and three M.2 sockets, which is typical for this class of board. Starting with the PCIe slots, both full-length slots are CPU connected and support PCIe 4.0 using a Rocket Lakeprocessor. The top slot is wired for x16, while the bottom is a maximum of x8. With both slots occupied, it breaks down to x8/x8. This configuration supports Nvidia 2-Way SLI and AMD 2-Way Crossfire. The bottom slot runs PCIe 3.0 x1 speeds and connects through the chipset.

On the M.2 storage front, the EVGA sports three sockets. The top is PCIe 4.0 x4 and the bottom two are PCIe 3.0 x4. The top socket supports PCIe-based drives up to 110mm, while the bottom sockets support up to 80mm modules. The middle M.2 supports both PCIe- and SATA-based modules, while the bottom is PCIe only. The manual doesn’t mention any lane sharing between the SATA ports and M.2, although it’s not clear that there isn’t any.

As we continue right, we go over the chipset heatsink and end up at the right edge. Here we have a 90 degree USB 3.2 Gen 1 header and six SATA ports.

Across the bottom of the board are several headers, including additional USB, RGB, fan headers and more. Below is the complete list, from left to right:

On the rear IO area, there’s another pre-installed IO plate that matches the black theme of the board. In total, there are seven USB ports. From left to right are two USB 3.2 Gen1 ports, four USB 3.2 Gen2 ports (all Type-A), and a single USB 3.2 Gen2x2 Type-C port. For video, the FTW WIFI contains a DisplayPort (v1.4) port and HDMI (v2.0). Above a set of USB 3.2 Gen2 ports is the Intel 2.5 GbE port, and next to it is the Intel Integrated Wi-Fi module. The audio stack consists of five analog ports and a single SPDIF port. Other than that, there’s a handy reset CMOS button and a legacy PS/2 port for mouse/keyboard. Our only concern here is that seven USB ports may be too few for some users.

MORE: How To Choose A Motherboard