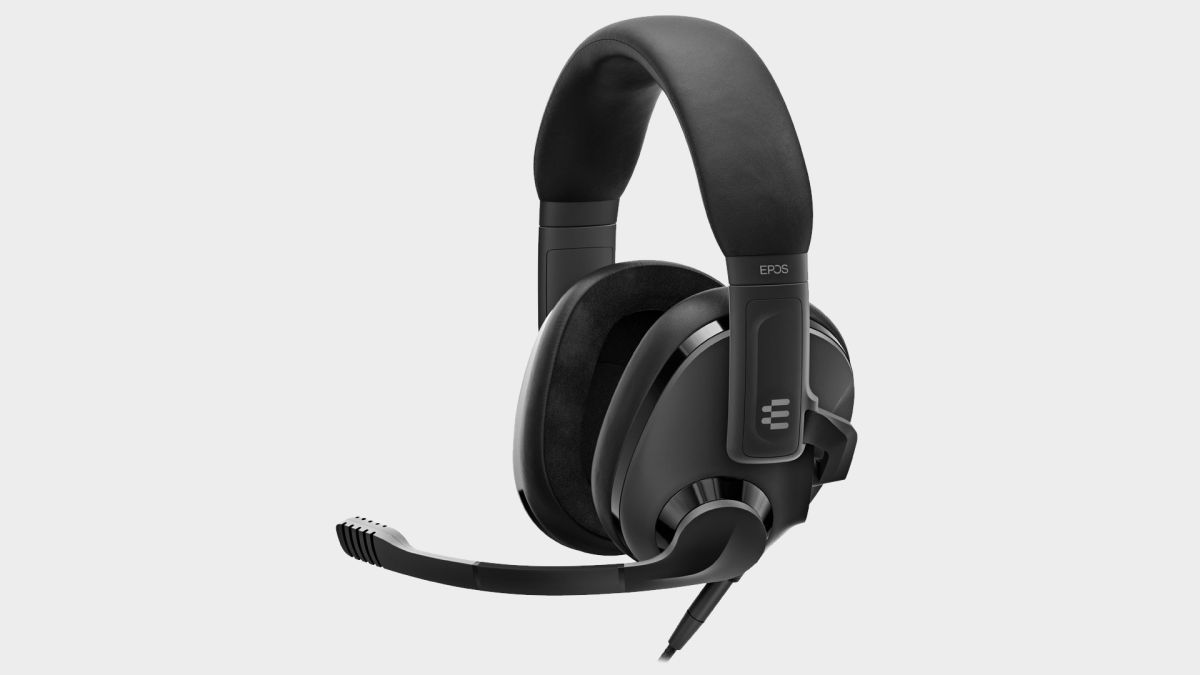 The EPOS H3 is the first in a new line of headsets introduced since Sennheiser span-off the gaming audio division last year. The $120 EPOS H3 is a multiplatform wired headset that replaces the old Sennheiser GSP 300 series and the family resemblance is unmistakable. EPOS has taken the giant, air-traffic controller GSP 300 to the gym and what has emerged is a leaner, lighter, and cleaner beast.

In fact, the H3 is 20g lighter than the GSP 300, which is immediately noticeable, and the leaner design makes the H3 feel far less bulky to wear; thank you very much. The biggest change between the two models though is the headband design. Gone is the chunky, military-grade headband of the GSP 300 to be replaced with a more traditional leather band with a memory foam cushion.

A slight indent in the middle reduces pressure on the top of your head which I appreciated in my use. Adjusting the headband is via stainless steel sliders which have length indicators to give you precise fitting. My sample is the Onyx black one though I can’t deny the Ghost White EPOS H3 looks really appealing as well.

The ear cups also employ leather and memory foam and have a limited swivel that allows for a light touch on the ears. They are angled to conform to the natural shape of the human ear but were a little too small for my ears—causing pressure on the outer edges which made them uncomfortable fairly quickly. I don’t have Dumbo ears by any means but I noticed the same problem with GSP 370 wireless cans. However, I suspect those with smaller ears will find these very comfortable.

Being a wired headset removes the need for controls but there is a volume dial on the right ear cup. EPOS dropped the trusty, tactile knob of old for a rotating disc design that’s fiddly to use. It’s quite stiff to turn especially with one finger but using two is definitely easier. And speaking of wires, the H3 comes with two braided cables – one single line for controllers, smartphones, and laptops and a dual line for PCs and Amps. It tangles absurdly easily and it’s rather noisy especially in the left ear cup.

On the left ear cup is a newer, slimmer boom arm microphone that’s now bi-directional instead of uni-directional like the older headsets. This allows for more focused voice pickup. The mic is also more pliable, making it easy to adjust to your liking. EPOS maintained the same flip-to-mute design although I feel the activation point is much higher in the travel than it used to be. But you still get the audible click to let you know when it’s reached that point.

In terms of mic quality, the GSP microphones have always been pretty good and the EPOS H3 continues to impress here. The audio is very clean, with my voice sounding quite natural and uncompressed. Video calls were all very crisp with no complaints from my colleagues about crackling or fading. There’s no sidetone to allow you to hear yourself which would be handy when in party chat. There’s also no gain control or noise cancellation but for a plug-n-play headset, it gets the job done very well.

Now, when it comes to gaming and music, this is where the H3’s truly show off their Sennheiser DNA. With an impressive frequency response of 10Hz-30,000Hz, they sound great across the board with powerful bass that never spoils the mids and highs. I was particularly impressed by the staging, clarity, and detail in the audio.

Hearing footsteps and accurately positioning enemies in Apex Legends; clearly distinguishing between one opponent or a whole team. In Resident Evil Village, the atmosphere is palpably thick with tension as doors creak, water drips, and wind rustles the grass making for a hold-your-breath experience. The H3’s do a fantastic job at immersing you in any game.

The H3’s also work excellently with amps like EPOS’s own GSX 300 or virtual software amps like Dolby Atmos. I used Dolby on Windows 10 and Xbox and the sound was rich, detailed, and immersive. This trend continued when listening to music which is where a lot of gaming headsets trip all over themselves. The H3’s are a joy to listen to music, be it bass-thumping hip-hop or angelic choral music.

Overall, at $120, the H3 isn’t exactly cheap for a wired headset especially when you have cans like the phenomenal Razer Blackshark V2 that cost $20 less, which is heading up our best gaming headset guide. Sure, the H3 sounds fantastic, the microphone is solid, and it works with literally anything that has a 3.5mm port but is the EPOS tax really worth the extra?