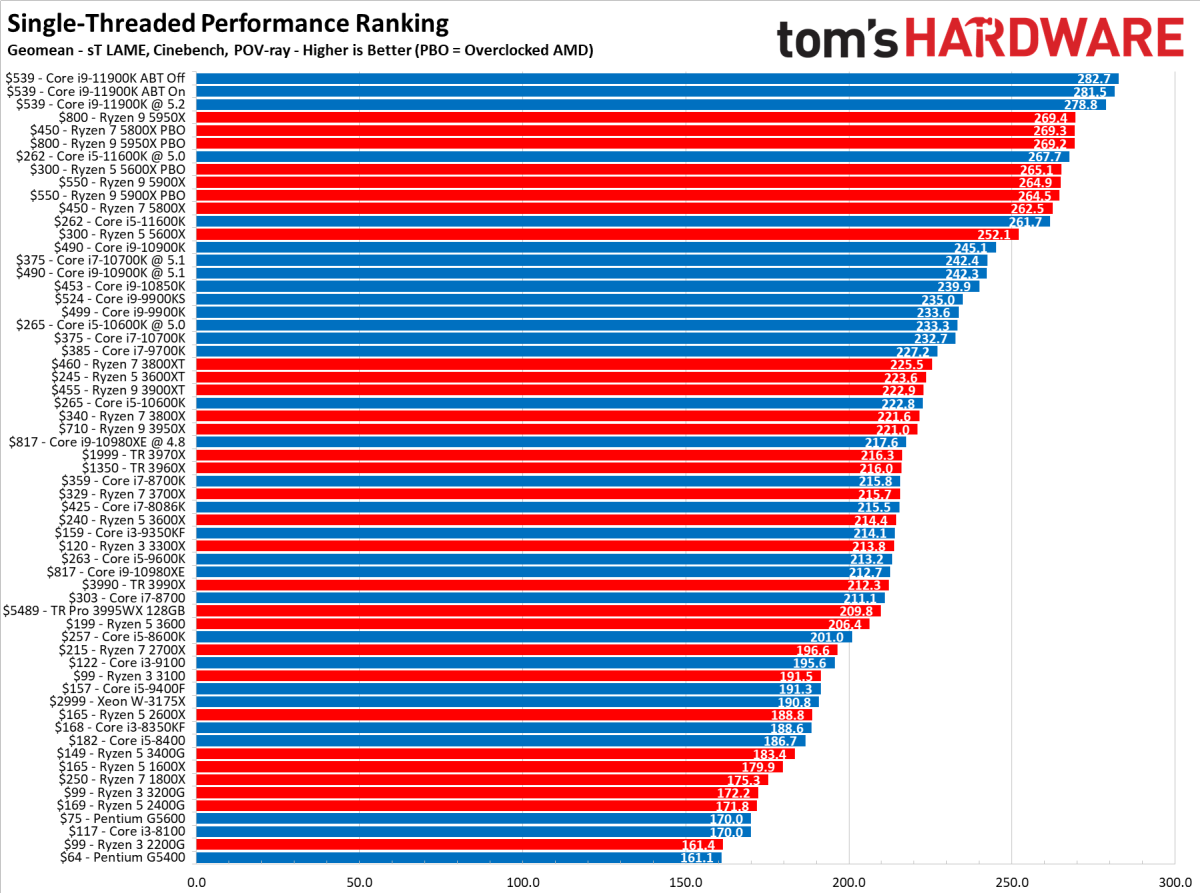 Our CPU benchmarks performance hierarchy ranks all the current and previous generation Intel and AMD processors, including all of the Best CPUs for Gaming, based on performance. Your CPU has a huge effect on overall performance and, to many, is a computer’s most important component. CPU benchmarks help us suss out the differences, but when it comes time to buy a CPU for your desktop, you’ll find a dizzying collection of model numbers and specs from both Intel and AMD.

We’ve listed the best CPUs for gaming and best processors for workstations in other articles, but if you want to know how each chip stacks up against all the others and how we come to our decisions, this CPU benchmarks hierarchy is for you. We also recently added a new article covering the CPU benchmarks hierarchy for Cyberpunk 2077, a dedicated piece to show performance scaling in the most hotly-anticipated game in recent history.

The world of chips, and our resulting CPU benchmarks, is changing quickly. At launch, AMD’s Ryzen 5000 processors represented a watershed moment: The company swept our CPU benchmarks hierarchy and took the lead in every metric, including our gaming, single-threaded, and multi-threaded categories. You can see the Ryzen 5 5600X, Ryzen 9 5950X, 5900X, and Ryzen 7 5800X in our rankings, along with all of the previous-gen Zen 3, Zen+, and Zen 1 versions of those chips.

Intel fired back, though, with its 11th-generation Rocket Lake-S CPUs. We recently finished our in-depth look at the Core i5-11400, and this is the hidden star of Intel’s new lineup. AMD has no response for this chip on the lower-end of its price range – in fact, the Core i5-11400 grapples with the two-year-old Ryzen 5 3600. As a result, the Core i5-11400 takes the top spot in its bracket easily, offering a great deal of value. It also scores a spot on our list of best GPUs for gaming.

We have the full details of the flaghsip models in our Intel Core i9-11900K and Core i5-11600K review, but Intel has improved its competitive standing tremendously. The Core i9-11900K now vies for CPU gaming benchmark supremacy with the best Ryzen chips, though it does still trail slightly at 1080p while taking a slight lead in 1440p gaming. However, the performance delta is slim enough that most gamers won’t notice, particularly if they use mainstream GPUs or game at higher resolutions. You can see the 11900K square off with the 5900X in our faceoff.

Meanwhile, the six-core twelve-thread Core i5-11600K lands at $262, making it much more competitive with AMD’s $300 Ryzen 5 5600X that currently sells far over suggested pricing due to shortages. The Core i5-11600K has a very competitive price-to-performance ratio compared to the $300 Ryzen 5 5600X in a broad swath of games and applications, and it’s a solid generational advance over the Core i5-10600K.

While the Core i5-11600K may not claim outright supremacy in all benchmarks, its mixture of price and performance makes it a solid buy if you’re willing to overlook the higher power consumption. The 11600K actually serves up quite a bit of performance for a ~$262 chip, and the graphics-less 11600KF is a steal if you can find it anywhere near the $237 tray pricing. As a result of its solid performance and AMD’s continued chip shortages, the Core i5-11600K is now our Best CPU for gaming.

We have the Rocket Lake and Comet Lake lineup in our charts, and we also recently added the 9th-Gen and 8th-Gen Intel processors. Well, at least the models we have on hand.

We’ll explain how we ranked the processors under each table. The game testing ranking is first. We also include an application performance metric in our application score tables, which we’ve split up into single- and multi-threaded measurements (below gaming table). The most powerful chip gets a 100, and all others are scored relative to it. If you want our recommendations for specific price bands, please check out our Best CPUs for gaming page.

We rank all the Intel and AMD processors in the tables below, but we don’t include overclocked performance or 99th percentile fps rankings. You can see all of those numbers in the charts above. Bear in mind that the charts above use the raw performance numbers, whereas our CPU benchmarks rankings below use a score to rank the chips relative to one another. Admittedly, the charts are getting a bit packed as we expand our rankings pool, but we’ll work to separate this out into different classes as our CPU benchmarks database grows.

This group of results also comprises only the chips that have passed through our newest test suite. Finally, the pricing in the charts above represents MSRPs. Given the current state of chip shortages, you likely won’t find many of these chips at these prices at retail.

*indicates an APU tested with a discrete GPU. Note: These types of processors are geared for performance with integrated graphics – please see individual reviews for those performance rankings.

We’ve ranked all the consumer Intel 11th, 10th, 9th, 8th, and 7th Gen processors, along with AMD’s Ryzen and Threadripper chips from all four generations. We have two rankings for each chip, based on 1080p and 1440p CPU gaming benchmarks, but the chart is aligned sequentially based on the 1080p game results. The 1440p listings aren’t listed in sequential order due to the unfortunate limitations with our tables. Pay attention to the 1440p rankings: Some faster chips at 1440p CPU benchmarks may be listed below slower chips simply because of the 1080p results.

As you can see, AMD’s Ryzen 9 5950X and Ryzen 9 5900X take the slimmest of leads over Intel’s flagship Core i9-11900K in 1080p, but the Core i9-11900K takes the lead at 11440p, meaning these chips are very closely matched. Also, check out those CPU benchmarks performance deltas between the previous-gen Ryzen processors and the 5000 series, and between the 10th-Gen Comet Lake and 11th-Gen Rocket Lake. That’s impressive and comes as the byproduct of a heated competition for gaming supremacy. Enthusiasts are surely benefiting.

Most folks overlook the incredible power efficiency of the Zen 3 processors, but that equates to a faster, cooler, and quieter system that doesn’t require super-expensive cooling solutions. Take note of the TDP divide in our charts – it’s surprising. Check out our review for more in-depth power testing.

We calculate the above single-threaded CPU benchmarks rankings based on a geometric mean of Cinebench, POV-Ray, and LAME. The latter consists of two tests: One short duration test and one extended-duration test to measure performance once Intel’s boost duration limits have been exceeded.

Single-threaded performance is often tied directly to the responsiveness and snappiness of your PC in any number of daily applications, like loading an operating system or surfing the web. This metric largely depends upon a mixture of instruction per cycle (IPC) throughput (the number of operations the chip can execute in one clock cycle) and frequency, which is the speed at which the transistors switch between on and off states.

However, a whole host of other considerations, such as cache, architecture, and interconnects (like rings, meshes, and infinity fabric) impact this measure of per-core performance, so these results do not align perfectly based upon clock frequency. Instead, performance varies with each application and how well it is tuned for the respective architectures.

With all that said, the CPU benchmarks delta between Intel’s flagship Core i9-10900K and the Ryzen 5000 processors was incredible – at worst, Ryzen 5000 was 10% faster in single-threaded performance. The paradigm has changed, though, as the Core i9-11900K takes a convincing 5% lead over AMD’s Ryzen 9 5950X to take the lead in our single-threaded hierarchy. Rocket Lake’s Cypress Cove architecture has proven to be beastly in single-threaded work, but we don’t see those same gains translate over to gaming performance.

Be aware that architectures, caches, and interconnects profoundly impact these results, as all of these factors impact how well performance scales with additional threads. Performance rarely scales perfectly with the addition of more cores/threads, so the scaling factor of each processor architecture weighs in heavily on the value proposition of going with a higher core count processor.

Intel’s Rocket Lake chips weigh in with a slight generational gain with the Core i9-11900K over the previous-gen Core i9-10900K, but we’re looking at a ~3% gain. That is impressive given that the 11900K comes with two fewer cores, but it doesn’t do much to change the CPU benchmark pecking order relative to AMD’s Ryzen 5000 chips. The Core i5-11600K is a solid chip, though: It boosts multi-threaded performance by 6% over its predecessor, the Core i5-10600K.

Recognizing that a lot of older platforms are going to be paired with graphics subsystems multiple generations old, we wanted to define the top of our range to encourage balance between host processing and complementary GPUs. At this point, anyone with a Sandy Bridge-based Core i7 would realize a gain from stepping up to Coffee Lake or Kaby Lake, for example. And putting AMD’s top FX CPUs next to a handful of Core i7s and those older Core i5s represents an upgrade to their status.

Currently, our hierarchy consists of 13 total tiers. The bottom half of the chart is largely outdated; you’ll notice those CPUs dragging down performance in the latest games, regardless of the graphics card installed in your PC. If you own a CPU in that range, an upgrade could really take your experience to another level.

Really, it’s the top five tiers or so that remain viable. And in that top half of the chart, an upgrade is typically worthwhile if it’s a least a couple of tiers higher. Otherwise, there’s just not enough improvement to warrant the expense of a fresh CPU, motherboard and RAM (not to mention the graphics card and storage solution you’d be considering as well).

Finding Deals on the Best CPUs

Whether you’re shopping for a processor that’s on our list of best CPUS or one that didn’t quite make the cut, you may find savings by checking our list of coupon codes, especially our lists of Newegg promo codes and Micro Center coupons.