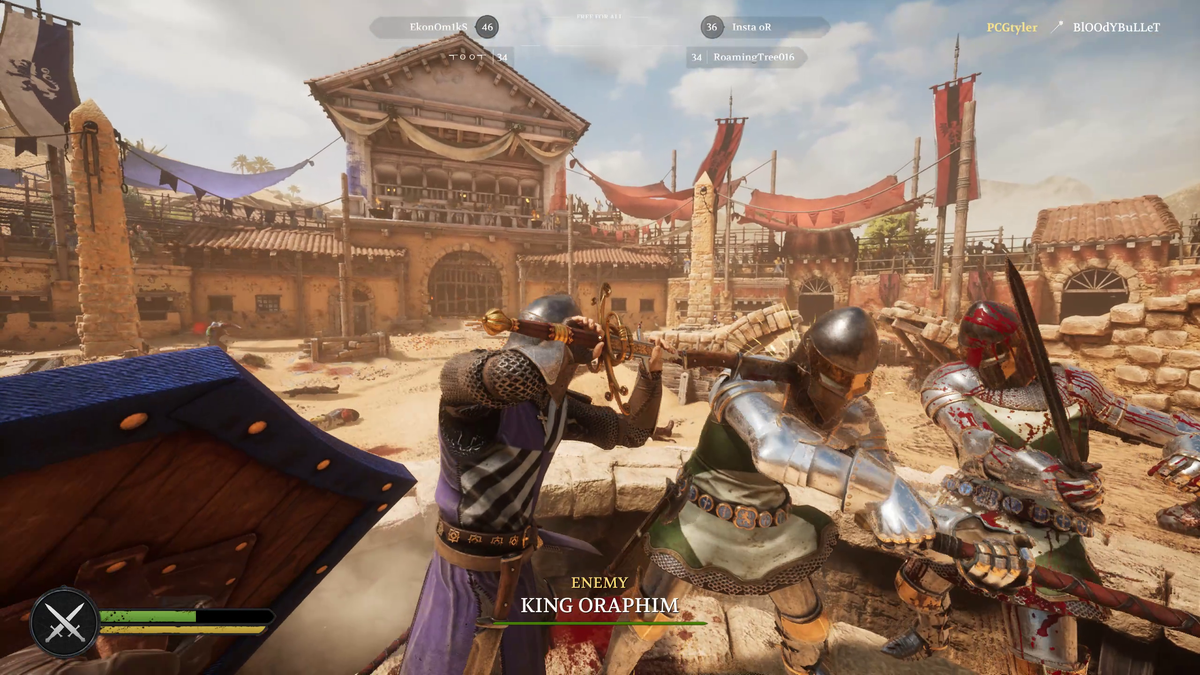 I was enthusiastic about Chivalry 2 when I first tried it at an event over a year ago, again when I played it in closed beta, and yet again in the open beta a couple weeks ago. Now it’s out on the Epic Games Store and I’m not nearly done bonking medieval knights in the head with morningstars and hammers. The novelty has worn off a little, but I’m still prepared to declare Chivalry 2 the game of summer 2021, and summer hasn’t even technically started yet. (I’m afraid that I am suggesting it’s a ‘knight boy summer.’)

Chiv 2 generates that late-night one-more-game buzz that a great summer game should, although I can’t indulge in it like I would’ve when I was a teenager and summers meant staying up all night and going to bed at 6:30 am. Still, I’ve been up past midnight goofing off in Chiv 2’s 64-player medieval melee battles a few times. The dedicated servers play a big role in keeping it compelling: I’m swinging swords and axes with and against the same people over and over, developing camaraderie and rivalries. It’s hard to let that end.

In that way, Chiv 2 is a PC-ass videogame, a thing of the past. But to me it also captures something essential about this moment: a heady excitement as many prepare to exit Covid-19 social hibernation after over a year. Developer Torn Banner couldn’t have intended this synchronicity, but the words I’d use to describe Chiv 2’s battles—loud, dumb, reckless—will surely be used to describe some of the parties that get broken up this July. People may not literally be screaming and sprinting at toward other right now, but give it time.

The better you get, the more fun it is

I wrote previously about how much I enjoy Chivalry 2’s medieval combat, and my feelings haven’t changed much now that it’s out. When I’m in the zone, I feel like Henry Cavill’s Geralt when he gets his “butcher” monicker in the first episode of the Netflix show. You can’t swat an arrow with your sword in Chivalry 2, but you can throw it into someone’s chest, and more or less be just as much of a mutant badass.

During that closed beta, I struggled to use the smaller weapons I wanted to master against giant axes and longswords. It felt like players carrying the big stuff were just going to swing back and forth and catch me eventually, and I worried that I’d ultimately feel pressured to join them in the big blade meta. It still seems like players who are prioritizing their K/D ratio go for big weapons, but I’m getting better with morning stars and short swords as I play more, and getting less concerned about the idea of “balance.” I can accept my spot in the middle of the scoreboard if it means I get a few good Geralt moments. Some of my nastiest sprees have been with a secondary weapon, because no one’s expecting to have their cheeks sliced up by a knife when everyone else is heaving halberds around.

Notes on the release version

We don’t have a formal Chivalry 2 review yet because, outside of the betas, you can’t really play a 64-player game before release unless you have 63 friends, and I don’t. It also doesn’t help that it came out just as we were being sucked into the E3 videogame news whirlpool. We will have a review of Chivalry 2 in the future. For now, here are a few observations to add to my pre-release impressions:

⚔ I’ve experienced some irritating latency even when my ping reads low. For instance, I’ll sometimes see an enemy take a hit well after it looked like I missed. Very frustrating, but I didn’t have this problem in the betas, so it’s probably something about the specific servers I’ve been on, or something about my internet connection. Annoyingly, I just moved to a new apartment, so I’m on a new network. I don’t think my extremely fast fiber internet is the problem, but I can’t rule it out yet. I’ll just have to keep playing and see how often I notice lag.

⚔ The presentation and interface still need some screws tightened. For example, if you try to join a server from the server browser and the join fails (say, because it filled up), you get kicked back to the main menu and have to reload the entire server list. Annoying things like that add up.

⚔ In my opinion, it’s OK to give teammates who are AFK or in the menu a friendly tap on the head as you run by. See below:

⚔ There are still a few kids getting mad in the chat, but not as many as there were in the open beta. In one match, an argument was ended when someone declared everyone to be too salty and pointed out that the game is fun. Still, I frequently turn chat off; you don’t want a corner of your highlight reel to be full of kids experimenting with bad words.

⚔ I still hate archers, but I’ve softened a little on the issue. It is fun to chase them down.

⚔ I still don’t like fire bombs, or the special abilities in general. The fire in particular can add some interesting area control, forcing players into new routes, but most of the time you just accidentally back into it and it ruins an otherwise fun duel.

⚔ I wish there were some sort of overtime system. The final minute of any game tends to be a formality as the losing team waits to lose. Even just a tiny chance for an amazing comeback would help.

⚔ New players struggle to figure out the objectives because they’re explained poorly, or not at all. That’s OK, just help them along after you’ve figured it out. (Hint: when in doubt, look for ladder parts.)

⚔ The Epic Games Store exclusivity might limit Chiv 2’s reach on PC for now, but there are lots of full servers here on launch week. It has crossplay support, so I don’t think there’s any worry it’ll be underpopulated. Mordhau still manages a few thousand players at a time; Chiv 2 should be fine.

⚔ Never show fear in the face of archers.

Chivalry 2 is $40 on the Epic Games Store. Torn Banner has big post-launch plans: new maps and weapons and things, plus the addition of horses. I’m not sure it’ll hold my interest past the summer, though—not because it isn’t good, but because it’s hard for any game to do that these days, with so much to play. Maybe it will, and if not, and there are worse ways to spend $40 than on a summer’s worth of whacking archers in the noggin.

If you do jump in, try playing Chivalry 2 with mouse and keyboard if you can, and do the tutorial. As in Mordhau and the first Chivalry, there’s more to the combat than clicking to swing, and you’ll just get frustrated if that’s your approach. (At the very least, heed this instruction: If your attack is blocked or you take a hit, defend. If you block an attack or score a hit, attack.)