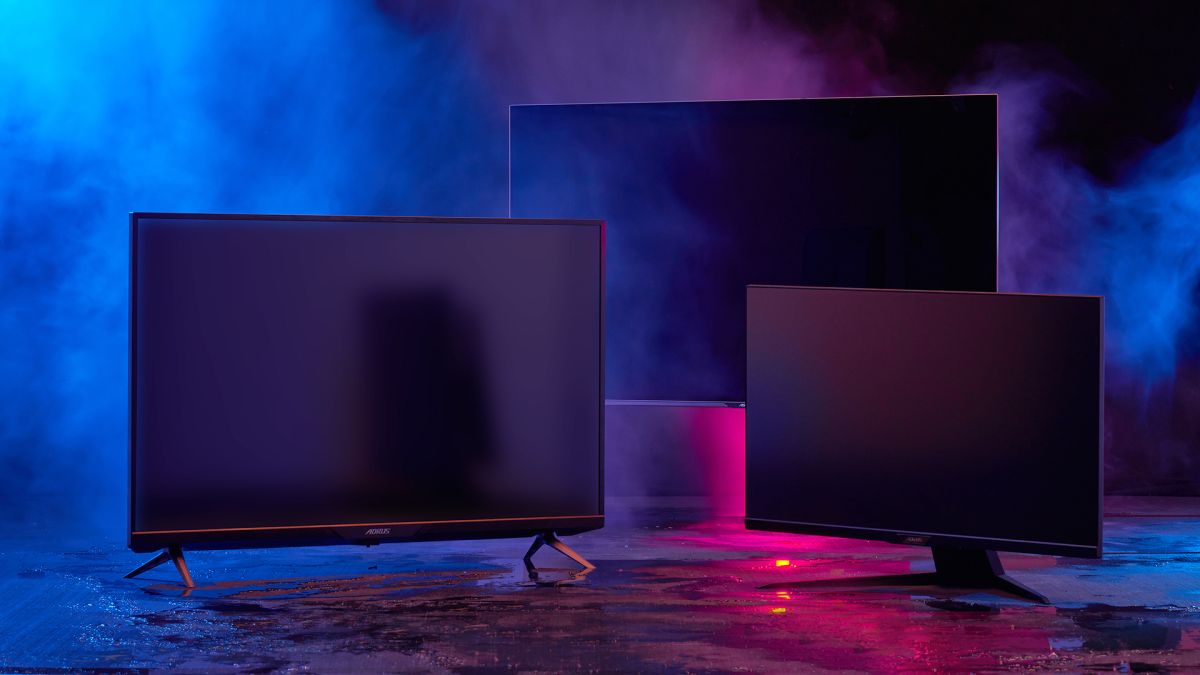 Answering the question, “How is a TV different to a monitor?” used to be relatively simple. TVs tended to be larger, had built-in tuners, low refresh rates and high signal lag. The latter made gaming a nightmare with heavily delayed actions playing out long after you’d pressed a button. Over recent years things have changed and TV manufacturers have realised that gaming is an increasingly important market… with a firm focus on consoles.

But what about PC gamers and competitive players who need the superior performance and features of computer monitors but feel limited by the smaller screens? Well, now AORUS has you covered.

AORUS has launched four new, UHD monitors with proper 4K resolutions of 3840×2160, refresh rates up to 144Hz and screen sizes up to *coughs* 48-inches! This makes them perfect to bring into the living room. They’re also available with matte, reflection-banishing screens, a full selection of PC friendly inputs and high-performance firmware that, AORUS promises, will continually be updated with new features. Not that you’ll find the features wanting.

In addition to un-televisual DisplayPort 1.4 sockets, the monitors all have the latest HDMI 2.1 specification which many people don’t realise is mandatory if you want to reach faster-than-60Hz refresh rates at UHD resolutions. It’s what enables PCs to hit 144Hz and the latest Xbox and PS5 consoles to reach 120Hz refresh rates at 4K. There are also 1ms grey-to-grey response times and 1ms Motion Picture Response Time (MPRT) ratings to banish motion blur and ghosting, leaving fast-and-frantic gaming movements rendered buttery smooth. Image tearing is banished with features like FreeSync Premium.

So, what are the differences between the models?

At the top-end of the line is the living-room-friendly AORUS FO48U. This beast has a 47.53-inch, Samsung AMOLED panel with a 120Hz refresh rate and 1ms response time. It sports the KVM feature, HDMI 2.1 connection and is capable of displaying 98 percent of the DCI-P3 colour space on the 10-bit display. Sumptuous.

If you like to sit a little further back from the screen, or have a really, really big desk, check out the 43-inch AORUS FV43U. This 4K screen has a 144Hz refresh rate and 1ms response time but uses a Quantum Dot Panel that offers 1,000-nit brightness (it’s DisplayHDR1000 certified) and 97 percent of DCI-P3 coverage. This all means you’ll be fully immersed in a cavalcade of accurate, HDR colour whether sat up close or far back on your living room sofa. Naturally, it also includes HDMI 2.1 and the KVM feature.

PC Gamer’s sister site TechRadar has just posted its review of the AORUS FV43U, and they liked what they found.

Striking a perfect balance between size, performance and features for those who want a monster screen while sitting at their desk is the AORUS FI32U. This sports a 31.5-inch, 4K SuperSpeed IPS panel that supports 10-bit colour and 90 percent DCI-P3. It has a 144Hz refresh rate, 1ms response time, HDMI 2.1 and the built-in KVM feature.

Our colleagues at TechRadar have just reviewed the AORUS FI32U – see what they thought.

If 48-inches is too much monitor for your gaming setup, or looking for something more affordable, know that AORUS’ parent company, GIGABYTE, offers a 28-inch 4K, 144Hz model to book-end the new range. It has a 1ms response time, SuperSpeed, IPS panel which supports 8-bit colour and 94 per cent of DCI-P3. It still has the built-in KVM feature. Alternatively, there’s also the GIGABYTE M32U with similar specs to the 28-incher, but with a nice big 32-inch screen.

The monitors also come with PC-quality colour performance. They offer up to 98 percent coverage of the demanding DCI-P3 colour gamut and the ability to tinker with six-axis colour control (red, green, blue, cyan, magenta and yellow) to get a picture just-so. There are smooth, 10-bit colour gradients along with jaw-dropping HDR to make AAA titles pop out from the screen. You can also modify this colour accuracy by using gaming features like Black Equalizer to reveal enemies hiding in shadows and highlights.

The AORUS monitors also feature an innovative KVM function which allows you to use the same keyboard and mouse with any computer plugged into the monitor. This works using a built-in USB-C port and USB-A hub.

Other gaming friendly features, that are very un-TV, include ‘Upgraded Aim Stabilizer’ which simultaneously enables motion blur reduction and V-Sync technology to greatly improve your FPS aim. The large screens are also well suited to Picture-in-Picture and Picture-by-Picture features so you can watch streams of your game, while you game.

Meanwhile, the Dashboard feature provides an overlay that displays a wide variety of customisable read-outs for things like FPS, fan speed, mouse DPI, component temperatures and CPU/GPU frequencies. Timing features let you easily keep track of elapsed game time and calculate things like your opponent’s use of props. You can also make use of customisable, on-screen crosshairs which are especially useful in games like Call of Duty’s Hardcore sessions where you’re otherwise reliant upon iron-sights and scopes.

So, whether you want to sit up close at a desk or relax on the sofa in your living room with a keyboard and mouse while playing PC-quality competitive and cinematic games, AORUS has an option for you. Welcome to the world of living room gaming.