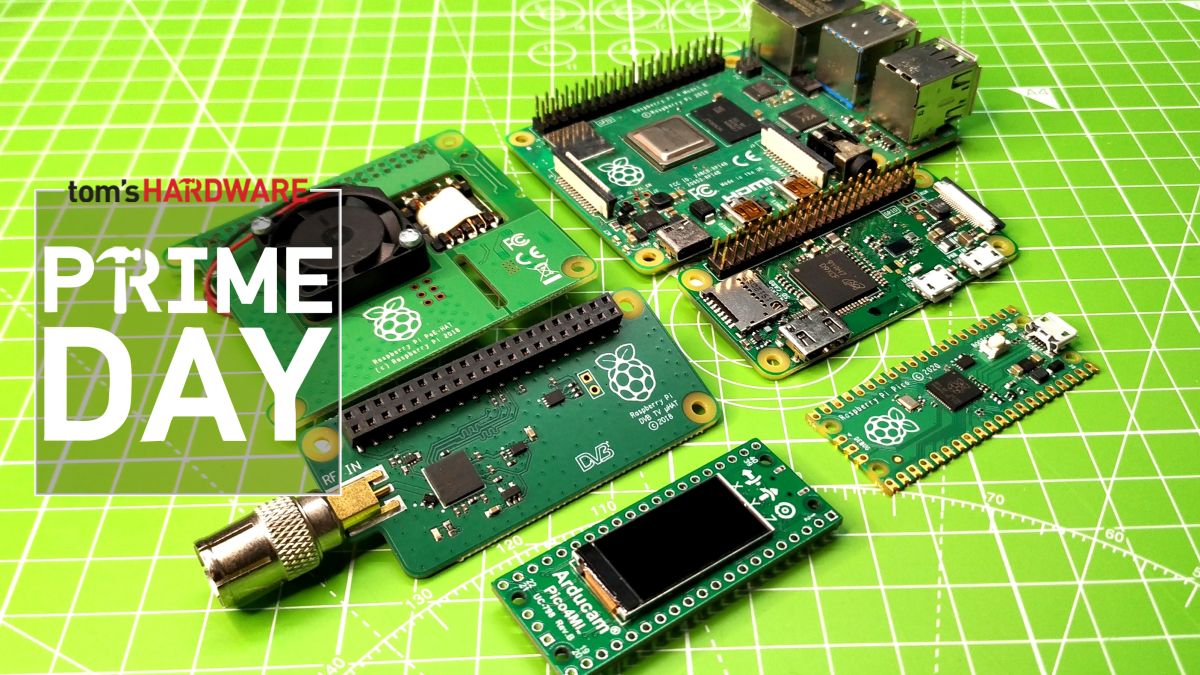 Amazon Prime Day is here and, with it, significant savings on various kits and accessories you need to make a great Raspberry Pi Project. Below we’re rounding up the best Prime Day Raspberry Pi deals from jumper wires to Pi-powered robot kits.

SunFounder Raspberry Pi Pico Starter Kit: was $49, now $30 at Amazon
A great gift for anyone who wants to get started learning electronics, this kit comes with a Raspberry pi Pico board and all the lights, sensors and wires you need for projects, along with lessons to teach you how to use them.View Deal

SunFounder RasPad 3.0: was $259, now $204 at Amazon
RasPad 3 is a handy portable tablet chassis for the Raspberry Pi 4. Inside the wedge shaped case we have space for a Raspberry Pi 4 (not included) along with a 3000mAh battery that offers up to five hours of power. We have access to the GPIO via a breakout header and the 1280 x 800 screen is bright and usable.View Deal

Yahboom Robotic Arm for Raspberry Pi 4B: was $360, now $288 at Amazon
It may look like it escaped from a Ford assembly line, but this metal Raspberry Pi 4 powered robot arm is an exceptional project to tackle and now with $72 off it is a great deal. With onboard camera, 6 DOF sensor and an iOS / Android app this robot is a seriously powerful platform for learning.View Deal

Arducam Pico4ML TinyML Dev Kit: was $49, now $39 at Amazon
Arducam’s Pico4ML is a drop in replacement for the Raspberry Pi Pico but with this board we a 160 x 80 LCD display and a QVGA camera builtin! The RP2040 SoC is ideal for microcontroller machine learning projects and at this price it is a low cost and easy to use entry to AI.View Deal

REXQualis Upgraded Complete Starter Kit for Raspberry Pi: was $40, now $32 at Amazon
Getting started with electronics on any model of Raspberry Pi you need the right components and this kit has everything that a budding engineer will need. From simple LEDs and buttons to IR receivers, RFID tags, servos, sensors and motors. This kit works with all models of Raspberry Pi, including the Raspberry Pi Pico.View Deal

Ultrasonic Module Distance Measuring Sensor Module Kit: was $6.89, now $5.51 at Amazon
Just over $5 for four ultrasonic sensors is a good deal and no-brainer to add to your projects box. The HC-SR04P ultrasonic sensor is compatible with all models of Raspberry Pi, including the Pico. The sensors work with 3 and 5V logic and uses tiny pulses of sound to measure distance. These sensors can be used with robots to avoid obstacle or used to create electronic musical instruments.View Deal

Arducam 5MP Camera for Raspberry Pi: was $10, now $8 at Amazon
Adding a camera to your Raspberry Pi is a great way to introduce more exciting project to learners. The Raspberry Pi has a camera connector (CSI) that can be used with official and compatible cameras. This camera from Arducam has a 5MP sensor and can be controlled using Python, giving coders a cool means to capture images and 1080P videos.View Deal

Night Vision Camera for Raspberry Pi: was $18, now $14.50 at Amazon
This night vision camera uses infra red light and a compatible lens to see in the dark. Useful for trail cameras, home security and robotics, this camera is compatible with all models of Raspberry Pi and works with the PiCamera Python library. As of writing, it is out of stock, but you can still buy it with the discount active and it will ship to you when stock comes in. View Deal

SunFounder PiSloth AI Programmable Robot Kit for Raspberry Pi: was $70, now $56 at Amazon
Robotics is the ideal way to learn coding and electronics with your Raspberry Pi. Walking robots are especially difficult but this kit provides everything you need to make a walking / dancing Wi-Fi controlled Raspberry Pi powered robot with sensors to detect objects and movement. View Deal

Yahboom Raspberry Pi 4B AI Robot Kit: was $225, now $180 at Amazon
It may look like something sent by Skynet, but this four wheeled, Raspberry Pi 4 powered robot is here to help us learn robotics. The four mechanum wheels can drive in any direction, even sliding to the left and right. The onboard camera feeds video directly to the Pi, enabling the robot to detect faces and gestures.View Deal

Elecrow CrowPi2 Laptop: was $329, now $263 at Amazon
This Raspberry Pi laptop has a slew of sensors and lights underneath the keyboard that you can use to learn all about electronics. It also has a ton of lessons built in.View Deal

UCTRONICS MNI PoE HAT for Raspberry Pi 4, with Cooling Fan: was $22, now $18 at Amazon
Power over Ethernet (PoE) was introduced with the Raspberry Pi 3B+ and also features on the Pi 4. Using this HAT we can power our Pi using a compatible PoE switch or injector. Now all we need is one cable for network and power, enabling the Pi to be used where power is hard to route. This HAT also features a fan to keep your Pi cool.View Deal

iUniker Aluminum Raspberry Pi 4 Case: was $12, now $10 at Amazon
A good case is essential to keep the Raspberry Pi 4 cool. Passively cooled cases, such as this from iUniker offer silent cooling and protection for your Pi. Made from aluminum, this case has cooling for the SoC, RAM and the PCIe chips that connects the chips directly to the case. Around the case there are precision cut outs for access to the GPIO, USB, HDMI and camera connections.View Deal

Akasa Gem Pro: was $30, now $24 at Amazon
It may look a little unusual, but the Akasa Gem Pro is a fantastic case for passively cooling your Raspberry Pi 4. This all aluminum case can keep an overclocked Raspberry Pi 4 cool even under a heavy workload. We may have restricted access to the GPIO, but this case is a must for Raspberry Pi home servers.View Deal

Anidees Open Frame: was $59.50, now $37.90 at Amazon
For those working with several Pis and want access to their boards’ ports, this open frame that stores three Raspberry Pi 4’s should prove to be a flexible solution. It works with Raspberry Pi 4 model B and the Google Coral development board. View Deal

REXQualis Jumper Cables: was $6.49, now $5.19 at Amazon
No matter how many electronics projects you’ve made, you always need more new jumper wires. This kit has 40 each of male-to-male, male-to-female, and female-to-female cables.View Deal