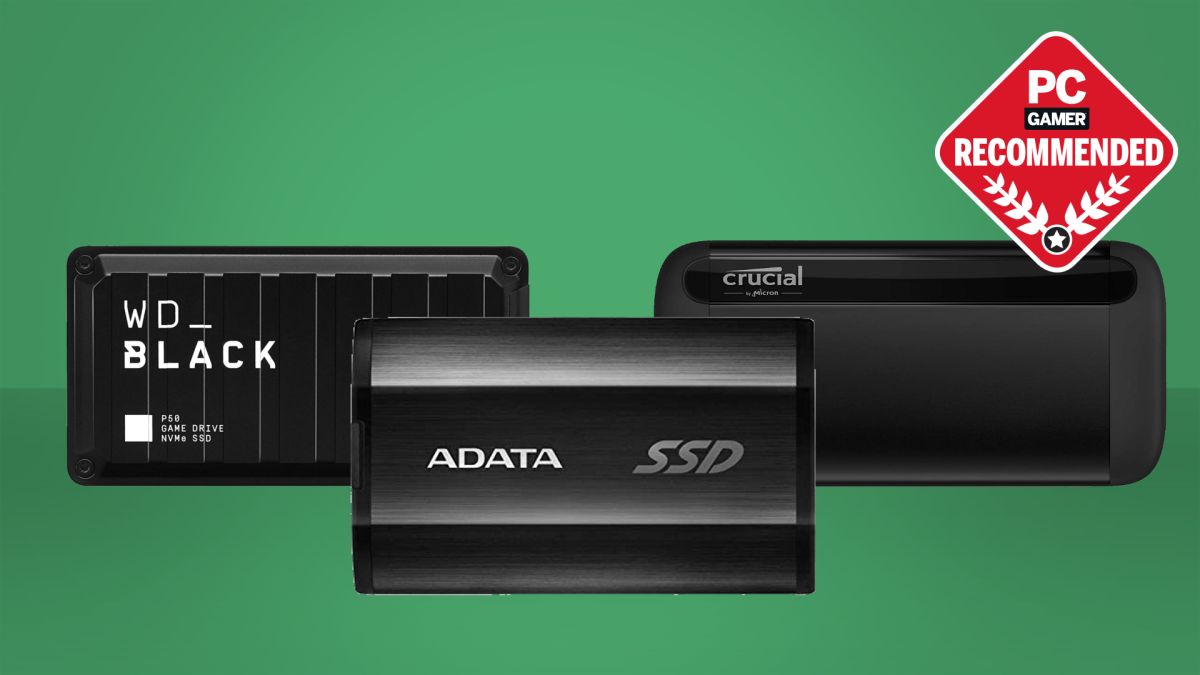 The best external SSD is almost a must in a world of ballooning game install sizes.
It doesn’t matter whether you’re a PC or console gamer, the limited storage space of a gaming laptop, PS5 or Xbox Series X/S makes extending your game library onto a large external SSD a mighty tempting option.

Like the top laptops, both the next-gen consoles support portable USB 3.2 drives for extended storage, and realistically you want an SSD based one to run games from. Though there’s also something to be said for simply having a handy drive you can use between PCs and other devices to keep your data flowing easily and securely.

The best USB Type-C drives deliver performance well beyond internal PC SSDs from just a few generations ago. Some external SSDs now crank out as much as 2GB/s of raw bandwidth. Admittedly, that’s a long way off the latest PCIe 4.0 M.2 drives for PCs, let alone the crazy-quick integrated storage in the new Microsoft Xbox Series X and Sony PlayStation 5.

What’s more, the Xbox Series X/S-specific expansion SSD is not only expensive; it’s also proprietary, so it can’t be used with other devices. By contrast, USB Type-C is the new universal standard. As for Sony’s Playstation 5, its M.2 SSD expansion slot has yet to be enabled, so USB-C is the way to go.

NVMe inside? Yep. TLC NAND memory? Affirmative. IP rating for increased robustness, including waterproofing? Check. All for an attractive price? Confirmed. The ADATA SE800 Ultra FAST 1TB really does have quite a bit going for it.

It starts with that M.2 NVMe drive, bridged to a USB interface. In this case, it’s a 10Gbps USB 3.2 Gen 2 interface rather than a 20Gbps USB 3.2 Gen 2×2 connection. But this drive is still claimed to be good for 1GB/s data transfers in both directions. Lest you have forgotten, that’s around twice as fast as any SATA-based drives, including internal SSDs connected natively via SATA.

That makes it unique among these SSDs, and, what’s more, given the competitive pricing, you’re getting that IP rating effectively for free. Performance-wise, in testing, the ADATA delivers in the headline 1GB/s spec for sequential transfers while notching up 4K random throughput that’s comparable to the competition at 21MB/s for reads and 40MB/s for writes.

If you’re looking for fast USB-powered external storage for games, this is currently as good as it gets. At least, it is in theory. The WD Black P50 Game Drive, tested here in 1TB format, and available in 500GB and 2TB flavors, is a rare breed of USB Type-C external SSD. That’s because it supports the very fastest USB 3.2 Gen 2×2 20Gbps interface, which is why it’s capable of read and write speeds up to 2,000MB/s.

As for real-world performance, in terms of peak sequential, the WD Black P50 easily maxed out the 10Gbps connection of our test PC, registering just over 1GB/s in both directions. It’s likely capable of the advertised 2GB/s with the right interface. Sustained performance is a little less impressive, with performance dropping to around 375MB/s after around 30GB of data transfer. Random access performance is reasonable rather than spectacular, with 22MB/s reads, and 40MB/s writes for the 4K QD1 metric.

If you want it all, you’re going to have to pay for it. So, sometimes it makes sense to compromise. Enter the Crucial X8 2TB USB Type-C SSD. It’s not the absolute fastest external SSD on Earth. But it is quick. It’s extremely capacious. It’s built into a really solid-feeling metal case. And it’s attractively priced. In fact, right now, it’s available on Amazon.com as we type for $249. That’s over $150 less than WD’s Black P50 Game Drive in 2TB trim.

And so it proves in our testing, with the Crucial X8 good for just under 1GB/s for sequential transfers in both directions. 4K random performance is decent, too, for this class of drive, with reads of 27MB/s and writes just over 40MB/s at QD1. Given the use of QLC NAND, one big question mark is sustained performance. However, while the Crucial X8 does drop down to 380MB/s with sustained traffic, in our testing, it maintained that level for many tens of GB, which puts it on a par with the more expensive WD drive.

A smart SSD built to last

For the power user who wants it all—speed, capacity, and portability—and who is willing to pay a premium for it, Samsung’s Portable SSD T5 is one of the slickest solutions out there.

It’s faster than any USB flash drive available, it has the capacity of a hard drive, and you can carry it inconspicuously in your pocket. This spunky little drive shares the same DNA as Samsung’s 860 Evo SSD, just in a smaller package.

Speed doesn’t come at the expense of storage space. While it’s easy to bump into the storage ceiling of a 32GB, 64GB, or even a 128GB USB flash drive, you’ll find there’s much more breathing room when dealing with terabytes of space, which is what the T5 offers. Whereas the first generation T1 topped out at 1TB, Samsung doubled the maximum capacity of the T5 to 2TB, a result of upgrading from 32 to 48 stacked layers of V-NAND flash memory cells for a denser configuration.

The toughest external hard drive on the market

There’s a fine line between compelling and compromised when it comes to external USB Type-C SSDs. For our money, the Crucial X6 falls on just the wrong side of that divide.

One of the knock-on implications of that architectural difference is that the X8 has a fully 2GB of DRAM cache where the X6 has none at all. The X6 also lacks a USB-C to USB-A cable, which seems particularly miserly. It’s the only drive here that doesn’t come with both a C-to-C and a C-to-A cable. That said, the X6 does support features like TRIM passthrough, which isn’t always the case on cheaper USB drives and ensures that performance should be sustained in the longer term. It’s also very compact for a 2TB drive, measuring 6.9cm by 6.4cm by 1.1cm.

As for raw performance, peak write speeds are a little disappointing at 378MB/s, as is the 12MB/s 4K QD1 write throughput. It’s also worth noting that write performance eventually drops to 180MB/s with sustained throughput. However, in our testing, it never dropped lower than that, even with over 50GB of sustained traffic.

Great security, but suboptimal for gaming

–Expensive for the performance

As a pure gaming drive, the Vava Portable SSD Touch is a little overqualified. The product of an Indiegogo crowd-funding exercise, its main claim to fame is to cram AES 256-bit encryption with fingerprint activation into a tiny footprint. That makes high levels of security very convenient. But it also adds to the cost of the drive.

What it’s not is particularly speedy. That’s largely down to the drives underlying the SATA interface, which pegs claimed peak performance to 540MB/s for reads and 480MB/s for writes. In practice, is Vava actually slightly outperforms those claimed sequential speeds. It also matches several NVMe-based drives for 4K random access performance, registering 23MB/s for reads and 40MB/s for writes. That said, the drive’s internal performance drops to 220MB/s when presented with multiple GB of sustained data transfer. All of which makes it a decent option as an all-rounder but suboptimal as a pure games drive.

This is not the fastest USB Type-C SSD you can buy for gaming. But then, it’s far from the most expensive. Compared, say, to the WD Black P50 Game Drive, the branding of the Seagate Barracuda Fast SSD 1TB looks like a bit of stretch. Rated at 540MB/s for reads and 500MB/s for writes, it’s simply nowhere near as quick.

Then again, that fancy WD Drive with its NVMe SSD and USB 3.2 Gen 2×2 20Gbps interface costs roughly 75 percent more for the same 1TB of capacity. Moreover, a great deal of that increased performance isn’t available on most PCs and all consoles due to limited interface support.

A great deal that is. But not all. The Seagate Barracuda Fast SSD 1TB is essentially a SATA SSD behind a USB bridge, which means performance is limited to 6Gbps despite the drive’s 10Gbps USB 3.2 Gen 2 interface. What’s more, in our testing, the Seagate Barracuda Fast SSD 1TB couldn’t even deliver its modest claimed performance, clocking just 306MB/s for sequential write performance. It also drops down to just 190MB/s with sustained multi-GB workloads.

Arguably even more problematical is the existence of NVMe-based drives for similar money. The ADATA SE800 Ultra FAST 1TB, for instance, is around twice as quick for peak sequential performance. It’s a pity because the Seagate Barracuda Fast SSD looks slick with its sleek enclosure and LED status light. And Seagate’s file syncing and backup software is handy. But there’s better performance to be had elsewhere.

Should I buy an NMVe or SATA external SSD?

Performance-wise, your choice is between a drive based on the SATA interface with a bridge to USB, or an NVMe interface, again behind a USB bridge. SATA-based USB Type-C drives top out at around 540MB/s peak performance, while the NVMe options up the ante to a maximum of 2GB/s.

At least they do, in theory. To achieve those peak speeds, you’d need a USB 3.2 Gen 2×2 port with 20Gbps capability. That’s something that remains relatively rare on PCs and laptops and isn’t available on any console, including the new Sony PlayStation 5 and Microsoft Xbox Series X. Instead, you’ll find most high-speed USB ports top out at 10Gbps.

Indeed, it’s unlikely that USB 3.2 Gen 2×2 will ever become widely used. Instead, USB 4 will likely take over, increasing bandwidth to 40Gbps. But the good news is that USB 4 is backward compatible with USB 3.2 Gen 2×2. So, it will be possible to extract maximum performance from a USB 3.2 Gen 2×2 20Gbps drives in the future using a USB 4 interface.

What type of NAND flash should I go for?

Interface specification isn’t the only deciding factor when it comes to performance. Features like controller specification and the type and quality of NAND flash used are also important, though it’s not always easy to identify the finer details. Many manufacturers are reluctant to quote full specifications. For instance, drives with four-level QLC NAND memory will tend to have worse underlying performance than those with triple-layer TLC memory.

Form factor and other frills should also be part of your calculations. Some drives are built to be particularly robust; others include extras like hardware encryption, status LEDs, or even fingerprint scanners for added security. Some of those features fairly tangential to the basic remit of providing high-performance storage space for a games library. But you might also be looking for a drive that can serve more than one role.