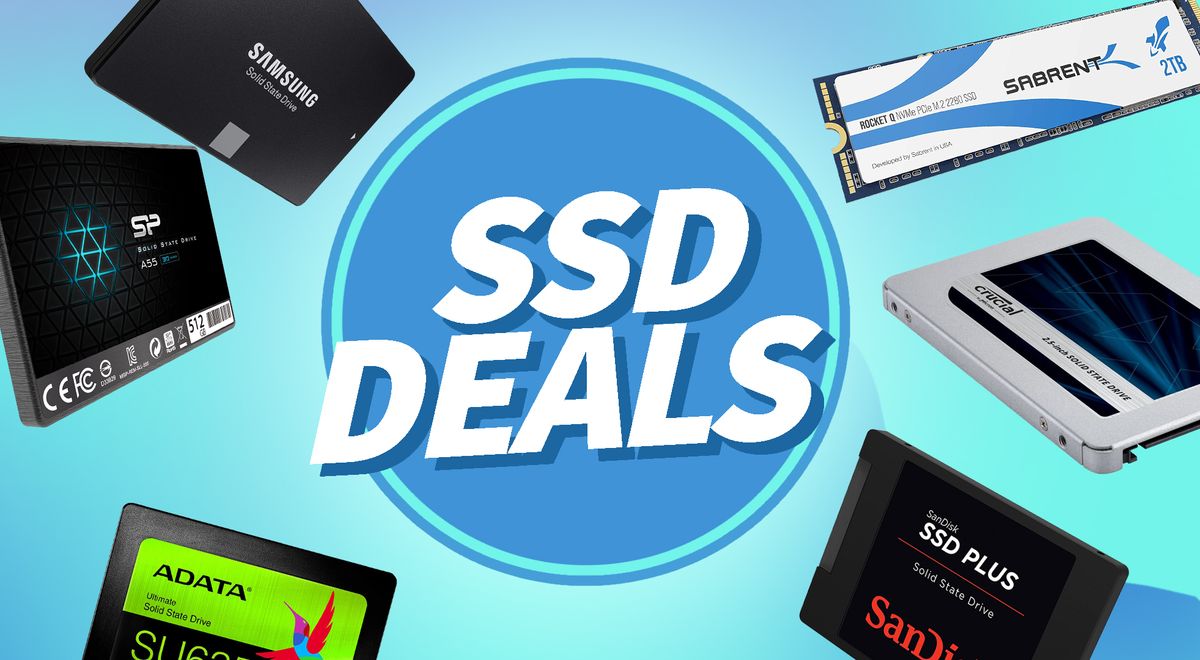 Best Deals on SSDs and HDDs

With SSD prices falling, as we get further into 2021 this is a good time to upgrade your storage, whether it’s picking up a speedy new boot drive (perhaps one of the best SSDs) or adding secondary storage that increases your capacity.

This is also a great time to look for savings on the best external drives you can use for backup or for transferring data between all your devices. If you don’t already have a large external hard drive or SSD, you really should get one in order to do full system backups or just keep your important files somewhere besides the cloud.

Below, we’ve listed the best SSD and hard drive deals that are available right now from any store on the web. Also, don’t forget to check out our lists of the best tech deals overall, best monitor deals, best CPU deals, best laptop deals and best gaming PC deals.

SSD Deals: What to Look For

Manufacturer: If you find a deal that’s too good to be true from an unknown manufacturer, it’s usually best to pass on it and hold out for a more reputable brand.

SATA or NVMe: SSDs either use the SATA or NVMe interface, with the latter being as much as six times faster (or more). However, you need to know which your PC supports. All 2.5-inch drives are SATA, but M.2 drives could be either NVMe or SATA interface.

Capacity: 1TB seems to be the sweet spot for price and performance, with decent NVMe drives going of around $100 or less and high-performance ones in the sub $150 range.  You can save money with a 512GB drive or, for an older PC with limited needs, a 256GB unit can be extremely cheap.

Each SSD deal listed below was individually verified to ensure value. But don’t just take our word for it- there are tools you can use to improve your research game.

We recommend using third-party applications to help research price history and compare SSD prices between vendors. Google Shopping and PCPartPicker provide useful comparison data, while CamelCamelCamel is ideal for checking Amazon price history. Using these websites will help make sure any deals you find are genuine.

Samsung 870 EVO (1TB): was $129, now $119 at Newegg
The SSD all-star that offers a reliable and responsive architecture, AES 256-bit encryption, an attractively restrained design and incredible reliability, reinforced with a 5-year warranty.View Deal

WD Black SN850 1TB: was $229 now $199 at Newegg
Jump on the PCIe Gen4 super highway with speeds up to 7000MB/s read and 5300MB/s write, all in a compact package with all the durability you know and love from Western Digital storage products.

Sabrent Rocket 2TB NVMe SSD: was $599.99, now $299.98 at Amazon
This internal performance SSD gives your build a serious speed increase with sequential read speeds up to 3,400 MB/s and 2,700 MB/s write, based on Toshiba’s BiCS 3D TLC NAND flash memory. Plus, Sabrent’s software package helps you make the most of your drive.

Kingston 1TB A2000 NVMe: was $139, now $116 at Amazon
High sequential read and write speeds alongside support for a full security suite (TCG Opal, XTS AES 256 bit, eDrive) make this a great drive for anybody — made better with its low price.View Deal

Crucial BX500 2TB SATA SSD: was $199, now $175 at Amazon
Speed your system up with this generous amount of SSD storage — offering sequential read speeds up to 540MB/s and write speeds of 500MB/s, alongside a three year warranty.
View Deal

PNY XLR8 CS3040 1TB: was $179, now $157 at Amazon
The Gen4 interface of this NVMe delivers performance up to 5,600MB/s seq. read and 4,300MB/s seq. Alongside this, you have some nice premium features to ensure stability and longevity such as DRAM Cache and enhanced reliability.View Deal

XPG Gammix S50 Lite Series (2TB): was $299, now $276 at Newegg
With $70 off this NVMe SSD, you can add a lot of high speed storage for a good price. With read/write speeds up to 3900/3200 MB/s, SLC caching and advanced LDPC ECC technology, this has all the premium features for a long lifespan.

WD Blue 3D NAND 1TB Internal SSD: was $129, now $109 at Newegg
This 1TB internal M.2 SSD offers sequential read speeds up to 560 MB/s and sequential write speeds up to 530 MB/s with a power draw up to 25% lower than previous generations.View Deal

Seagate Expansion 14TB external desktop hard drive: was $274, now $259 at Adorama
A beasty amount of portable storage — 14TB of it to be specific. This is great for not just archiving and back ups on the cheap, but for storing any of the more space-hungry games while you’re not using them, ready to move back onto your SSD for faster loading.

Mushkin Enhanced RAW Series 1TB: was $109, now $89.99 at Newegg
This drive features built-in LDPC ECC. According to the specs, it uses internal flash RAID and Static Data Refresh technology. This edition has read/write speeds as fast as 560/520 MBps.View Deal

Western Digital WD BLACK SN750: was $129, now $87 at Newegg
Use promo code 93XQE64 to get this offer. This package includes both a 500GB module and a heatsink. It can reach read speeds as high as 3470 MBps. This isn’t the cheapest 500GB SSD but it’s one of the best offers on this model since its release.View Deal

WD Purple 4TB Surveillance HDD: was $139, now $95 at Newegg
This HDD from Western Digital has a 4TB storage capacity. According to the specs, the RPM can get as high as 5400.View Deal

Samsung T5 Portable 2TB SSD: was $279, now $229 at Amazon
Get up to 2TB of storage with this offer on the Samsung T5 portal SSD. It can reach transfer speeds up to 540 MBps and uses a USB 3.1 interface.View Deal

WD Blue SN550 (1TB): was $129.99, now $109.99 at Newegg
This PCIe 3.0 M.2 SSD provides real speed to the load times of your build, alongside the Western Digital-designed controller and software support you’d expect from a reputable company like WD.View Deal

Samsung 970 EVO (1TB Refurbished): was $179, now $143 at Best Buy
If you want the fastest, the best choice is plugging in an NVMe SSD to your motherboard. The Samsung 970 EVO brings awesome performance and speeds up to 3.5 GB/s.View Deal