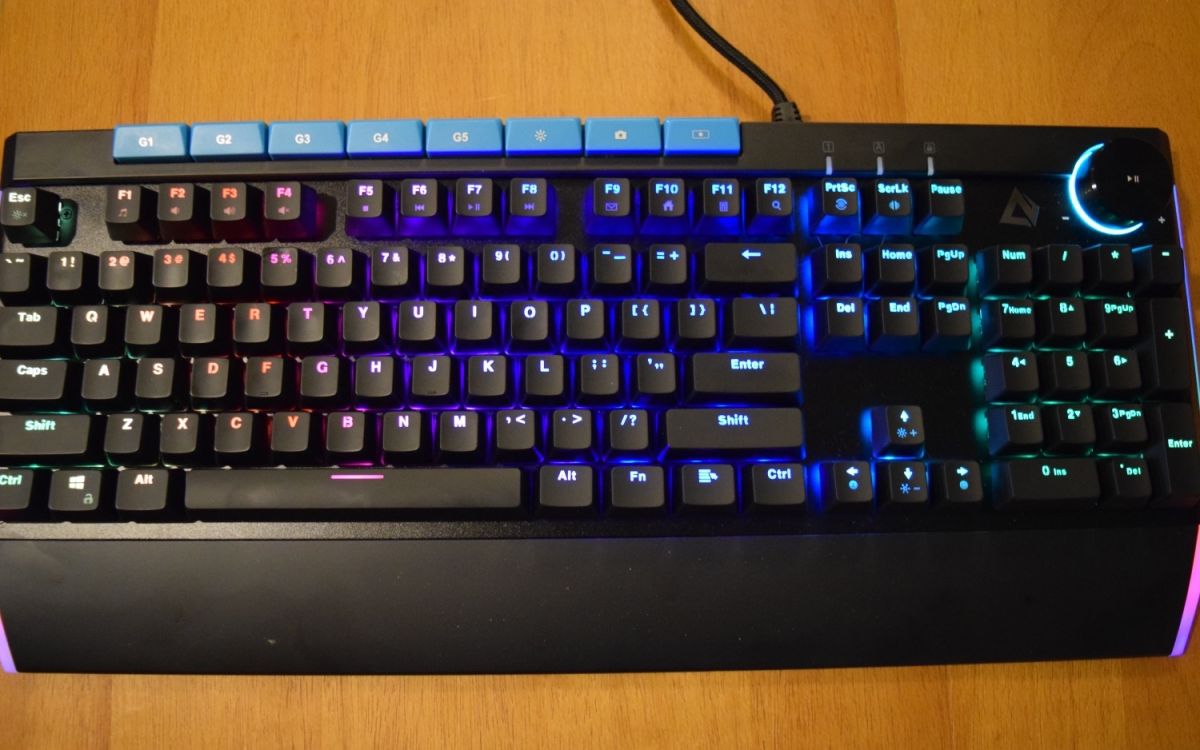 The Aukey KM-G17 is a behemoth of a keyboard with a budget-friendly price that features clicky blue mechanical switches, dedicated macro keys, and more RGB lighting than most of its competitors. While the more expensive competitors on our best gaming keyboards list have better build quality and more features, this $59 keyboard offers an impressive feel and feature set for the money.

Design of the Aukey KM-G17

The Aukey KM-G17 is a full-sized keyboard with a larger-than-usual case that accommodates a built-in, non-removable palm rest made of matte plastic that offers little in the way of comfort, five macro keys, and a volume knob found in the top-right corner. There’s no mistaking this behemoth of a keyboard as a general purpose device; Aukey clearly designed it with the gaming market in mind. Whether or not that’s a good thing is a matter of personal preference.

We should probably put that “behemoth” descriptor in context. I measured the KM-G17 at 18.1 inches wide, 7.8 inches deep, and 1.4 inches tall with a weight of roughly 2.5 pounds. Its top can also rise approximately 0.25 inches using the flip-out feet under the keyboard, which only offer a single adjustment angle. That’s significantly larger than most of the keyboards I’ve reviewed, but it’s not far off from other full-sized boards, especially given the non-removable palm rest. So its behemoth-dom is relative.

Less relative is the sheer amount of RGB lighting Aukey packed into the KM-G17. All of the keys feature RGB backlighting, as does the volume knob, and strips of RGB LEDs line the sides. Those strips were designed to diffuse the lighting underneath, resulting in a pleasant glow rather than blinding light. I liked the look more than I expected to.

The Aukey KM-G17 makes its status as a budget keyboard clear in a few ways: It features ABS plastic keycaps that won’t be as durable as their PBT counterparts, for example, and it’s saddled with a thick attached cable that can actually pull the keyboard towards the connected system e without added stability from a desk unless the system is directly behind the keyboard. (Mine is to the left.). At 5.2 feet long, the cable is also shorter than most,  but at least its braiding makes it kink-resistant.

Typing Experience on the Aukey KM-G17

The KM-G17 features Aukey Blue mechanical switches with 4mm of travel, 50 grams of required actuation force and 1.9mm of pretravel, along with a rated 50 million keystroke lifespan.   That’s similar to Cherry MX Blue switches which also have 4mm of travel but with 60 grams of actuation force and 2.2mm of pretravel. Aukey’s switches also make a very distinctive “click” upon actuation that seemed damned near deafening coming off the non-mechanical switches I was using prior to this review.

Those clicks sound fairly standard, for the most part, and I didn’t notice undue pinging on any of the keys. However, the click sound was a little thinner than on Cherry MX blue switches and other vendor-specific clicky switches that I have tested. That was a bit of a surprise—I’ve encountered plenty of pinging in far more expensive keyboards. Just note there’s going to be some variation between units when it comes to pinging issues.

Typing on the Aukey KM-G17 was slightly uncomfortable at first because of the built-in plastic palm rest—I don’t usually have one—and the keyboard’s height in comparison to the Logitech MX Keys for Mac that I purchased shortly before I started this review. But it didn’t take long to acclimate myself to the KM-G17, and my typing performance is actually similar on both keyboards.

In short: If you like clicky mechanical switches and don’t mind a built-in palm rest the Aukey KM-G17 won’t disappoint, and so long as the build quality is somewhat consistent between units, you shouldn’t have to worry too much about pinging. Aukey’s design is comfortable to type on, responsive, and should prove about as durable as other mechanical keyboards.

The Aukey KM-G17 offers all the features you’d expect from a gaming keyboard. A built-in Gaming Mode disables keys that can wreak havoc if they’re pressed while you’re playing a game, full n-key rollover makes sure inputs are accurately picked up, and the 1,000 Hz response time is standard for most keyboards. The category is at the point where these are baseline features.

I was able to walk, run, and bunnyhop my way through the latest Valorant map without any issue. There were times when my teammates complained about the clicking if I forgot to stop holding down my push-to-talk button, but that’s not the Aukey KM-G17’s fault. And I’ll confess that clicky keyboards can make intense moments feel even more dramatic.

But the Aukey KM-G17 otherwise performed exactly as expected. This isn’t my preferred form factor for gaming—I’d much rather have a smaller keyboard that doesn’t require me to flare out my shoulders to reach the WASD cluster while also taking advantage of my larger mousepad. That’s another preference thing, however, and some folks will favor full-size keyboards.

Software and Features of the Aukey KM-G17

Aukey doesn’t have a central app that can be used to manage all of its products. Instead, the company offers a utility designed specifically for each product that can be found on its website. The software first checks to see if a firmware update is available for the device, then it provides access to an array of standard features.

Four of those options are fairly straightforward: Default makes the key perform as intended, Keyboard allows you to reassign keys, Mouse Function can be used to simulate mouse input, and Forbidden disables the key. Macro runs tasks you’ve created. Combo key selects up to three keys that will be input when the assigned key is pressed, which means you could type “thx” by hitting a single key, for example. Run Program launches an app for you, Multimedia controls video and audio playback and Windows Hot-key performs common OS tasks such as starting Task Manager or using the clipboard.

The Lighting menu is used to control the Aukey KM-G17’s RGB lighting. There’s only a single RGB zone, unfortunately, which means every light on the keyboard is controlled at once. But the software offers 19 pre-built lighting effects, and can be used to customize those effects’ speed, direction, and brightness in addition to creating a user-defined lighting effect as well.

Gaming Mode is the simplest menu: It toggles Game Mode (which should probably be named differently, but that’s up to Aukey, I suppose) and decides how that mode behaves. There are options to have it disable Alt+Tab, Alt+F4, and the Windows key or any combination thereof when the mode is in use.

Last comes the Macros menu. This is where you can record multiple key presses and mouse inputs to create complex workflows performed with the press of a single key. Aukey provided ways to set a delay timer as well as a fixed delay, too, for when you need to wait before entering the next input.

The Aukey KM-G17 uses onboard storage to save an indeterminate number of profiles; I created more than 10 without issue before I decided to stop.

One thing to note: The KM-G17 uses a custom window that doesn’t include traditional Windows minimize, maximize, and close buttons. This is fine, but I also noticed that the window is sluggish to respond when it’s dragged around, and doesn’t seem to use the same animation as other windows. It’s much floatier, which is disconcerting for reasons I can’t describe. That isn’t a deal-breaker, but it’s definitely odd, and it’s the kind of thing that might put someone off using the program.

The Aukey KM-G17 is a surprisingly compelling keyboard that doesn’t skimp on features despite its budget price. It doesn’t have all the niceties found in premium keyboards—an aluminum top plate, detachable cable, removable wrist rest, and doubleshot PBT keycaps are some of the most notable omissions from Aukey’s offering.

Yet there are some ways in which the KM-G17 actually beats out more expensive keyboards. The RGB lighting is as plentiful as it is brilliant, for example, and none of the keys on this review unit ping when they’re pressed. Having a braided cable is also nice, even if the cable’s a bit thick for my taste.

Aukey knew exactly who it was targeting with this keyboard: People looking for a full-size keyboard defined by its RGB lighting, clicky mechanical keys, and built-in palm rest. Anyone looking for all of these features—or even just two of them—would do well to consider the KM-G17.