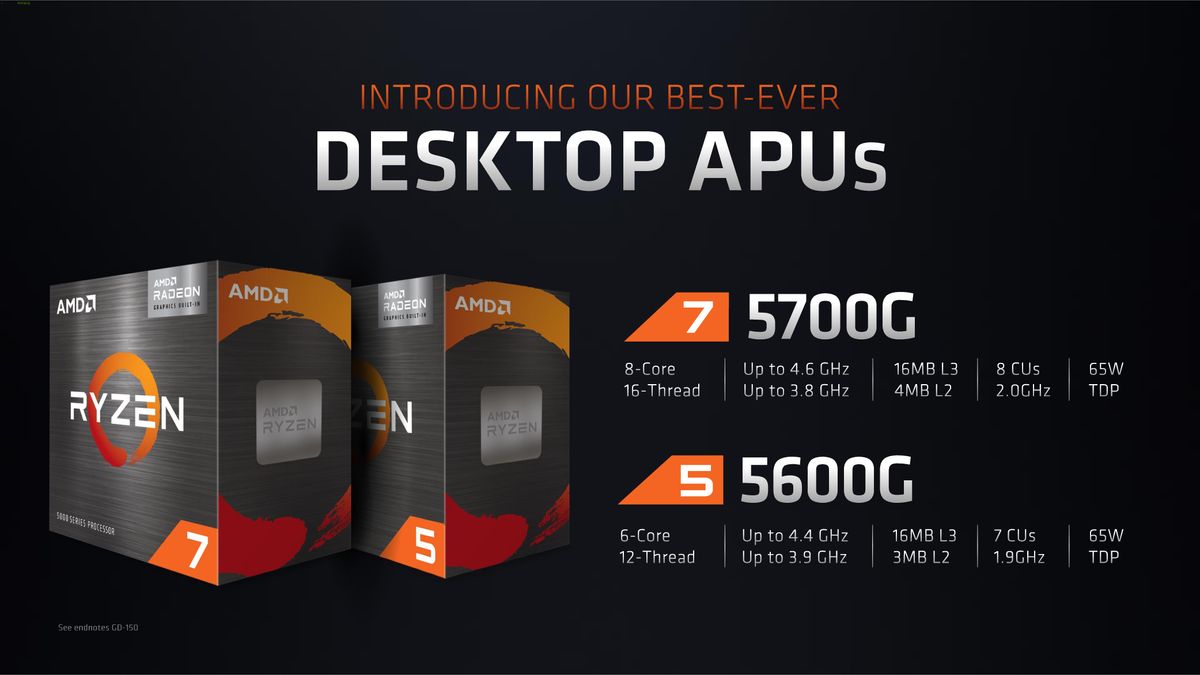 The new Cezanne chips mark the first new APUs for desktop PCs that you’ll be able to buy at retail since AMD launched the Zen+ “Picasso” models back in 2019. AMD did bring a refresh of those chips to market as the oft-maligned Ryzen Pro “Renoir” series, but in a disappointment to enthusiasts, those chips were destined for professional users and thus not available at retail.

In fact, AMD actually brought the very chips it’s announcing today to OEM systems a few months ago, meaning we already know most of the details about the silicon. The Cezanne APUs, which come with Zen 3 execution cores paired with the Radeon Vega graphics engine, feel like they’re a bit late to retail. The company’s first salvo of Ryzen 5000 processors delivered a stunning blow to Intel as it took the unequivocal lead in desktop PCs, but AMD’s pivot to premium pricing left it exposed with two massive gaps in its product stack. Unfortunately for AMD, Intel’s Rocket Lake blasted in a few months ago and plugged those gaps.

Now AMD’s retort comes as retail availability of a few of the Cezanne chips, though it’s noteworthy the company is still holding back several of its lower-end models from the retail market. Given the ongoing graphics card shortages, these newly revamped APUs are a welcome sight for the gaming market and serve as AMD’s “non-X” chips that traditionally offer more attractive price points at a given core count. That is if AMD can keep them in stock, of course. Let’s take a closer look.

The Ryzen 5000G lineup spans from four to eight cores, but AMD is only bringing the eight-core 16-thread Ryzen 7 5700G and six-core 12-thread Ryzen 5 5600G to retail, while the Ryzen 3 5300G remains relegated to the OEM-only market (at least for now). AMD also isn’t bringing the 35W GE-Series models to retail, either, as it continues to focus on premium chips during the ongoing global semiconductor shortage.

The Ryzen 7 5700G addresses the ~$350 price point to plug the sizeable gap between the $449 Ryzen 9 5800X and $299 Ryzen 5 5600X. That big gap left Intel’s Core i7-11700K with plenty of room to operate, but AMD says the new 5700G will plug that gap with CPU performance that slots in perfectly between the other 5000 parts, not to mention the strengths borne of the integrated Vega graphics engine.

Based on suggested pricing, the 5600G contends with the Core i5-11600K and doesn’t do much to address the current value budget champ, the Intel Core i5-11400. That’s largely because AMD has decided not to include the 65W R 3 5300G, which it ships into the OEM market, in this round of chip releases. It also has yet to release the GE-series chips listed in the table below. AMD hasn’t indicated when the R 3 or GE-Series Cezanne chips will come to market.

Of course, integrated graphics are the big attraction for APUs. AMD continues to pair its APUs with the Vega graphics architecture, just as it did with the 4000-series APUs. AMD reworked the architecture for its last go-round — the revamped RX Vega graphics delivered up to ~60% percent more performance per compute unit (CU) than its predecessors, which equated to more graphics performance from fewer CU. We aren’t sure if AMD has made a similar adjustment this time around, but we’re sure to learn more as we get closer to launch.

As with all Ryzen 5000 processors, Cezanne fully supports overclocking, which includes memory, graphics and CPU cores. AMD also says that the auto-overclocking Precision Boost Overdrive (PBO) and adaptive offset features are also supported. The Cezanne chips drop into the same motherboards as the current-gen Ryzen 5000 processors, so X570, B550, X470 and B450 are all supported. As with the other Ryzen models, memory support weighs in at DDR4-3200, though that does vary by DIMM population rules.

The new APUs hail from the Ryzen 5000 Mobile family (deep dive here), so they have physically identical silicon that has been transitioned from the FP6 BGA-mounted arrangement found in laptops to the AM4 socket on desktop PC motherboards. AMD then simply tunes the silicon for the more forgiving power limits and thermal conditions of the desktop, meaning that it can uncork the power settings and be more aggressive with boosting activity while being less aggressive with power-sharing/shifting between the CPU and GPU units.

However, in contrast to the existing Ryzen 5000 chips for the PC, the APUs come as a single monolithic die. That results in a less cache than we see with the chips without integrated graphics, like the eight-core Ryzen 5 5600X. The 5600X comes with 32MB of L3 cache, which is significantly more than the 16MB of L3 cache found on the eight-core Ryzen 7 5700G. We’ll be sure to poke and prod at the cache when the silicon lands in our labs.

Additionally, the 5000G chips have the same I/O controller on the SoC as the mobile parts, so the chips are limited to 24 lanes of PCIe 3.0, as opposed to the 24 lanes of PCIe 4.0 found on the other Ryzen 5000 parts. This comes as the tradeoff of bringing the mobile architecture to the desktop PC, with AMD’s initial decision to stick with PCIe 3.0 for its mobile parts largely being driven by battery life concerns.

AMD shared a surprisingly slim selection of its own benchmarks to compare the Ryzen 5 5700G with Intel’s Core i7-11700. AMD’s test notes are also lacking. As with all vendor-provided benchmarks, you should view these with the requisite amount of skepticism.

As expected, AMD’s benchmarks show notable performance advantages across the board, especially when gaming on the 5700G’s Radeon Vega 8 graphics compared to the -11700’s UHD Graphics 650 with the Xe architecture. AMD’s last batch of 5000G comparative benchmarks were much more expansive when it compared Cezanne to the Comet Lake chips, but the Rocket Lake comparisons are far more limited. We’ll suss all that out in the review.

AMD also released its Ryzen 5000G Pro series today. As you can see in the slides above, aside from a few extra professional features, they’re identical to the client chips.

Overall the Cezanne desktop APUs look promising, and AMD’s pricing goes a long way to addressing the notable price gaps that come from its lack of value “non-X” chips with the Ryzen 5000 generation, an exclusion that has received plenty of criticism from the enthusiast community.

AMD’s timing for desktop APUs could be a bit better — Intel’s value Rocket Lake chips have been on the market for several months, and the continuing chip shortage coupled with cryptomining has destroyed any chance of scoring a reasonably priced GPU, at least for now. That means a chip with competitive 1080p gaming performance will be a hit with enthusiasts looking to wait out the current GPU crisis.

That said, we’re still seeing a complete lack of AMD’s cheap chips on the market, so the company’s decision to keep the Ryzen 3 and 35W GE-Series models off the retail market is disappointing. It makes good business sense given the state of the market (AMD sells every single high-end chip it punches out), but we’d like to see some improvement on the lower end of the market.

The Ryzen 5000G chips come to market on August 5, 2021. As you can imagine, we’ll have the full story when reviews arrive near that same time.