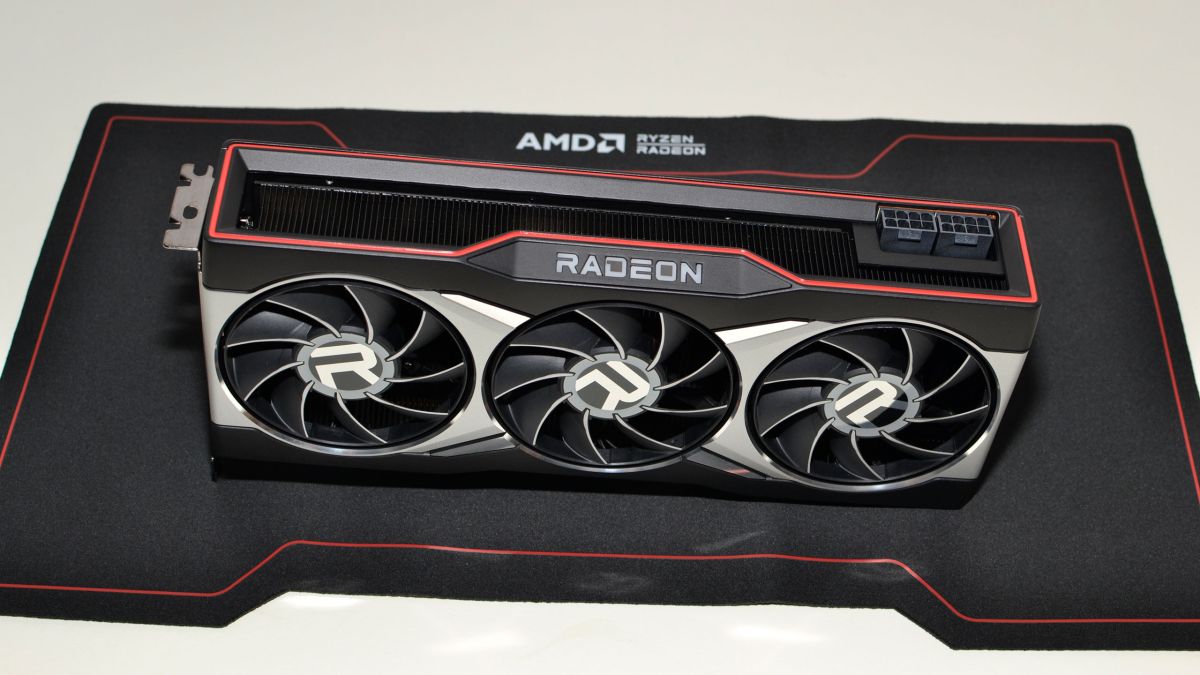 The AMD Radeon RX 6900 XT is officially AMD’s new halo product, surpassing the Radeon RX 6800 XT and RX 6800 by offering the fully-enabled Navi 21 GPU with 80 Compute Units. The latest generation GPUs sit atop our GPU Benchmarks hierarchy and rate as some of the best graphics cards currently available (if we use the term “available” loosely). The 6900 XT is also the most expensive AMD graphics card we’ve seen in quite some time — the last time AMD sold a GPU priced at $1,000 or more was the Radeon Pro Duo (2016), a very limited quantity dual-GPU card. With RX 6800 XT taking on RTX 3080, the goal is clear: AMD wants to offer competitive performance to the GeForce RTX 3090 while undercutting Nvidia’s price by $500.

That’s all well and good, but there are a couple of problems when comparing the GeForce RTX 3080 and 3090 to the Radeon RX 6800 XT and 6900 XT. First, RTX 3090 more than doubled the VRAM of the 3080. It also has a wider memory bus and 20 percent more shader cores. Finally, it increased the power target by 10 percent and often delivered superior performance in professional workloads. In contrast, the RX 6900 XT has 10 percent more shader cores than the 6800 XT. And that’s it.

Let’s get straight to the point. On paper, the RX 6900 XT doesn’t look like a good deal. We’re not saying the RTX 3090 is a better deal for gaming purposes, but at least it offers some tangible benefits over the RTX 3080. If rumors of a 20GB RTX 3080 (aka, RTX 3080 Ti) prove true, that would be a better comparison point. Of course, all of this is somewhat academic right now, as supplies of the latest generation graphics cards have proven woefully inadequate. If you can find an RX 6900 XT in stock for $999, have at it! But we expect it will sell out just as quickly as its lesser siblings — faster, in fact, since we anticipate supplies of RX 6900 XT will be even more limited considering it requires a fully-enabled Navi 21 chip. We doubt yields of that quality of chip will be higher than the partially disabled chips in the 6800 XT, which were still nowhere near sufficient to meet demand.

There’s really not much to say about the specs that we haven’t already covered. The RX 6900 XT has the full 80 CUs and 5120 shader cores that the Navi 21 GPU offers, and the remaining specs, including memory speed and TDP, are the same as the RX 6800 XT. Which isn’t to say that there aren’t differences in the silicon.

Binning and sorting chips from silicon wafers is nothing new, but the best chips often come from closer to the center of the wafer, where there are fewer defects. Since the 6900 XT requires a fully functioning Navi 21 chip, it almost guarantees other characteristics like power and voltage requirements will be better as well. How much does that matter in practice? If you’re hoping to overclock and reach maximum performance, the silicon lottery can get you an extra few percent. Considering the 6900 XT already costs 50 percent more than the 6800 XT, however, that’s a big jump in price for a likely minor improvement in overall performance.

The Radeon RX 6900 XT looks identical to the RX 6800 XT, except for the product label. The packaging isn’t quite the same, however. Inside the main box, the RX 6900 XT comes wrapped in a mouse pad. It’s a nice little extra if you need a mouse pad or AMD swag. It’s a relatively large pad as well — not big enough to cover your entire desk, but much larger than a basic pad.

The RX 6900 XT is a dense graphics card, weighing slightly more than the RTX 3080 while sporting similar dimensions. It’s a bit thicker, occupying 2.7 slots, but it’s also about 2cm shorter. You could potentially fit it into a smaller build, but we recommend exercising some caution as ejecting 300W (or more) or heat into a small case will hurt performance. Actually, if you’re doing a smaller case, just save yourself some money and buy the 6800 XT — we’d bet once thermals level out, the two cards will perform nearly the same.

Like the RX 6800 cards, the 6900 XT includes a single HDMI 2.1, two DisplayPort 1.4, and one USB-C video output. If that doesn’t meet your needs, keep an eye out for third party cards. We’ve heard there will be RX 6900 XT cards from AMD’s AIB partners (contrary to some earlier rumors), which makes sense as anyone making an RX 6800 XT could use the same design for RX 6900 XT. We’re not sure when those cards will be available for purchase, however.

There are two 8-pin PEG connectors for power, rated for 150W each. Combined with the 75W from the PCIe slot, power should be more than sufficient for normal operation. We did see slight power spikes when starting up certain workloads (FurMark, specifically), but these shouldn’t pose a serious problem to any quality power supply that can deliver 850W. We do recommend using a single rail PSU if possible.

MSI Afterburner still doesn’t support RX 6000 series GPUs at present, leaving us with AMD’s built-in overclocking tools. We could just use Rage Mode, but all that seems to do is raise the power limit, so we set about doing some manual tuning.

Memory seemed easy enough to max out, and cranking the power slider to maximum as well doesn’t generally pose any problems. That leaves the GPU clock, voltage, and fan speeds, the latter of which we tuned to favor cooler temperatures over quieter operation. We set the RAM to 2150 MHz, dropped the GPU voltage to 1125 mV (down from 1175 mV), and set about testing.

We started by looping the Unigine Heaven 4.0 benchmark in a window at 1440p extreme, then bumped up the GPU clock to 2600 MHz to check for stability. We found that the power limit becomes a factor long before the maximum boost clock comes into play. With a 115 percent power limit in place, that gives the GPU up to 345W of power, and that’s pretty close to where it landed. Clock speeds then fluctuate according to the demands of whatever game or workload is running, with average clocks in the 2400-2550 MHz range.

While Heaven proved stable in our initial tests, we did encounter some issues in a few other games, which eventually led to the slightly revised overclocks you can see above. We dropped the RAM 10 MHz to 2140, bumped the voltage back to 1150 mV, and that seemed to fix the problems. Additional time spent tuning might eke out a few more MHz, but for most users, simply enabling Rage Mode would do most of the dirty work — or set the RAM speed to 2100 and max out the power slider for a slightly higher result.

It’s worth noting that while AMD lists the official boost clock of the RX 6900 XT as 2250 MHz, in AMD’s own drivers, the boost clock shows up as 2519 MHz. You won’t normally see clocks quite that high, but you could with Rage Mode. In that sense, AMD has taken a page out of Nvidia’s book by advertising a lower boost clock than what you’ll get in many games. We appreciate this, and the combination of increased power limits and a minor bump to the maximum boost clock gave us a decent result.

Overclocked results are present in our benchmark charts, but not in the DirectX Raytracing (DXR) suite. The net improvement was around 5 percent, and 7 percent at 4K, which isn’t that much of a boost to performance. There’s a decent chance third party cards may come with better factory overclocks than what we achieved.