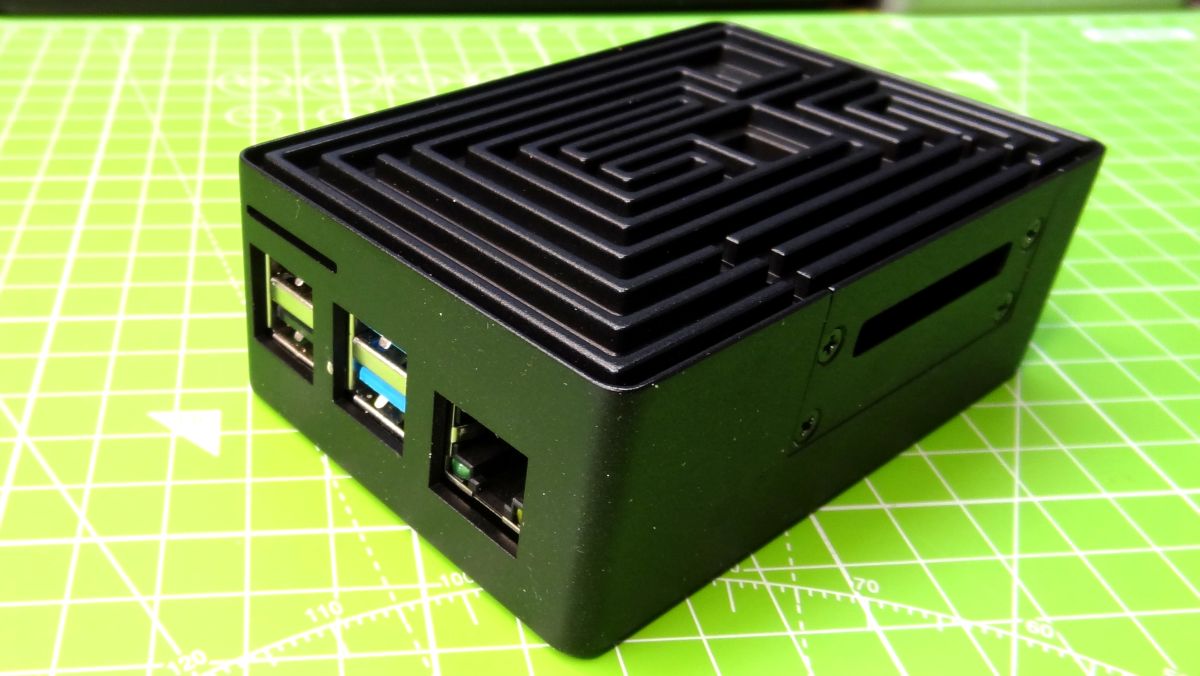 Akasa is no stranger to unusual Raspberry Pi cases. Their previous case, the all aluminum Gem Pro, featured a unique “gem” pattern and provided impressive passive cooling for $32. Akasa’s latest case, the $33 Maze Pro is a smaller. less “in your face” case with an unusual maze pattern designed to quickly remove heat from the Raspberry Pi 4.

The Raspberry Pi 4 has been with us for some time now, and it is well documented that it runs hotter than previous models. Whether your goal is to replace your desktop with a Raspberry Pi 4, consume media or power your Chia farm then a silent case can make all the difference for your performance. Can the Akasa Maze Pro keep our Raspberry Pi 4 cool enough to earn a place among the best Raspberry Pi cases?

Design of the Akasa Maze Pro

There is no dedicated slot for the official Raspberry Pi display, but with care this can be routed via the slot intended for the micro SD card. Next to the micro SD card slot are a power button, connected to the GPIO and a Wi-Fi window. The Wi-Fi window is an odd thing, but it appears to be an opening to afford the onboard Wi-Fi of the Raspberry Pi 4 the chance of connecting without interference from the aluminum chassis.

The underside of the case is nothing more than a means to close off and protect the underside of the Raspberry Pi. What we are all interested in is the top of this case, and here is where we learn why the “maze” moniker was given to this case. The maze is not something that we will solve with a ball bearing; rather it is a novel way to add an aesthetic flair while providing plenty of surface from which heat can dissipate. Akasa have a history of unusual heat sink patterns, Akasa’s Gem Pro is a striking and efficient case which features a “gem” pattern designed to offer a greater surface area for heat dissipation.

GPIO access is possible, if a little cramped. By removing four screws we gain access to the GPIO (see Raspberry Pi GPIO Pinout) but the direct use of HATs and other addons is out of the question. Using an adaptor cable would mitigate this issue. Using the pins with jumper jerky is manageable, but it will test both your dexterity and eyesight when trying to identify the pins in the darkness of the case.

Building the Akasa Maze Pro is simple. In total there are four screws which hold the base of the case to the top, and inside the case we have two “posts” designed to press on the main Arm processor / SoC and the power management IC (PMIC) which is known to operate a little warm.

There is no cooling for the RAM or VL805 USB 3.0 controller. The Raspberry Pi 4 is mounted upside down to the case lid using four screws that go through the bottom of the case and provide the physical pressure to hold the SoC and PMIC to the posts. Before we fix the Pi in place, we need to connect the included power button to the GPIO.

Whether you’re browsing the web, playing games, running a home server, hosting a media player or farming Chia, the Akasa Maze Pro will provide silent cooling for all your basic needs. It even stays cool enough to avoid throttling when you overclock your CPU.

We powered on the Raspberry Pi 4 and left it to settle for five minutes, after which we measured the idle temperature at 34 Celsius (93.2 Fahrenheit). We then ran the stressberry automated benchmark and the temperature rose to 44.3 Celsius (111.7 Fahrenheit) and then settled back down to 37.9 Celsius (100.2 Fahrenheit). These temperatures are good, not as good as Akasa’s Gem Pro, but that is a larger case with more aluminum to dissipate heat.

Repeating the test procedure and pushing the CPU to 2.1, GHz we saw the idle temperature rise slightly to 36 Celsius (96.8 Fahrenheit). Running the stressberry test and the temperature rose to 54.5 Celsius (130.1 Fahrenheit) well under the 85 Celsius hard limit that triggers the CPU to throttle.

The Akasa Maze Pro, is an unassuming case that looks good and keeps everything cool without making noise. It is smaller than the Gem Pro and thankfully it also lacks the sharp corners of the Gem Pro. It may not cool as effectively as the Gem Pro, but it provides great cooling for a passively cooled case, which is good enough to avoid throttling even when you overclock your Pi 4.

Access to the camera and the power button are nice features to have and add some value to the case. The GPIO access is bearable but by no means is it ideal. We can remedy this issue with an extension cable, but this will make the power button non-functional.

However, at $33, the Akasa Maze Pro is more than double the cost of the Argon Neo, our favorite case, which supports both active and passive cooling and triple the price of the Pimoroni Pibow Coupe 4, which benefits from having a fan but is also an excellent case with easy access to the GPIO pins. In order to really benefit from the Akasa Maze Pro, you have to really love the design, not just the functionality.